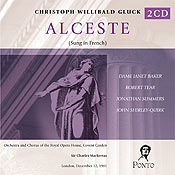 |>. Alceste, Reine de la Thessalie||Dame Janet Baker|
|>. Admète, Roi de la Thessalie||Robert Tear|
|>. Le Dieu Hercule||Jonathan Summers|
|>. Le Grand-Pretre d’Apollon||John Shirley-Quirk|
|>. Un Dieu Infernal||John Shirley-Quirk|
|>. L’Oracle||Matthew Best|
|>. Le Hérault||Philip Gelling|
|>. Le Dieu Apollon||Philip Gelling|
|>. évandre, confident||Maldwyn Davies|
|>. Coryphées||Elaine Mary Hall|
|>.  ||Janice Hooper-Roe|
|>.  ||Mark Curtis|
|>.  ||Matthew Best|
|3=. Orchestra and Chorus of the Royal Opera House, Covent Garden|||
|3=. Conductor: Sir Charles Mackerras|||
|3=. London, December 12, 1981|||
*Ponto PO-1035 [2CDs]*
This two-disc performance was performed and recorded on December 12, 1981 at Covent Garden in London. The recording is one of a series of Ponto releases dedicated to Dame Janet Baker, who performs here the role of Alceste. This drama, a collaboration between Gluck and the librettist Calzabigi, was performed in late 1767 and is based on the tragedy by the ancient Greek poet Euripides. It was written in response to Empress Maria Theresa’s grief over the death of the emperor, given that the text is practically synonymous with conjugal devotion. Calzabigi’s libretto specifically emphasizes Alceste’s sacrifice for her husband throughout, and is dedicated to Maria Theresa. The staging of the opera was delayed by a number of other royal deaths in 1767. Alceste was revived in 1770.
The performance is good for one recorded prior to the authentic performance movement, and is sung in the French rather than the Italian version. Dame Baker’s rendering of the main character is well done, as are other supporting cast members, such as Robert Tear as Admete and Jonathan Summers as Hercules. The Romantic sound of the instruments is difficult to get around, but again, this recording was produced as a tribute to Dame Baker, not as an authentic performance of a Baroque opera. Some of the duets and trios are especially poignant, such as the aria “Alceste, aux noms des Dieux!” sung by Alceste and Admete in the third act. Overall, an excellent recording of one of Gluck’s and Calzabigi’s innovative operatic collaborations.
Dr. Brad Eden
University of Nevada, Las Vegas