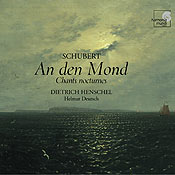 Beyond his song cycles and collections like Schwanengesang, Schubert’s Lieder can be grouped in various ways. In this recording, the baritone Dietrich Henschel and pianist Helmut Deutsch selected twenty Lieder that reflect the ideas of wandering, night, and death, as stated on the jacket copy of this CD. Some of the music chosen is predictably part of this kind of selection, as with “Der Wanderer,” D. 649, “Der Wanderer an den Mond,” D. 870, and “Auf dem Wasser zu singen,” D. 774, while others may be less familiar. The Lieder are from different times in Schubert’s career and include various poets, not only the more famous ones like Goethe and Schlegel, but also figures whose reputation may be attributed to the composer’s settings of their verses.
Henschel’s selection of Lieder constitutes a kind of Schubertiad that celebrates some of those darker themes that emerge in individual Lieder. While it is difficult to imagine anyone missing the themes of songs like these, they are sometimes eclipsed in recordings which span from the traditional cycles to the complete works. The decisions to pursue such a “middle ground” of thematic selections is less common and, perhaps more difficult, since the result can sometimes come off as contrived or, at least, a bit forced. Nevertheless Henschel has done admirable work in assembling a collection that is, thematically related and, above all, satisfying musically.
This recording represents some fine performances on the part of Henschel, whose nimble baritone voice is suited particularly well to Schubert’s music. In a less familiar Lied like “An die Apfelbäume,” D. 197, the declamation he brings to the piece convincingly blends with his very natural lyricism. Henschel brings an intensity of line to that particular piece, as well as to the one that follows it in this recording, “Liebesrausch,” D. 179, where the sensitivity to dynamic levels by both the singer and pianist work well in conveying the meaning of the text. When he is loud, Henschel never betrays a shrill or strident tone. Rather, his voice projects a comfortable volume that is supported well by the accompaniment. When Henschel is intense, it is never harsh, but rather, he uses it expressively, which also connotes his passionate involvement with the music.
Likewise, Deutsch – an appropriately chosen name for someone associated with performing Schubert’s music – brings a sensible and idiomatic style to the accompaniments, including some of the more angular piano writing that is part of some Lieder. With “Lebensmut,” D. 883, for example, the somewhat clichéd opening is handled discreetly so that not even the slightest sense of parody enters into the performance. With some of the more demanding accompaniments, as with “Der Schiffer,” D. 536, Deutsch supports the voice without intruding upon it. In all, the two performers work together well in this recording, which also benefits from an extremely sensitive and effective volume level, as well as a warm, resonant ambiance. The overall sound is rich and resonant, so that the nuances both performers bring to the recording are reproduced well. If the sound is more immediate than would be heard in a live recital, such intensity serves the music well. The result in a richly detailed Lied like “Auf dem Wasser zu singen” is quite memorable, since the accompaniment comes across as clearly as the voice in the kind of chamber-music quality that makes this performance notable.
In terms of presentation, the CD includes a well-produced booklet that is bound to the CD case. The notes and sung texts are presented in German and translated into English and French. In fact, the liner notes by Walter Rösler are well written and concise, such that the texts and translations emerge as the prominent element in the booklet. Moreover, the texts are printed clearly and without crowding, something that is not always common in recent CDs. Such attention to details supports the fine performance, with the entire package being quite commendable. Those who appreciate the genre and know the literature should not be disappointed by this recent Henschel’s An den Mond.
James L. Zychowicz
Madison, Wisconsin