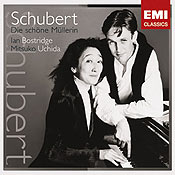 In some circles, Bostridge isn’t fashionable, perhaps because he achieved success so early, because he didn’t come up through the choirboy route, and, perhaps most of all, because he is so startlingly different. But those with a real interest in intelligent music making would do well to ignore the clichés and really listen to this. It’s an experience to change most perceptions of the cycle, and indeed of Schubert. This is no quaint bucolic romp. The protagonist kills himself, doomed even before he meets the girl. As Bostridge points out, the poet Wilhelm Müller said it should be “im Winter zu lessen.” The songs refer to Maytime and blossoms, but since Nature itself is destructive, this is just seductive sham. This cycle is to read in the spirit of a harsh Prussian winter, not an innocent Austrian spring. Schubert picked up on the inner meaning of Müller’s poetry because he had himself just been diagnosed with syphilis — the AIDS of his era. He had no bucolic delusions. He knew only too well that Nature can turn love into death.
Bostridge has gone far beyond tradition, back to the root issues in the music. No wonder he disturbs the conventional! Yet his understanding of the background is authoritative, well researched and psychologically unassailable. This is the version that comes closest perhaps to what Schubert and Müller might have felt, yet also resounds for us, who live in the 21st century. The only precedent is the recording by Matthias Goerne and Alfred Brendel, which scandalised many. Goerne’s reading focussed on the psychopathology of the teenage suicide, a haunting analysis into the depths of a broken mind — a Wozzeck Schöne Müllerin, perhaps. Bostridge keeps scrupulously faithful to the score, and his interpretation fits better with the period. Romanticism, with its interest in the irrational, swept away the certainties of the Age of Reason. Gothic horror was an attempt to deal with the subconscious, the beginnings of a more questioning sensibility. The Romantics hadn’t discovered “psychology” as such but expressed dark feelings in terms of the supernatural. Bostridge appreciates the link between this cycle and Erlkönig. Nobody does supernatural better than Bostridge. Hans Werner Henze was so fascinated by Bostridge’s ability to express wild, transfixed emotion intuitively, he wrote the remarkable Sechs Gesänge aus dem Arabischen for him. Others have performed that cycle, but none come anywhere near its horrifying, otherworldly mystery.
Uchida’s playing may seem dominant in comparison with more self effacing accompanists, but this is precisely the point, in this interpretation. The brook is a malevolent, elemental entity, with a will of its own, far stronger than any mortal. Her playing is, appropriately, demonic, despite the deliberately coy moments of lyricism. Bostridge has journeyed far from his seminal Die Schöne Müllerin for Hyperion so many years ago. His voice has deepened and rounded out in the lower ranges, and he is more assured. The last few years have brought out a steely firmness of character, which shows in his decisive diction and phrasing. He’s learned not to push emphases too far, and to let the innate musical line shine through, as his recent Winterreise with Leif Ove Andsnes shows. He is singing better than ever. Combined with perhaps the most intuitive understanding of repertoire in the business, he is a force to be taken seriously and respected. Uchida pushes him and he responds. Her brook is Nature’s capriciousness personified. But Bostridge’s miller fights back. I’ve never heard such a defiant “Eifersucht und Stolz.” In the final “Wiegenlied,” the brook cradles its quarry, with twisted, psychotic love. Nonetheless, this miller has stood up to it with dignity. Frankly, a version performed with such intelligence, commitment and insight deserves being listened to with insight.
Anne Ozorio