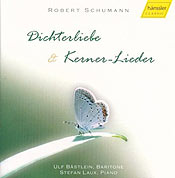 Ulf Bästlein’s recent compilation of Lieder by Schumann presents fine performances of the works listed in the title, the cycle Dichterliebe (to texts by Heinrich Heine) and the Liederreihe usually referred to as the Kerner-Lieder for the twelve settings of poetry by author Justinus Kerner. It also contains some songs that may be less familiar, including several other settings of Heine: “Der arme Peter,” op. 53, no. 3, “Die beiden Grenadiere,” op. 49, no 1, and the late work “Dein Angesicht,” op. 127, no. 2. This is a rich and focused program that offers some of Schumann’s finest Lieder on a single disc.
The bass-baritone Bästlein is well known for his work with Lieder, since he has explored the repertoire widely in his own performances, as well as in his teaching. He is involved with the Lieder Festival in the city of Husom, and other efforts to further the genre. It is rare to find such an informed musician, whose interests span the gamut of the Lied, from its origins in the eighteenth century to modern expressions of German song in the twentieth century. In fact, Bästlein’s accompanist, Stefan Laux, may be regarded as a kindred spirit because of his own broad interest in Lieder, which also spans a similar range of music in this genre and, especially, pieces by composers of the New Viennese School. Thus, a recording by these two gifted and informed individuals is very welcome.
The performances are, in general, thoughtful and sensitive. Both musicians let the music speak for itself and refrain from affections that bespeak an individual approach that is calculated to make a mark. Rather, the tempos fit the sense of text, and this aspect of performances emerges clearly in all the Lieder, from the pensive “Im wunderschönen Monat Mai” that opens the Dichterliebe to lighter pieces, like “Die beiden Grenadiere,” with its Teutonic evocation of the Marsellaise. Dynamics reflect the score well and, again, nothing is excessive such that the text is ever obscured or, worse, misrepresented by the performers. A telling point is “Ich grolle nicht,” the crucial song at the center of Schumann’s Dichterliebe, which Bästlein presents with admirable intensity and accuracy. The evenness of his vocal tone is evident in this familiar piece. Likewise, the song that follows it in the cycle, “Und wüssten’s die Blumen” requires a deft pianist, whose facility must not obscure the voice, but rather support it with his own musicianship, and Laux does this well. The outburst of virtuosity at the song’s conclusion is appropriate and wholly in the spirit the work as a whole.
While most of the Lieder recorded here are settings of Heinrich Heine’s poetry, the Kerner-Lieder are notable because these well-written pieces are sometimes overshadowed by Schumann’s other song collections. In his notes to this recording, Joachim Draheim mentions how closely Schumann’s settings of these poems recalls in some ways Schubert’s music, and this becomes apparent in the subtle way the two performers execute the songs. Songs like “Wanderlied” and “Wanderung” make use of triadic figures that recollect some aspects of Schubert’s style and also anticipate some the style Mahler would use for some of his settings from Des Knaben Wunderhorn. At the same time some of the Kerner-Lieder anticipate the elegiac character that Schumann would refine in some of his later vocal music. “Alte Laute,” the last of the set, anticipates in some ways the reflective quality that makes the Dichterliebe memorable. One does not have to look for far to hear such connections, since the performers make them elegantly clear in this recording.
James L. Zychowicz
Madison, Wisconsin