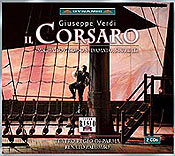 Alessandro Trovato’s admirably honest and forthright booklet essay (translated by Daniela Pilarz) for this Dynamic release of Verdi’s Il Corsaro goes a long way to explaining why this ranks as one of the master’s least-performed works.
First, the opera fulfilled a contract that Verdi clearly wanted to bring to a close. Verdi had at one time found the story of passing interest, but in the end he set to work on a libretto he had deemed unworthy, without requesting any significant changes. Once the first performances passed, to a cool reception, Verdi apparently made no effort to revise the score. Instead, he went on to a new publisher and great, everlasting fame.
Il Trovatore would secure much of that fame, and Il Corsaro shares more than the definite article with that wild, garish melodramatic masterpiece. Although the plot of Il Corsaro may at first seem like the dramatic counter part to Mozart’s Abduction from the Seraglio, with its harem and cruel pasha, in outline the future masterpiece of Trovatore can be seen — the hero outside the law, trying to rescue a damsel in distress from a nasty baritone, only to be captured himself, and with his beloved poisoning herself just before his own sudden demise (here a suicide).
Dynamic is a label that relishes such rare repertory, and so they set up their microphones for a performance at the Teatro Regio in June 2004, and the handsome photographs on cover and in booklet suggest a lively, colorful, very traditional production.
The recording, however, only offers the voices (although extraneous stage noises make intermittent intrusions). With one exception, the cast features younger, less well-known singers. The swashbuckling title role goes to Zvetan Michailov, who has a manly tenor to match a handsome appearance, as evidenced by the booklet cover. Neither strength nor weakness distinguishes his performance; perhaps in person he has more charisma.
The two sopranos offer even less. The corsair’s true love, Medora, gets a wobbly portrayal from Michela Sburlati, and the tragic slave girl Gulnara offers not much respite. Adriana Damato, a stunning young woman in the photos, has a prematurely aged voice that makes one fully sympathetic with the corsair’s decision to return to his other love — until she opens her mouth.
The veteran Renato Bruson has the role of the nasty Seid (a “vile Muslim,” in the truly politically incorrect libretto). A man with a great career behind him, this recording sadly documents his decline. The intelligence that guided him through many successes is still there; the voice simply is not.
Renato Palumbo leads the Teatro’s orchestra and chorus in an emotional yet disciplined performance; he is the true star of this recording.
Not easy to find, the Philips recording, part of a series devoted to early Verdi mostly conducted by Lamberto Gardelli, offers much too high a challenge to this Dynamic set. Caballé, Carreras, Norman — they make a much, much better case for this score, as does the Sied, Gian-Piero Mastromei. He may not have had the career of Bruson, but in this role, he emerges the superior singer.
The booklet offers a libretto in Italian and English along with the names of the orchestra and chorus members, but no biographies of the singers or conductor. Strangely, the synopsis in English omits the first scene.
If one wants a complete set of Verdi’s operas and cannot find the Philips anywhere, this Dynamic set make an acceptable compromise, especially for those more able to forgive certain soprano weaknesses than your reviewer can. For anyone else, the wait for the Philips to reappear, or the cost of locating it at an overseas CD shop, should be worthwhile.
Chris Mullins
Harbor Teacher Preparation Academy