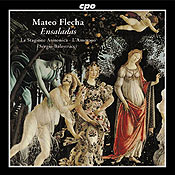 This is a recording that makes a full meal of various salads: in this case, several ensaladas by the Spanish composer most associated with the form, Mateo Flecha, the elder (?1481-1553). Ensaladas toss together different languages and verbal quotations (sometimes musical quotation, as well) in a quodlibet that promotes an appealing sense of variety within the unified frame of their textual themes.
Flecha’s ensaladas were composed in the 1540’s, though not published until his nephew brought out a posthumous edition, Las ensaladas de Flecha, in 1581. The time gap itself would seem to document the persistence of the form, and moreover, the texts’ association with Christmas themes would have given them a broad appeal. The three ensaladas recorded here are extended works that treat spiritual themes with metaphor and a degree of narrative invention. “La Justa,” for instance, recounts a jousting tournament in which Lucifer, the knight of Lady Envy, wields his lance of gluttony against Adam, armed with his lance of innocence. When Adam falls in the field (the fall from grace) a new knight must take up the fight to redeem sinners. Who is the new knight? Christ, armed with the lance of righteousness. In “El Fuego,” various aquatic tropes (the waters of penance, Jesus’ birth as the flowing forth of the purest stream, Jesus offering living water) are placed in opposition to the fire of sin. If the themes are spiritual, the language itself is unlofty, and peppered with vernacularisms. Didacticism seems never to overwhelm the popular tone.
The music is contrapuntally simple and features long stretches of reduced textures. Sometimes, too, the infectious rhythmic spice of Spanish dance rhythms enlivens the music in ways that underscore its popular style. The performance by La Stagione Armonica is somewhat mixed. They bring to their rendition a stylish sense of phrasing and inflection and, where called for, an engaging rhythmic verve. However, the overall sound of the ensemble seems to suffer from a lack of clarity and definition, with too many singers on a single line, compounded by ample instrumental doubling, the culprit. This is especially noticeable in the many duo and single-line passages, but is also problematic for the tutti, as well.
The recording also features a number of instrumental pieces by the famous blind organist, Antonio de Cabezón. Mostly diferencias, or variation sets, they are played by a colorful ensemble combining winds and strings. The florid passage work is handled by the solo cornettist, Marie Garnier-Marzullo, with a natural ease, lyrically propelled by soft, period articulations. And both cornett and viol consort possess a distinctive vocality in their playing in the shaping of the phrases and in the richness of vowel in their sound.
All in all, this meal of salads left me a bit hungry for a main course, but at the same time, there was certainly much pleasure in the eating.
Steven Plank
Oberlin College