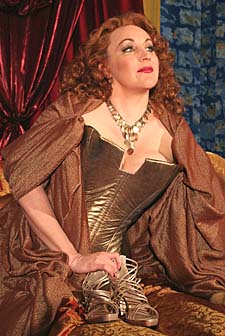 Emily Pulley (Vanessa)
Central City gives “Vanessa” its due
By Kyle MacMillan [Denver Post, 7 Jul 05]
Central City – Perhaps because of its home in a small, historic mining town far from the two coasts, Central City Opera has long championed American opera.
For an assortment of reasons, including a long-standing cultural bias toward all things European, few works composed in this country have reached anything approaching a regular place among the operas presented by major houses.
Hovering on the fringe of the standard repertory for decades has been Samuel Barber’s “Vanessa,” which premiered at the Metropolitan Opera in 1957-58.
Click here for remainder of article.
Click here for additional information on this production.