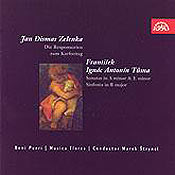 In the Baroque era, the liturgical intensity of Holy Week and the affective richness of its themes would find a powerful echo in the music of various European chapels. Old-fashioned counterpoint on antique models would solemnify the sound, while the expressive harmonic freedoms of the day would bring the affective sense of words and themes into sharp focus. This dual path is much in evidence in the Responsories for Good Friday by Jan Dismas Zelenka, recorded here by the Czech ensembles, Boni pueri and Musica Florea.
Zelenka, one of the most prominent of the eighteenth-century Bohemian composers, was a pupil of both Johann Joseph Fux in Vienna and Antonio Lotti in Venice. Fux, the author of the counterpoint treatise of the eighteenth century (and beyond), the Gradus ad Parnassum, would have undoubtedly furthered Zelenka’s fugal mastery, and the Responsories offer frequent chance to savor it. Some of the fugal sections are, admittedly, straight forward and not without a degree of predictability, but where Zelenka introduces expressive contours and rhythmic animation, they are strongly compelling examples of his contrapuntal craft. With the addition of a heightened harmonic vocabulary (not unlike what one hears in Lotti’s well-known settings of the Crucifixus), Zelenka’s settings on occasion can rise to a memorable singularity, as in “Caligaverunt oculi mei.” The most intense of the set, this responsory deploys luxuriant suspensions, augmented sixth chords, and expressive contours, in a richly affective setting.
Not all of the responsories rise to this level, and indeed, one may find that programmatically the set of nine taken together without liturgical context, is a heavy load. However, the choir’s alertness to expressive demands can offset this to a degree. In “Vinea mea electa,” for instance, the rhetorically articulate delivery of “crucifigeres” is immediately and powerfully engaging. That said, the performances fall short in other ways. Words are difficult to understand, and, as Zelenka is particularly alert to their setting, this is regrettable (as is the absence of text translations in the program booklet); melismas are slurry; and the choral sound with its characteristic chesty vibrancy from the boys mitigates against a timbral clarity that would well serve the style.
The recording includes several instrumental works by the Bohemian composer, Frantisek Tuma, played with panache by Musica Florea. One wishes, in the end, that the stylistic manner and timbre of the instrumental ensemble might have been more influential on the singing.
Steven Plank
Oberlin College