She judiciously mixed some of these songs with specific Christmas items and made it a bestselling classical album. Since that time all major singers have recorded recitals of ìcanti sacri.î Depending upon the number of carols, these were sometimes presented as Christmas albums, though even then there was usually no escaping the two Ave Marias, Louis Niedermeyerís Pieta Signore, Franckís Panis Angelicus, H‰ndelís ode to the shade of a tree and a few Mozart or Bach items ó none of which has anything to do with Christmas. Deccaís marketing division and RenÈe Fleming have decided that itís better to split these things more rigorously and so together with these ìsacred songsî she recorded a ìcarol album only,î which corresponds with her current concert tour.
Flemingís repertoire on this CD is almost wholly traditional, while Terfel is more adventurous, though it nevertheless roams along in the same sphere. And there is indeed no escaping Bach/Gounod, CÈsar Franck or Amazing Grace on both records. So why did I feel such a marked difference when listening to those two great vocalists? It starts with the title of their albums. I donít think there is anything sacred to Humperdinckís H‰nsel and a lot of the other items on Flemingís CD were definitely written by their composers to catch some not very sacred money. Therefore a less pretentious title like ìSongs of Faith and Devotionî would maybe have been a better idea. Though ìThe Lordî and ìGodî is as much present on Terfelís CD, his ìSimple Giftsî someway makes a more sympathetic impression. Then there are the sleeve photographs: just Terfel looking earnestly into the camera while Fleming is photographed with eyes closed into what looks far more to be an orgasmic moment than a prayer of faith; and I have a feeling that some of the less enthusiastic reactions to Flemingís CD were initiated by title and photo.
But of course Fleming got a lot of flack on her singing as well. Some comments on those venomous opera-forums spoke of H‰ndel ‡ la Duke Ellington. This is simply not fair as she doesnít glide or scoop. True, she uses all kinds of allowable vocal tricks like rubato and a good trill, which are arms not all sopranos have. The first impression after her first tracks Ave Maria and Jesus bleibet is one of ìhow exquisite, how refinedî and then first weariness and finally boredom makes its entrance. So whatís wrong in a CD-recital that would not have been boring on 78-records? Well, by the third track one realizes that she is not going to use her full voice and that she will never sing out; that everything will stop at mezza-voce while in that half voice she tries hard to unveil all hidden meanings in each word, if necessary in each syllable by voice inflexions. Moreover as she is nowadays the female star of the label, she suffers from what Iíd call Kohnanization, though Domingo and Eugene Kohn are not the only perpetrators. Classical stars nowadays prefer to bring either their own maestros with them or otherwise want to be indulged by the conductor whom they honour by allowing him to have their name as well on their records. So Andreas Delfs nicely follows Fleming but definitely was not engaged to tell her some truths and to bring some vitality to the recording sessions. Once upon a time, Karajan conducted the Price Christmas recital, Gavazzeni led Bergonzi in his dÈbut recording and Molinari-Pradelli put the fear of the gods in Sutherland and no singer would have got away with these kind of easy tempi. Levine, Solti, Mackerras, Eschenbach, Tate were the conductors of Flemingís many successful earlier recordings; and in retrospect one realizes that they were sympathetic to the artist without sapping all rhythmic liveliness from the CD, indulging every whim of the singer (and you didnít need a looking glass to find their names on the sleeve). 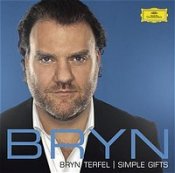 That too is one of the differences with the Terfel recording. Barry Wordsworth may not be a big name either as a conductor but he doesnít linger on and at least gets his photograph in the booklet (or Terfel himself has a far better sense of tempi). Not that everything is perfect in this record as it shows some serious vocal problems. The bass-baritone who came in second after Dmitry Hvorostovsky in the Cardiff competition in 1989 has made some far fetching decisions. Though the voice has the tessitura of a real bass-baritone (I heard him do a fine Dulcamara in Amsterdam a few years ago), Terfel was blessed with good top notes and he couldnít keep his hands off real baritone territory. His Amsterdam outing as Scarpia was not really a success. Moreover he has now stepped into heavy Wagner with some successes in Rheingold and Walk¸re but recently he withdrew as Wanderer in Siegfried. The low and middle register are still very beautiful but the voice really makes a clearly unmusical jump which sometimes almost becomes a shout to reach an F; and, as he does it several times on this record, it is clear he has somewhat damaged his vocal means.
Terfel doesnít have Flemingís intrinsic beauty of voice, indeed his timbre is somewhat indistinct, but his sense of phrasing and words is far greater. His Sondheim-song is particularly impressive. He too sings a lot in warm toned pianissimo but realizes that parts of some songs demand full voice. And then there is the repertoire: maybe not very adventurous but still known to most opera buffs who collect drawing room songs and ballads by Crooks, Kullmann and friends; and one can easily savour Terfelís fine English pronunciation without his losing the vocal line. The CD offers us two duets with baritone-colleague, Simon Keenlyside, who clearly makes a bigger noise than Terfel (on record at least), though the voice has nothing of the beauty and the subtlety of the Welsh singer. Clearly I could easily have done without his part; but it is a nice reminder that Terfel, notwithstanding some vocal problems, is still a great artist.
Jan Neckers