Having learned from the PBS website that it was a project by the English National Opera to find ìundiscoveredî opera talent among the average Joes and Janes of the U.K., with the finalist(s) winning a chance for coaching and training leading up to performing a lead role in an ENO production, my reaction was mixed. On the one hand, I am all in favor of making opera more interesting and accessible to the public, and a contest like this is a good way to capture the public imagination as people see someone whose everyday life is like their own being raised to the glamorous world of grand opera. On the other hand, while my own vague dreams of having an operatic career were pragmatically shortlived, I have spent enough time in opera workshops and among semiprofessional singers who aspire to professional classical careers to know that the world is already full of very talented artists who will never get that level of recognition, despite years of solid training and sacrifice. I donít count myself among those aspirants, so I listened to the two discs I was sent with interest and as much objectivity as I could.
The ìOperatunity Winnersî disc is a compilation of the two finalists, sopranos Denise Leigh and Jane Gilchrist, singing famous operatic arias and duets that are for the most part suited to their lyric voices, both light enough to handle coloratura comfortably, although Jane Gilchristís is enough heavier that she sings the Countess to Denise Leighís Susanna in the selections from Le Nozze di Figaro (including the famous letter duet, as well as ìPorgi amorî, ìDove sonoî and ìDeh vieni, non tardarî). Since both finalists split the role of Gilda in ENOís Rigoletto, there are tracks of each of them singing ìCaro nomeî, although they are separated from each other by the Mozart, as well as some other very familiar and beautiful pieces, such as the flower duet from Lakme, and arias ranging from Gilbert and Sullivanís ìPoor Wandering Oneî to ìCasta Divaî.
I will say I was more impressed by the singing than I had expected to be. Reading the bios of the two finalists made it clear why: both have had either classical vocal training or performance experience, or both, in the past, and they received several months of additional training and coaching as part of the contest. So, while they have not had the years of preparation that most operatic professionals receive, they are not exactly people whose singing has moved directly from the shower to the big stage.
Pragmatically listening to this disc, I am fairly convinced that the target audience is not the seasoned opera lover looking for exciting new artists. None of the recitatives are included with the arias, which allows us to get right to the hit tunes, but omits the crucial aspect of operatic performance in which the artist is required to express the thought leading up to the aria in a language that is often not the singerís native one, without the support of the melody to carry the message. It was also rather startling to hear Denise Leighís very light, pure voice launch into ìCasta Divaî. It made for an unusually youthful and vulnerable sounding Norma, which we of course never hear because to sing the entire role requires so much more artistic experience and sheer vocal power than a singer would be likely to have at this point in their career. Both women are capable of singing all the notes they are given with good sound, breath control and intonation, but I miss some of the subtleties of dynamic range and, dare I say it, the ability to communicate through the music that comes from years of immersion in the language and the style of the particular composer. In short, I doubt that any of these performances will make you forget that of your favorite great diva in the role.
But there is enough to like on these discs of two gifted women singing some of the most deservedly celebrated music in the lyric soprano repertoire, that I can see value in them. I look at the phenomenon of Andrea Bocelli, who achieved spectacular fame on the basis of a style of singing that was not exactly operatic, but close enough that he could sing opera arias to pop audiences to great acclaim. I admit I only listened to one of the arias on his Verdi disc before deciding that he had taken enough liberties with the note values that I couldnít really consider it a performance of the aria, but rather of his interpretation of it as a pop artist. Still, I imagine that there must be listeners who first experienced the beauty of opera arias by hearing him sing them, and then became interested in hearing and learning more. Likewise, I can imagine the human interest story of the Operatunity contest drawing the attention of music lovers who didnít think they cared that much for opera, and if they first experience its riches by listening to some of its greatest hits in the voices of singers who can at the very least get their lovely voices around the notes that the composers wrote, that seems to me like a gain for opera in general. 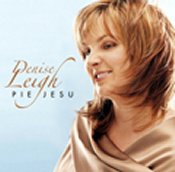 The solo disc by Denise Leigh, ìPie Jesuî, continues in the same vein, with some more of the great hits of the lyric/coloratura repertoire blended with some sacred music (the ìPie Jesuî is that of John Rutter, not FaurÈ, by the way), operetta and traditional music, most of which is well suited to her voice. I have to say that I found the parts of ìMi chiamano Mimiî where the voice should blossom, rather too sharp and piercing. The quality of her voice which makes it special is its ethereal clarity, which comes across well in the Bach and Handel, and especially in the traditional lullaby ìSuo Ganî, where I am just as glad not to be hearing a heavier operatic voice. This purity with presence, which some may associate with angel voices, together with the fact that she appears to be able to connect and communicate with audiences despite being legally blind, leads me to believe that we may hear more of her in the future, perhaps more in concerts and on recordings than, say, on the stage of the Met.
I am tempted to say that these discs could make good gifts for friends or relatives who are not deeply familiar with opera but could be drawn in. The trouble is that the liners offer little more than bios of the artists; there are only explanatory notes about the pieces being performed, no texts or translations. The hook would be purely the beauty of the music and the voices, but, in the end, that should not be underestimated.
Barbara Miller