Videos of the production have been available for many years, and certain detailsósuch as the hydroelectric dam which functions as the setting for the Rhinemaidensí scenes in Das Rheingold and Gˆtterd‰mmerungóhave become almost legendary. Few, if any, of those who purchase this DVD set will be shocked by its contents, and there might be a tendency to regard this recent re-release as simply another re-packaging of familiar material. And yet it is this very familiarity that is so significant. If 1976 marks the appearance of the postmodern Ring, 2006 marks a different moment, in which post-modernism itself becomes historical.
In the most general sense, ChÈreauís production of the Ring can be called ìneo-Shavian.î Like Bernard Shaw in The Perfect Wagnerite, ChÈreau interprets the Ring not so much as an amalgam of Nordic mythology and medieval legend, but as a parable about industrialism. From the plush costumes of the gods in the second scene of Das Rheingold to the oversized iron flywheel that haunts the first act of Siegfried, ChÈreauís production is replete with references to the nineteenth century. These references operate powerfully on the contemporary viewer/listener. Unlike what we can call the ìneo-realistî materials of the Otto Schenk/G¸nther Schneider-Siemssen production (which has dominated the stage at the Metropolitan for two decades), the detritus of nineteenth-century industrialism is still a part of our visual environment: the references therefore seem both historical and contemporary. Through his collage-like use of these visual materials ChÈreau simultaneously locates the Ring in the nineteenth century and in our own time. 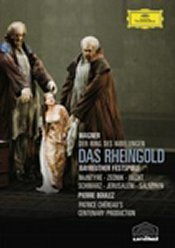 This vision seems clearest in Das Rheingold. ChÈreau takes full advantage of Wagnerís ìanvil musicî in the Nibelheim scene. Alberichís minions look as if their bodies have been distorted by inhuman work in underground mines. The gods in the second and fourth scenes look not so much costumed as upholstered. If there is any problem with their appearance, it is that they look too decadent, too ripe for destruction. Only Donald McIntyreís Wotan asserts the tragic dignity of the godsí situation. Resisting the urge to let the voice fully bloom in the majestic music that opens the second scene (ìVollendet, das ewige Werk . . ì), McIntyre presents a Wotan thatófrom his first appearanceóis deeply conflicted. His lower range may lack some of James Morrisís authority, but McIntyre is a skillful singer and a consummate actor who fully inhabits his role. He carries Das Rheingold, and much of the rest of the Ring as well. 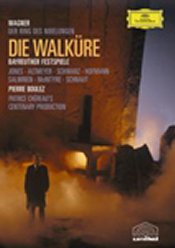 The first act of Die Walk¸re preserves the voice of Peter Hofmann (as Siegmund) before his rapid vocal decline. His undeniable beauty and physical vigor make him a charismatic presence, even if his singing lacks some of the nuance that other tenors have brought to the role. By casting Hunding as a wealthy nineteenth-century merchant, and having him enter with an intimidating group of retainers, ChÈreau underscores the danger that Siegmund faces. Indeed, Matti Salminenís Hunding is so menacing that it is hard to imagine that Siegmundóeven with the help of his magic swordówill stand a chance against him. Hofmann also seems to be overshadowed by the Jeannine Altmeyerís Sieglinde. Altmeyerís voice is absolutely radiant, and she brings a sense of urgency to the role that at times borders on frenzy. In part because of her energy, the first act of Walk¸re is perhaps the most successful part of the Boulez/ChÈreau Ring, in which musical and dramatic values completely support each other.
The production loses much of its clarity by the third act of Walk¸re. In the liner notes, the monolith that ChÈreau uses for Br¸nnhildeís rock is likened to one of the ruins that appear in the paintings of Caspar David Friedrich. But to this reviewer, its seems more closely linked to Bˆcklinís famous ìIsle of the Dead.î It seems disconnected from the quasi-industrial visual vocabulary that ChÈreau uses for Rheingold: almost like a throwback to the pre-war designs of Emil Preetorius. Br¸nnhildeís rock in ChÈreauís production is not merely a symbolic failure, but a dramatic one as well: flattening out the stage and restricting the possibilities for dramatic action. ChÈreau seens to recover some of his ground in the first act of Siegfried, where Mimeís workshop gives ample opportunity to recoup the industrial imagery of Rheingold. The forging song, in which Siegfried uses a massive steam press to forge Nothung, is particularly effective. ChÈreau also finds a good solution for the second-act dragon, which appears in this production as a clanking steel-plate behemoth rolled around by industrial workers. But like so many other directors, ChÈreau seems befuddled by the ìfairy-taleî aspects of the plot such as the ìForest Murmursî and the Woodbird. Perhaps ChÈreau lost confidence in his neo-Shavian interpretation of the Ring (this is hard to believe), or perhaps Wagnerís work is simply too diverse to be adequately encompassed by a single directorial idea. In any case, ChÈreauís hand seems to rest more lightly on the final two operas in Wagnerís tetralogy. Our attention is more keenly focused on the singers themselves, on whose abilities the success of the drama ultimately depends. 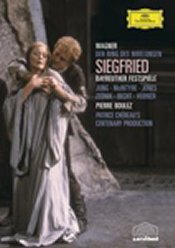 Perhaps the most welcome departure from the conventions of the Ring has to do with the presentation of Alberich. Unlike so many other interpreters of the role, Hermann Becht for the most part eschews the ìBayreuth bark,î and actually sings the role. His portrayal strengthens the drama immeasurably, highlighting all of those many places in the Ring in which we understand the gods and the Nibelungs as two aspects of the same psychic reality. In this production, more than any other, Wotanís description of himself (in the Mime/Wanderer scene in the first act of Siegfried) as ìLicht-Alberichî rings absolutely true. In the second act of Siegfried, ChÈreau underscores the symmetry between Wotan and Alberich by costuming them in nearly identical ways. In the dim light that surrounds Fafnerís cave, the borders between gods, dwarves and men disappear.
Siegfriedóperhaps the most challenging role in the entire tenor repertoireóis admirably sung by Manfred Jung. Jung brings to this role not only tremendous vocal stamina, but also keen intelligence. Shepherding his resources, he is able to master even the most difficult sections (such as the long narration immediately before his death in Gˆtterd‰mmerung). Jung is not afraid to let Siegfried be unsympathetic and unheroic. He is not a particularly subtle singer, but for this interpretation of the role, he doesnít need to be. Indeed, it is precisely because Jung creates such a brutal, coarse, unformed Siegfried in the third opera of the Ring that his transformation in Gˆtterd‰mmerung is so powerful and compelling. In Jungís interpretation, we understand Siegfried as a kind of elemental force similar to the Rheingold itself. He stands for human potential, morally neutral until transfigured by love. 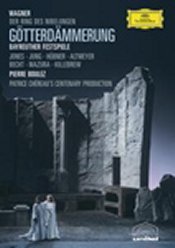