There are those who can say they saw her perform live; then there are those, not even born when Callas died in 1977, who continue to idolize her through recordings. Either group will delight in three digitally-remastered releases by EMI. One is a single discóa reissue of one of Callasí first two albums. The other two are sets, one featuring three discs and the other a collection of eight, clearly enough Callas to keep young and old fans content. 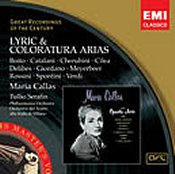 The single disc, issued as one of EMIís Great Recordings of the Century series, is one of Callasí first two solo albums, recorded with Tullio Serafin and the Philharmonia Orchestra (four additional tracks have been added to the original nine, these also conducted by Serafin but featuring the Orchestra of La Scala). All made in the mid-1950s, the tracks feature Callas at her prime. She performs (recording for the first but not the last time) arias for which she would become famous: ìIo son líumile ancella,î from Adriana Lecouvreur, ìEbben? Ne andrÚ lontanaî from La Wally, and ìDovíË líindiana bruna from LakmÈ. The additional Scala tracks include areas from Medea, a role many felt (and still feel) she was born to sing, and from La vestale. If Callas ever performed with a conductor with whom she was in perfect sync, it was Serafin, who partnered her in these recordings with respect and care. Take, for example, the tempo Serafin sets for ìUna voce poco fa,î allowing Callas all the time she wants for embellishing the vocal line. Listeners can compare a second example of Callas singing this piece on the eight-disc collection. Conducted by Nicola Rescigno, the tempo is quickened and it is Callas who must keep up, which she does ably, resulting in a far more exciting performance. 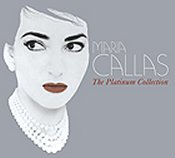 The three-disc set, Maria Callas: The Platinum Collection, includes a handful of the tracks that appear on Lyric & Coloratura Arias as well as arias from Callasí second solo album recorded with Serafin and the Philharmonia: Puccini Arias (which EMI has re-released in its Great Artists of the Century series). These selections, recorded between the mid-1950s and 1960s, present Callas with a variety of conductors and fellow artists, including Giuseppe Di Stefano, the tenor with whom she would make her final tour during 1973-74. Her powerful and agile voice left memorable interpretations of characters like Norma, Manon (both Massenetís and Pucciniís heroines), Donna Elvira, Gioconda, and Aida. Furthermore, following traditions started in late nineteenth and early twentieth-centuries, Callas appropriated repertory from both mezzo- and tenor roles. Her versions of arias for Eboli, Dalila, and Carmen demonstrate the rich colors of her lower range. Her rendition of OrphÈeís ìJíai perdu mon Eurydiceî is an exquisite treatment of Gluckís lyricism. 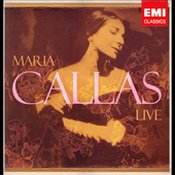 The eight discs in Maria Callas Live are fare for those who would hear the soprano in real-time performances on both the dramatic and concert stages. Complete with the applause and shouts of enthusiastic audiences, these recordings again come from the peak period of Callasí career. The first six discs present excerpts from Norma (Covent Garden, 1952), Il pirata (Carnegie Hall, 1959), La sonnambula (La Scala, 1955), Lucia di Lammermoor (Berlin Opera, 1955), Medea (La Scala, 1953), Anna Bolena (La Scala, 1957), Ifigenia in Tauride (La Scala, 1957), Poliuto (La Scala, 1960), Un ballo in maschera (La Scala, 1957), La traviata (La Scala, 1955), Aida (Mexico City, 1951), Macbeth (La Scala, 1952), Tosca (Covent Garden, 1964), and Andrea Chenier (La Scala, 1955). The concerts were performed in Rome (1952), San Remo (1954), Milan (1956), Athens (1957), Stuttgart, Amsterdam, and London (all 1959), London (1962), and Paris (1963). Despite the digital remastering, these live performances, as one might expect, are less acoustically satisfying than the studio albums. Nevertheless, they offer wonderful examples to hear Callas at her dramatic best. Interesting in this collection is her concert version of the ìLiebestodî in Italian.
As real fans will agree, one can never have enough Callas, but these three re-issues make a good start.
Denise Gallo*