His debts troubled
him, but the financial picture was bright, especially with the success
of The Magic Flute.

And a timely report that was, coming in this year of
celebration for the 250th anniversary of his birth. If his estate could
still collect royalties, what a bonanza it would reap. Universal Music,
the huge conglomerate that owns Deutsche Grammophon, Philips and Decca, has
assembled its own loving tribute to its financial bottom line ó excuse
me, to the memory of Wolfgang ó in the form of many re-releases and
compilations. The market for these must be either newcomers
with next to no CD collection, or just the sentimental sort who wants
to honor the composer’s memory by buying a sampling of excerpts from
complete versions which might very well already be in the purchaser’s
collection. 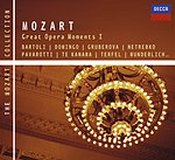 The two CD items here collect arias from recent stars ó Netrebko,
Terfel ó and from the greats of the DG heritage ó Janowitz, Wunderlich.
Great Opera Moments I goes to the beginning and end of Mozart’s career, with the unfinished Zaide, Die Entführung aus dem Serail, Idomeneo, and finally, Die Zauberflöte.Beginning
the collection with Kiri te Kanawa’s lovely “Ruhe sanft” is a
masterstroke, as this aria gets less exposure due to its origin in the
incomplete Zaide. The Idomeneo selections ó 6 tracks of 18 on the disc ó feature the star power of Placido Domingo and Luciano Pavarotti, though neither is most esteemed in Mozart. Netrebko and Gruberova ó the latter featured prominently on both these CDs and the DVD collection ó offer more idiomatic interpretations.

Wisely, the set turns to Wunderlich for the great tenor arias from both Entführung and Zauberflöte. The selections from Solti-conducted sets for both operas have his typical virtues and deficits ó energy and precision, but a lack of sensitivity and insight. Sumi Jo’s Queen of the Night, for example, has all the notes but no edge, no sense of the malevolence of the character. Then the disc ends with the very cute Papageno/Papagena aria delivered very cutely by the cute Cecilia Bartoli and Bryn Terfel. Listeners must consider their cuteness threshold. 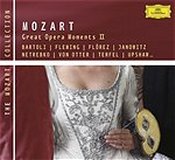 Disc II has the three DaPonte operas and, somewhat surprisingly, Mitridate (instead of, perhaps, Clemenza di Tito). That early opera seria surely has star power to thank for its
inclusion: the two tracks are from a Bartoli set, the first with its
star and the second featuring one of the first recorded performances
from Juan-Diego Florez. Most of Nozze comes from a James Levine set, although the Countess’ great arias are performed by Gundula Janowitz under Böhm. The seven tracks from Don Giovanni have 5 different conductors, but then the three selections from Cosi
all come from the great Böhm recording. Perhaps having one
philosophy for this collection would have made more sense: either
feature particular sets, or make the entire affair a hodgepodge of
artists and performances. Certainly this “greatest hits” approach does
not convey the dramatic strengths of Mozart’s art.

The slim CD booklets have a format for ADD sufferers, with brief notes,
an analysis of one aria with text (not provided for any others), and
ostensibly intriguing “Did you know” factoids.

DVDs haven’t raced to the compilation format, so Amadeus: Mozart DVD Collection may be a test run. Choosing the same title as the famous play/film doesn’t raise one’s respect for the enterprise, but buyers who think they are getting Forman’s endeavor will have to ignore the back of the
case, which describes the contents as “pivotal performances of Mozart’s
operatic masterpieces.” At 90 minutes, a more generous collection
can be imagined. On the other hand, jumping from opera to opera with no
concern for dramatic coherence makes that 90 minutes seem longer.

The DVD opens with color film of Wilhelm Furtwängler conducting the Don Giovanni overture. The historic and artistic values coincide here, but one might wish that Furtwängler’s barber had been informed that the back of the esteemed conductor’s head would be prominently featured. His neck makes for a distracting, even disturbing sight.

Next come four selections from the recent, starry Metropolitan Opera Don Giovanni. This production has neither bold innovation or lush traditionalism, and Terfel’s aggressively unpleasant Don won’t win universal approval.Showing its age, the Böhm Entführungstill has the appeal of its fine cast (Araiza, Gruberova, and Talvela) and a
fine orchestral performance. Only four selections from Nozze seems
rather stingy. Three come from the Ponnelle film (once again
a Böhm affair), and the standout here is a gorgeously languid
“Porgi, amor” from Kiri te Kanawa, looking as beautiful as she sings,
and really conveying the Countess’s ó well, sad frustration at her
husband’s sexual indifference. Terfel’s Figaro from a Gardiner set also
puts in an appearance.

The Sawallisch/Everding Zauberflöte has only faint charm, and the Met’s Hockney production looked better live than it does here, for one of Sarastro’s arias, delivered well by Kurt Moll.

Rainer Trost has nothing special to offer in Cosi‘s
“Un’aura amorosa,” although Gruberova puts on quite a show in her “Per
pieta” from another Ponnelle film. But no trio? No “Come scoglio”? A
short aria from Ponnelle’s Mitridate comes next, sung by an inspired Yvonne Kenny, and then Pavarotti at the Met delivers a beautiful but passionless “Fuor del mar” from Idomeneo. The disc concludes with Bernstein leading Marie McLaughlin (a little off form) in the “Introitus” from the Requiem.

Once again, Clemenza di Tito gets slighted. What does that say about the performance advertised on the inside back cover of the booklet, featuring Troyanos? Only Universal can say. All the bonus features for this disc, by the way, are advertisements for Universal product.

Essentially, these CDs and this DVD are advertisements as well. Which
is all fine ó if they lead the buyers not just to other Universal
product, but into a greater love for Mozart and opera in general. What
value they would have for those already confirmed in such affections
remains doubtful.