Similarly, recent recordings of the two books
illustrate the development of early music performance by Italian ensembles at
the turn of the twenty-first century. The composers are Carlo Gesualdo and
Claudio Monteverdi; the performers, respectively, La Venexiana and DelitiÊ
MusicÊ.

La Venexiana has been producing high-quality recordings for some ten years
now, and their contribution to the discography of the madrigal is
substantial. The present recording, Gesualdo: Quarto libro di
Madrigali (Glossa GCD 920934) is in fact a re-release of a CD made in
2000, with the well-designed gatefold packaging now favoured by Glossa (not
that the previous version was in any way substandard in this regard).
Gesualdo’s Fourth Book dates from 1596, and embodies the
‘transitional’ style, identified by Glenn Watkins in his study of
the composer, between the contrapuntally-based writing of the early years and
the ‘highly personal and affective style’ of Books Five and
Six. The composer had been in residence at Ferrara for two years at the
time of publication of this volume, and had adopted certain traits of
Luzzasco Luzzaschi, a major figure in the development of the madrigal but as
yet one lacking a modern edition. (Luzzaschi is, however, the subject of a
previous CD by La Venexiana.)

The beauty of singing on this disc is quite wondrous: simply the opening
phrase of the first track, ‘Luce serene e chiare’, captivates the
listener with its perfectly weighted trajectory. If anything, the tenderness
that La Venexiana bring to some of Gesualdo’s utterances perhaps lends
a certain detachment from the passionate texts. For instance, the second
madrigal, Tal’hor sano desio, ends with the words ‘eterno
duolo’ (eternal sorrow). The performing style here is careful rather
than deeply involved: it is as if the ensemble were observing the
poet’s anguish from a distance, commenting sympathetically, rather than
embodying the poetic voice.

Ultimately, though, the trade-off between poetic involvement and musical
virtuosity is one worth making when the level of vocal skill is as high as
this. The extreme harmonic juxtapositions of madrigals such as Ecco, morirÚ
dunque are handled not just with rhetorical aplomb but with control of tuning
so adept that these pieces come across as more mellifluous than one had ever
supposed. Perhaps, indeed, if he had known that La Venexiana would smoothe
the edges of his madrigals so effectively, Gesualdo might have written yet
harsher dissonances. 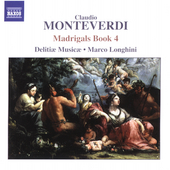 A contrasting approach is taken by the Italian ensemble DelitiÊ MusicÊ,
directed by Marco Longhini. This group appears to be working its way through
the entirety of Monteverdi’s madrigalian output on the Naxos label,
having released the first three books prior to the appearance of this disc
(Claudio Monteverdi Madrigals Book 4: Naxos 8.555310). The group
claims to be ‘dedicated to plausible reconstructions of a cappella
music of the Italian Renaissance’, ‘plausible’ being the
operative word. The ensemble here consists of a flexible combination of six
singers, five of whom are used in any one piece; half of the tracks are
accompanied by theorbo, harpsichord, or both. Among the singers, the two
countertenors and the bass are ever-present, with two tenors and a baritone
sharing the middle parts according to cleffing and range. It is noted on the
back of the jewel case that the use of exclusively adult male voices reflects
recent research into seventeenth-century performance practice. It does,
however, bring some performance problems of its own: individual madrigals can
range as widely as twenty-four notes (three octaves plus a minor third), and
the book as a whole frequently employs the extremities of these ranges. It is
rather difficult to find a suitable pitch even for a mixed choir to cover
such a wide span, and with countertenors on the top lines, the only way to
achieve it is to have a bass who can extend well below the stave with comfort
– happily Walter Testolin on the present recording fulfils this
requirement with apparent ease – and to require the countertenors to
sing higher than they, or the listener, might wish. In the original
performance circumstances, Monteverdi had castrati available to him, and in
their absence today, a more pleasant effect is achieved by the use of female
voices on the higher lines of this music, as is the case with La Venexiana,
than countertenors are able to create. The availability to a mixed ensemble
of a higher performing pitch than employed on the present recording is also
an advantage, as the excessive muddiness of passages such as ‘I vivi
ardori miei’ in the fourth madrigal, ‘Sfogava con le
stelle’, can then be avoided.

As to the performing style of DelitiÊ MusicÊ: the extent to which the
madrigals are subjected to variations in tempo is well beyond anything that
could be called tempo rubato, and at times leads the listener to suppose that
the piece has actually ended prematurely (an instance being the cadence
before the repeated last phrase of ‘Ah, dolente partita’). The
rhetoric of the poetry is depicted on a large scale, as if the madrigals were
being projected into a stadium rather than through one’s living room
speakers. At times the effect achieved by these huge rhetorical devices is
extremely powerful: such moments are particularly noticeable in the earlier
parts of ‘Sfogava con le stelle’, for example. However, often the
degree of manipulation applied to the musical text – in terms of tempo,
extreme dynamics and indeed extreme vocal range – overshadows the
composer’s contribution: although DelitiÊ MusicÊ’s ideas are
often interesting, I would prefer to view Monteverdi’s madrigals
through a less highly-coloured lens.