He might also have added that it was an opera that
suited this particular city so very well: a web of drama and danger, political
ambivalence and lack of moral centre. The baddies come out on top; the goodies, if they
exist at all, fade into the sunset.

Los Angeles has become synonymous with downtown decay, the inhumanity of its suburban
landscapes and an artistic immorality crystallized over decades by the Hollywood film
machine. Today, as the city fights its own traditions to restore and renew what used to
be good and worthwhile, the formerly conservative LA Opera has been making its own
statement of change by allowing and encouraging productions that challenge audiences to
leave their comfort zone. ìPoppeaî was an inspired choice, and although originally
envisaged as a new production, it became necessary to import Pierre Audiís celebrated
staging for Netherlands Opera. To sell this to their less adventurous patrons LA Opera
engaged world-class performers like Susan Graham (Poppea), Kurt Streit (Nerone), David
Daniels (Ottone), Frederica von Stade (Ottavia) and got Harry Bicket to lead a
thirteen-strong period band, complete with theorbos, lirone, and baroque cello, from the
harpsichord. For many in the audience on first night, this was a revelation indeed: to
be able to hear a vocal line with absolute clarity, where the words were everything, the
music supporting rather than over-whelming.

In the early 1640ís, as opera was moving from the ducal palaces to public theatres,
Monteverdi emphasised plot, drama and virtuoso vocal writing, leaving the gods and
mythological creatures behind and concentrating on real human beings for the first time.
With ìPoppeaî, opera entered a new age. Today, his problematic drama still causes an
audience to stop and think: can these two rather awful people really win it all – and
deserve that happy ending and sublime duet? Of course Monteverdiís audience knew as well
as we do (and probably better in many cases) what was to come later in the story of Nero
and Poppea – the vicious violence, the bloody nadir of a tyrantís rule. They knew that
this was a snapshot in time, and that Virtue didnít always conquer, that Fortune and
Love were powers as fickle as dice.

These last three characters, opening the proceedings to set the stage and give warning of
what is to come, were well sung by young singers Stacey Tappan, Tonna Miller and Hanan
Alattar respectively, although the latter sounded least convincing stylistically.
Throughout the opera the minor roles were mixed and matched between some very promising
young artists with not a single voice sounding ill-tuned, nor a character looking
under-rehearsed. Outstanding among them were tenor Nicholas Phan (Lucano/soldier/friend)
and Keith Jameson, another young tenor, singing the role of page Valetto. Jill Groves
gave an outstanding performance as Ottaviaís ancient Nutrice.

The roles of philosopher/poet Seneca and Drusilla, hopefully in love with Ottone, were
taken by Reinhard Hagen, bass, and Christine Brandes, soprano. Hagen possesses a deep,
warm bass that reverberated convincingly around the theatre, giving substance to a
character that Monteverdi suggests is essentially morally weak, and even pretentious in
his stoicism. Brandes is a baroque singer with world-class credentials and she made the
most of the slightly put-upon character of Drusilla, making every word count with a pure
soprano that sounded completely at ease in the idiom. Veteran performer Frederica von
Stage might not be known for her Handel or Monteverdi, but she showed her immense
versatility with a finely-drawn portrayal of Ottavia, vengeful spurned wife of Nerone.
The voice might not be what it was in terms of sheer vocal beauty, but it still had
power and a fine dramatic sense.

Singing the traditionally ìtravestiî role of Arnalta, Poppeaís foolish old nurse, British
tenor Chris Gillett was a great success with the local audience, as he played the part
with a fine balance between farce and pathos. This opera is full of wonderful comic
moments, vignettes and asides, that lighten the overall gravity of what is going on
ìmain stageî – and the ridiculous old snob is a major source of that light relief.

But the centre of this opera lies in a triangle of love, ambition and power, represented
by Ottone, Poppea and Nerone himself. With David Daniels singing his first (and not
last, we hope) Ottone, the audience was treated to a real baroque specialist at work.
His exquisitely beautiful instrument is perfectly suited to the melismas and tonal
contrasts of the work, not to mention the idiomatic musical style of the period –
something not always quite so well accomplished by others. If the part doesnít allow him
to soar to where his voice really blooms, it certainly displays his other vocal and
dramatic talents at their eloquent best. One of Audiís adjustments this time around was
to allow Daniels to extend the character from the rather one-dimensional and droopy
ìspurned loverî into something much edgier, much more scheming. One had only to watch
Ottoneís eyes, whilst assuring Drusilla of his suspiciously new ìloveî for her, to know
that she was being cruelly misled.

Ambition, impure and simple, is what the character of Poppea is all about and if
Monteverdi had any sympathy for her, it doesnít show. But there is a kind of awful
magnificence about so driven a soul, so determined a woman in the manís world that was
ancient Rome, and mezzo-soprano Susan Graham was in many ways the perfect embodiment of
those arguable virtues. Her pinpoint intonation, and expressive and assured control of
dynamics ensured that she dominated scenes where Poppea set out her stall to become the
most powerful woman in the land; there were also gorgeous pianissimo notes reflecting
her occasional inner self-doubts. If there was any doubt in Neroneís mind, it could only
have been ìwhenî not ìifî he would gain Poppea as his empress. Kurt Streit is an
immensely accomplished dramatic singer and he engaged all his abilities in this
portrayal of the despotic emperor who uses absolute power with complete disregard for
consequence. If his rich tenor seemed sometimes stretched beyond comfort, it was never
to the extent of pain for either singer or audience. He too was able on premiËre night
to display some beautiful high soft notes that almost convinced us of his characterís
ability to love. Baroque aficionados might argue about the decision to transpose the
role of Nerone down from the high alto/male soprano range, as it certainly changes the
musical balance between him and Poppea and Seneca, losing those delicious dissonances
and ìcrunchesî in the big duets. However, now that Daniels no longer sings Nerone, there
are precious few male singers able to cope with the tessitura of this role at the
original pitch – and fewer still with a name big enough to fill the Dorothy Chandler
Pavilion. Before long, would it be too much to ask for a big house to use both Daniels
as Ottone and perhaps young Michael Maniaci as Nerone? The one thing that the two
principal singers could not offer in this production of ìPoppeaî was youth – and we
therefore lost an essential element in the story, that of youthful arrogance and
bravura. This Nerone was unpleasant, but he wasnít the brattish young killer of history.
This Poppea was beautiful and scheming, but she wasnít the teenage temptress, nurse in
tow, for whom Monteverdi wrote his melodious lines. This is where financial reality, in
the form of box office receipts, meets artistic vision – a modern dilemma that the
composer would have recognised full well even in the 1640ís.

One cannot leave this production without mentioning the superb costumes, for they were in
fact the major scenic vehicles of story and character progression that gave focus and
colour within Audiís stark metallic sets. 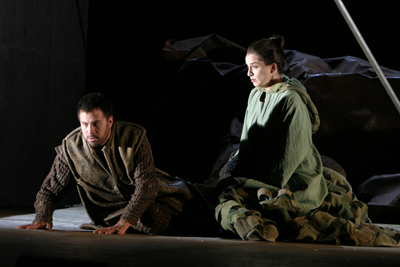 The renowned Japanese designer Emi Wada recreated many of the costumes for LA Opera, as the originals were too complex to re-size and each was a masterpiece in textural and expressive design. Both colour and complexity of materials are used to mark the moral and social rise and fall of the characters – for instance Poppea starts out in almost virginal cream and progresses through richer red and gold until she matches Nerone in imperial magnificence for her coronation. Much like Monteverdiís great gift to modern opera as we know it today, Wadaís costumes are not time specific; they defy categorisation and remain as a work of art in themselves. In a city that is busy trying to re-invent itself, such timelessness shines out like a beacon of hope for the future.