Although opera buffs were sufficiently curious to sell out all five performances of the work
premiered by Minnesota Opera on February 10, they nonetheless found it difficult to imagine
John Steinbeck’s account of the exodus from the Oklahoma Dust Bowl as an opera.

The 1939 novel seemed too long, too complex and too freighted with despair for such
transformation. And doubts were enhanced by reports that identified Gordon with Broadway and
Sondheim.

Wasn’t this a task for a heavy-weight composer?

But during rehearsals of “GOW” at St. Paul’s Ordway Center for the Performing Arts, word got
around that Brian Leerhuber, Tom Joad in the huge cast, had called the new opera “Verdi on
steroids.”

And at the premiere that assessment was wondrously born out by Gordon’s amazing and unusual
score, for “GOW” — the composer’s first large-scale work — is of monumental dimensions.
With two intermissions it runs over 4 hours, and it calls for 13 principal singers, plus 50 featured
roles, several sung by one vocalist.

In three acts divided into 33 scenes, “GOW” is of epic sweep and of a mesmerizing grandeur that
makes the audience participants in the Joads’ flight from Oklahoma to California in the depth of
the Great Depression.

“GOW” is the product of a collective of gifted artists assembled by MO artistic director Dale
Johnson. Librettist Michael Korie has stripped down Steinbeck’s 600 pages to a lean and
singable text in verse that only occasionally rhymes and retains the speech patterns of the Okies.

Stage director and dramaturg Eric Simonson, a member of Chicago’s Steppenwolf Theatre for 20
years, has directed, adapted and acted in numerous plays, including Frank Galati’s stage version
of “Grapes of Wrath,” in which he played eight minor roles in the production seen both in
London and Chicago.

“I was in on the opera from the start,” says Simonson, who recalls “batting around ideas” with
Johnson back in 1996. And, working closely with Gordon and Korie, he was a “hands-on”
participant in “GOW” as a work in progress. 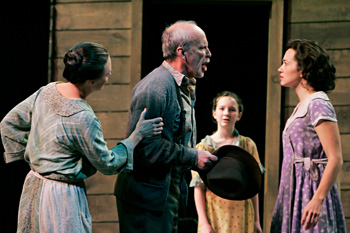 “Others had sought permission to make an opera of the novel from the Steinbeck estate,” he says,
“but we were the first to whom it was granted.”

“It was then a matter of whittling the book down to a manageable libretto. We decided to focus
on Tom Joad and his mother.”

“Once that decision was made, everything fell into place. Everything else was unessential.”

For the sets – a steel catwalk frames the stage – designer Allen Moyer sought inspiration in
Walker Evans’ photographic documentation of the Depression. Projections on the back wall of
the stage – sometimes black and white, sometimes motion picture excerpts – add to the dramatic
impact of the staging. 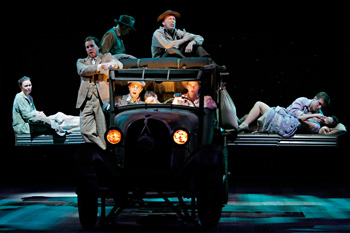 Costumes are the work of Kärin Kopischke; choreographer Doug Varone has added animation to
the action.

Early on the creative crew considered making “GOW” an American “Ring” running over several
evenings; the idea, however, was abandoned

And although there will be demands that the opera be “shrunk,” it is now the length that the story
demands.

The score – without recitative – is song based and many scenes flow easily into the next. Gordon
points to models in “Porgy and Bess,” “Street Scene,” “Showboat” and Sondheim, but he has
gone beyond them in a score that is original and completely his.

One recognizes, to be sure, art songs, musical comedy, jazz, traditional blues and other
references to the music of the time of the novel, but the composer has assimilated these
influences and washed over them with a style essentially contemporary.

“I want the opera to be a powerful evocation of Steinbeck’s story,” Gordon says in an essay
written for the premiere, “a story about great flat distances, wide open spaces, vast silences filled
with doubt, fear and hope, with pain and loss and ultimately with compassion and human
kindness.

“The wide-open spaces of Copland are in it — filtered through me.”

About the score Leerhuber says that Gordon “gives us lines to sing that soar and tunes that are
immediate in their expressive outpouring; it is emotionally gripping music that moves you.”

The mammoth cast is without a weak link. Leerhuber – happily free of references to Henry
Fonda’s 1940 movie portrayal, is a strong and sensitive Tom Joad, the son who hopes to help his
mother — mezzo Deanne Meek — hold the family together.

Tenor Roger Honeywell is lapsed preacher Jim Casy, and baritone Andrew Wilkowske is moving
as retarded son Noah, whose suicide by drowning is expanded from the novel to conclude Act
Two.

A gem of the score is baritone Robert Orth’s funereal “Little Dead Moses,” with which he angry
— but tenderly — sets Rosasharn’s still-born baby afloat on the river. 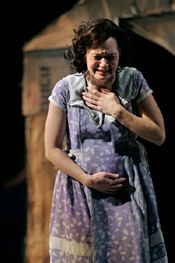 Yet it is Kelly Kaduce who tops her many colleagues as downtrodden adolescent Rosasharn
(Rose of Sharon). As in the novel — something beyond Hollywood in 1940 — she offers her
breast to a starving man and then sings the concluding “One Star,” which “like a candle in a dust
storm” will one day “fill the sky with silver sparkles.”

Thus — despite the darkness and overt tragedy of their story — Gordon and Korie lower the
curtain with hope.

“GOW,” in sum, is not about the Okies; it is the Okies, these “tumbleweeds on the road to
nowhere,” as Korie says, confronted head on. Their story is not told; it is lived out with
compelling immediacy before the eyes of the audience, who make the journey with them.

And this it is that places “GOW” in the company of Janáček and Shostakovich’s “Lady
Macbeth.”

Almost a century after Mahler’s quintessential score, Gordon and Korie have created a new —
and American — song of the earth.

Tom Joad sums it all up at the conclusion of Act Two:

“It’s the story of a disenfranchised people,” says Brian Leerhuber. “And Americans today are
struggling with very similar issues of physical and emotional displacement, trying to figure out
what the American dream is all about.”

“Grapes of Wrath,” a co-commission of Minnesota Opera and Utah Symphony & Opera, will be
on staged in Salt Lake City in May. It will be seen later at Pittsburgh Opera and Houston Grand
Opera. Tulsa Opera was considering the work to mark the centennial of Oklahoma statehood in
2007; however, the company’s board of directors, wishing to distance itself from the theme of
Okies and the Dust Bowl, vetoed the idea.

Footnote: Since apocalyptic thinking is vogue in certain circles today, it is recalled that
Steinbeck’s title comes from the Book of Revelations, Chapter 14, where
— in anticipation of the
Apocalypse — the grapes in question are pressed.