The first night of this revival, directed by Ian Rutherford, did the late director proud. Following a
triumph in the role on Glyndebourne’s 2005 tour, Peter Auty’s Rodolfo was physically and
vocally full of youthful ardour, while as Mimì, Mary Plazas combined the looks of a china doll
with the vocal warmth and personality of a flesh-and-blood young woman. 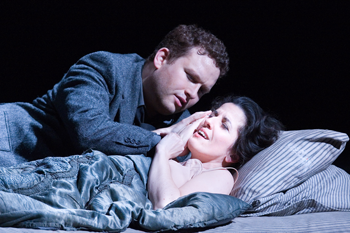 Mark Stone’s
Marcello was masculine and glamorous, with every word projected clearly; there was real
passion in the ‘big moment’ when he takes up the melody in Musetta’s aria. Giselle Allen’s
portrayal of Musetta was quite remarkable, a young woman full of promise brought to her knees
by miserable poverty, and the exceptional bass Matthew Rose made much of his role as Colline,
creating a moment of stillness and awe with his Act 4 aria.

Musically the performance was not entirely successful. Conductor Xian Zhang had a mixed
evening with tempi which were at times so measured that they almost ground to a halt, but
seemed to have a particular affinity with Plazas in her arias, and as the tragedy reached its
conclusion, grew in expressive breadth. A balance problem between pit and stage in the first act
caused whole passages of solo singing to become inaudible, but this was seemingly addressed in
due course as the issue was no longer apparent after the interval.

However on stage there was diligent attention to detail; a piece of luxury casting found Robert
Poulton singing the dual roles of Benoit and Alcindoro, which he contrasted with two very
different styles of seediness. The crowded stage of Act 2 felt like a genuine public gathering,
with a particularly convincing children’s chorus; the simultaneous duets of Act 3 were
well-defined and audible alongside one another. A few minor anomalies in the production’s
updating to the mid-20th century can be forgiven in the overall scheme of a staging which
continues to feel immediate and ‘real’. 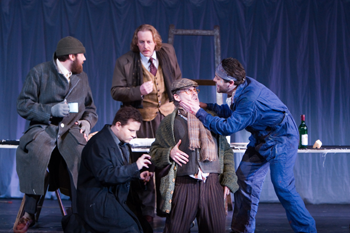 One would hope – and expect – that Pimlott would have been well pleased with this touching and
credible realisation of his enduringly popular production.