Those years have long since past, though Peter
Gelb has managed to revive much interest with the innovation of the relays to movie theaters.
Each of the three DVDs of concern here feels like “event” television: a rare Verdi opera featuring
three of the Met’s biggest stars of the time (Scotto, Domingo, and Milnes in Luisa Miller); a new
Zefferelli Tosca; and Birgit Nilsson’s return, in a full staging of Elektra, after years of absence
from Lincoln Center. 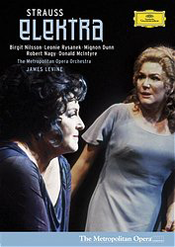 Ranging from January 1979 for the Verdi to March 1985 for the Puccini, all three DVDs show
the Met at its traditional best, with elaborate sets often greeted by audience applause, charismatic
stars, and the highly professional support of the Met orchestra (under James Levine for the Verdi
and Strauss, with Giuseppe Sinopoli leading Tosca). The DVDs boast bonus features that
actually supplement the viewing experience. The Verdi and Puccini have photo galleries that
present fascinating information on each opera’s performance history, as well as interview
segments apparently seen at intermission time during the broadcasts. No great insights are
produced in these talks, but there’s always a fascination in seeing the performers in street clothes,
so very different from the characters they have just been seen as. The Tosca also features a 20-minute walking tour of Rome with Zefferelli and a note-taking assistant (yes, a comely young
man). The three locales of Tosca’s action are viewed, and Zefferelli occasionally says something
of real interest. Ostensibly he wanted his Scarpia to be dangerously attractive to Floria — in the
event, Cornell MacNeil is not able to pull this off. But the psychology behind Zefferelli’s insight
remains viable. He also offers what amounts to almost his entire artistic philosophy: “Opera is
essential! Opera cannot be sophisticated.”

Ultimately the performance counts above all else. Purely as singing, the Luisa Miller has the
greatest success of the three. Renata Scotto triumphs as Verdi’s Luisa, a heroine whose trajectory
of happiness to misery parallels Violetta’s, though without the depth and social impact of
Traviata. Domingo is Domingo, singing handsomely and furrowing his brow with maximum
exertion. Sherill Milnes manages the tricky feat of keeping Miller an appealing father figure as
his character becomes a pawn to the tangled plot’s manipulations. As Wurm, James Morris
reveals the talent that would soon move him into larger roles. 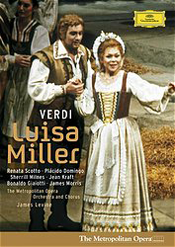 The booklet essay focuses on Scotto; that’s understandable but preferable would be some
comment on why the set, so traditional as to be almost laughable in its faux-Swiss kitsch,
apparently features fake balcony boxes at the sides, populated with well-dressed supers. That
touch of “regie-theater” makes no sense here. And neither does Domingo’s blond wig.

The Elektra disc serves as a tribute to Birgit Nilsson at the Met. The bonus features include her
touching paean to Levine at his 25th anniversary gala, and her contributions to the centennial
gala. Most fascinating is almost 20 minutes of backstage footage during the curtain calls for the
Elektra. Cutting back and forth between the ecstatic reception out front and the genial
camaraderie in the cramped area between curtain and set, this footage makes fascinating viewing,
even if just to hear Birgit announce “I need a drink.”

While praising the performance, booklet essay writer J. F. Mastroianni acknowledges it “may not
be flawless,” noting the “occasional pitch concern.” For your reviewer, Elektra’s opening
monologue is pretty much a lost cause, and though Nilsson gradually finds a way to stabilize her
vocal production, it is sheer charismatic energy that pulls her through. For acting she doesn’t do
much more than raise her fists to heaven, but the fierceness of her spirit still comes through. And
when Nilsson tussles with Leonie Rysanek’s Chrysothemis, the hallowed images of Bette Davis
and Joan Crawford come to mind. In securer voice than those two leads, Mignon Dunn’s
Klytämenstra and Donald McIntyre’s Orest still find themselves in the shadow of Nilsson and
Rysanek’s dramatic conviction.

For the Met, Herbert Graf’s production (with sets and costumes by Rudolf Heinrich) appears
almost modern, with its abstract, timeless space and minimal use of props. Levine’s reading of
the score maintains a firm grasp of its rigor while embracing the very few moments of lyricism.
As described above, Zefferelli’s Tosca, new for this 1985 filming, favors huge spaces,
elaborately detailed, as well as the frequent use of extras, most of whom have some distracting
bit of business. The best example here comes in act three, when two handsome hunks cross the
stage, one with shirt wide-open to expose a gym-generated chest. They are carrying cleaning
equipment, as if they are janitorial staff, and one lays down to enjoy the shepherd’s song, after
which they both saunter off-stage. The auditions for these two roles must have been extensive
and exhausting.

Tosca gets performed so often, at least in the USA, because the tight construction and supremely
dramatic score almost guarantee a satisfied audience, even if the singing doesn’t compete with
the best performances. Such is the case here. The great Cornell MacNeil is caught late, and
though he knows the role and provides a worthy reading, the voice is rough-edged where
Scarpia’s calls for oily smoothness. As contrast, Domingo is in fine voice and uses his manly
persona well enough. What essential difference there is between his Cavaradossi and his Rodolfo
mentioned above eludes your reviewer.

Hildegard Behrens was enjoying the prime of her career, and few dramatic sopranos will pass up
a chance at Floria Tosca. As acting, Behrens does probably as good a job as anyone. The voice is
simply not rich enough to provide the lyricism that Tosca relishes as much as she does hysteria.
Only in Tosca’s final tragic declaration, “Avanti a dio!” does Behrens find a line that requires the
edgy power she brought to Wagner. But she barks out some truly scary cries of “mori!” as
Scarpia kicks the bucket.

While Italo Tajo’s Sacristan is hammy, Anthony Laciura gives a classically unctuous Spoletta.
Sinopoli rushes at times but his energy brings a needed sense of risk to the evening.

As time passes a gentle coat of dust seems to be falling over much of the Metropolitan’s filmed
heritage, but then again, what seems so fresh and exciting in today’s productions will have to
face the test of time as well. For those eager to a trip back to Reagan-era opera, Met style, any or
all of these three DVDs are just the thing.