The Wiener Volksoper’s 2007 production of Die Zauberflöte is rich with visual
effects, including a large mechanical dragon that emerges from the depths of the stage, a vibrant
rotating set complete with “living” statues who are elevated high above the stage; a gargantuan
telescope and fire set the scene for what was unfortunately a mediocre production, other than a
few glimmering aspects.

The Overture was well-effected but somewhat mechanical and it lacked in the necessary colours
and shading that Mozart’s music demands. Conductor, Elisabeth Attl seemed to have little
influence over the orchestra that in some moments seemed to be just going through the motions.
The three ladies, sung by Edith Lienbacher, Sulie Girardi, and Andrea Bönig looked fabulous in
matching gowns and hats (and later clad in leather and tattoos) complete with walking canes,
however their singing was often strident and in what should be a unified harmonic ensemble
there were inconsistencies in unity.

Die Königin der Nacht (Queen of the Night) was eloquently sung by Miriam Ryen, who had a
brilliant and laser-like upper tessitura and beautiful agility in her coloratura passages, however
the orchestra often overpowered her and thus obscured her musicality. Her Der Hölle Rache
kocht in meinem Herzen was visually exciting with an electric red sky from which hung an
enormous crescent moon. Some intonation problems affected her performance of this aria, that
also lacked the tremendous rage that Mozart expected here.

Papageno was performed by Mathias Hausmann who possesses a lovely burnished baritone to
match his consummate dramatic abilities. His Der Volgelfänger bin ich ja was not only amusing,
but sung with much inflection and attention to detail. Unfortunately, the following entrance by
Daniel Behle, as Tamino, left much to be desired. His Dies Bildinis ist bezanbernd schön lacked
the brilliant sound that the aria requires and his acting was somewhat superficial throughout the
opera. One wondered if he was really in love with Pamina or not.

Pamina’s entrance was visually wonderful, as she was dragged in by Monostatos (played by
Wolfgang Gratschmaier) in a large net. American Soprano, Jennifer O’Loughlin’s Pamina was
artistically beyond the rest of her cast. She effected every entrance with lovely spinning tones in
a deep golden hue in her middle voice, and her musicality was well-suited to the lyricism Mozart
demanded of a superb Pamina. The orchestra, however, was highly insensitive to Ms.
O’Loughlin’s middle and lower registers and failed to match her musical nuances. A sensitive
and believable actress, her Ach, ich Fühl’s es ist verschwunden was luscious and effected with
impeccable diction, and well-floated pianissimi that give credit to her vocal technique.

Lars Woldt, in the role of the Sprecher, possessed a strong and well-projected voice, and his
presence added to the overall dramatic impetus of the production. In addition, Kaiser Nkosi’s
Sarastro opened Act II with strong dramatic and vocal qualities. His middle register was a lovely
purple hue, however he lacked resonance in his lower tessitura, an unfortunate detail that affected
the strength of Sarastro’s character. 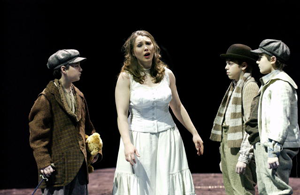 Some of the most comical moments to which the audience responded belonged to Papageno and
Papagena (comedically played alla Lucille Ball by Renée Schüttengruber). Complete with hot
pink wig, and the whiniest fabricated voice, Papagena stole Papageno’s heart, and the audience’s
as well. If anything stood out in this production it was the musicality and unity of the “Three
Boys” who were played by the Wiener Sängerknaben. Mozart’s opera is imbued with many
numerical elements in groups of three and these trios (the three spirits, the three ladies, and three
priests in the temple) should be unified textually and harmonically. The three boys were perhaps
the most precise musically and kudos go out to them for stealing the show. Although a visually
interesting production, the orchestra often marred the musicality of the singers, and most
bothersome was how members of the orchestra got up and left the pit during the opera and then
returned to later, not only disturbing the dramatic action but also creating a general lack of
continuity in the musical fabric.