For
the cognoscenti, a much anticipated experience, since the production was about the alternative
version staged, under Rossini’s direct control, in the local Teatro Eretenio just three months after
the world premiere in nearby Venice on May 22, 1813. Various period observers, including the
French novelist Stendhal, witness to the craze sparked by Rossini’s oriental fantasy, resulting in
many revivals during the mid-late 1810s. Extramusical circumstances may have played a role,
too. 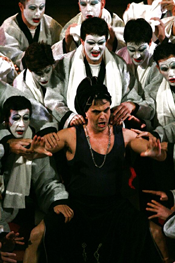 “Between 1530 and 1780 there were almost certainly a million and quite possibly as many as a
million and a quarter white, European Christians enslaved by the Muslims of the Barbary Coast”
[which extends from Morocco through modern Libya], reckons Prof. Robert C. Davis. Only in
Algiers there were six “bagnos” (baths) hosting the human prey caught by Barbary pirates during
their raids in the Mediterranean, and even as late in 1830, when the French took over Algiers,
there were still 120 white slaves in the bagno.

Such historical background may qualify L’Italiana in Algeri, loosely based on a real-life incident
involving a lady from Milan, as a conspicuous act of escapism from all-too-present horrors,
while to modern audiences the shadow of the impalement stake, repeatedly waved in front (well,
somewhere else) of poor Taddeo, only amounts to a bawdy phallic gimmick. Stage directors
rarely miss the chance, and Damiano Michieletto was no exception this time. Besides red tables
and modular cubic frames — variously recombined to conjure up Mustafa’s palace, gardens, a
ship etc. — black wooden poles sprouted everywhere. (True, the imposing presence of Palladio’s
three-dimensional sets is a hindrance to any stage designer, thus making minimalism an
unavoidable choice at the Olimpico). 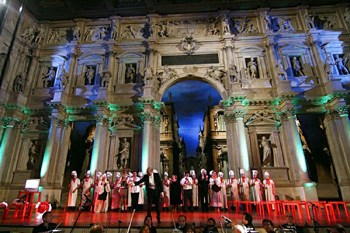 On the other hand, the acid lighting, the ghoul-like makeup of the eunuchs’ choir, Haly’s fiendish
looks and Mustafa’s rabid behavior conveyed a disquieting atmosphere far from the stock
reading of Rossini’s buffo masterpiece. Only in the finale, with the fugitive Italian slaves
disguised as pizza cooks and green-white-red colors flying around in a reassuring happy end,
some tribute to commonplace was paid. If mildly modernistic and apparently low-budget, the
stage department thus contributed to boost the remarkable musical performance led by Giovanni
Battista Rigon with relentless pulse and unfailing tempo choices. The Orchestra Filarmonia
Veneta “G. F. Malipiero” sounded historically informed in its string section; so did the crisp
woodwinds led by virtuoso oboist and deputy conductor Stefano Romani. Brasses and
percussions (including a rarely-heard chapeau chinois or jingling-Johnny for Janissary local
color) added a brazen touch in the tutti passages, particularly in the finales.

In the singing company, the up-and-coming Albanian mezzo Enkelejda Shkosa (Isabella)
displayed buffo stamina alongside impressive coloratura, though her recent weight gain hardly
contributed to the seductive requirements stipulated by her role. Despite a cold start, Lorenzo
Regazzo was a mercurial and domineering Mustafà throughout. If only he could restrain from
cheap effects in the style of third-rate German Kabarett, leading him to unnecessarily tampering
with the pitch. Both Andrea Zaupa, a young and debonair Taddeo, and Chiara Fracasso as Zulma
deserved unconditional praise for their beautiful instruments, mature vocal technique and acting
skills. The same would apply to Luca dell’Amico’s Haly, were it not for a few campish poses
imposed on him by costume designer Manuel Pedretti. Anna Laura Martorana (Elvira) and
Nicola Amodio (Lindoro) took perhaps too many risks with belcanto passagework, but — given
their young age — they may have the potential for further growth.

The main variants in the score involved Isabella’s role. Her substitute cavatina “Cimentando i
venti e l’onde” is studded with exciting virtuoso intricacies right from the start, yet sounds less
effective if compared to the soaring profile of the usual “Cruda sorte”, where the coloratura
batteries are being gradually uncovered after a row of fiery quasi-spoken ejaculations.
Interestingly, both alternative versions were written for the same singer: the Florentine alto (and
Rossini’s mistress) Marietta Marcolini, then in her early thirties. In the aria “Per lui che adoro”,
the core difference was about the accompanying solo instrument — a cello instead of a flute, the
latter being introduced only after 1815. Actually, the lower texture seems to work better: it’s as
much warm, pensive and sexually teasing as the plot requires.