Since its somewhat underwhelming reception at the premiere, Puccini’s La BohËme has become an opera that audiences love with an undying appetite, so the appearance of three DVDs in a matter of a few months comes as no surprise.
In March 2006 the Teatro Real, Madrid staged an expensive, “cinematic”-influenced La BohËme from Giancarlo del Monaco. Philippe Sireuil’s contemporary staging for Zurich was caught on camera in July 2005. Finally, a 1989 Canadian Opera Company performance, completely traditional, has found its way to DVD. Unfortunately, none of the three makes a strong case for itself as a DVD La BohËme to cherish. Not to worry – another DVD, or more, surely wait around the corner.
In Madrid director del Monaco, with set and costume designer Michael Scott, has tried to achieve almost contradictory ends – to have both a realistic depiction of the lower economic stratum of the bohemians, and an intricately detailed, eye-dazzling display of stage-craft. Rodolfo and Marcello’s garret is suitably dark and depressing, but it could accommodate the crowd scene outside cafe Momus, with its wide-open space and even a loft as big as the garret is some other productions. The scene change from act one and act two is handled magically, with a street set almost seeming to materialize before our eyes (the camera selection and editing here are part of the trickery). Del Monaco likes the effect so much that he repeats it at the end, having Rodolfo leave Mimi’s death bed to totter off and suddenly appear on the abandoned streets of the city. All this, of course, calls more attention to the stagecraft than to the story and the characters. This is not just a matter of sets or props. During Rodolfo’s act one aria, del Monaco has Rodolfo take Mimi’s hand and peck at the keys of his typewriter, which makes for a noisy and irritating percussion effect during a tender moment. The romance gets lost in the details.
Jesus Lopez-Cobos leads the fine orchestra in a reading that slows into ponderousness too often. Of a talented and hard-working cast, only Inva Mula as Mimi is able to deliver a performance that cuts through the fussiness. The role suits her voice well, and with her at its center act three becomes the best part of the performance. Mula’s Mimi is both tender yet knowing, fragile yet brave. Aquiles Machado as Rodolfo just does not have the same depth, with his physique denying him any romantic appeal. A cute, teddy-bearish Rodolfo can work, but Machado’s singing, while quite able, lacks the lyric charm to make him truly successful. As the parallel couple, neither Fabio Maria Capitanucci (Marcello) nor Laura Giordano (Musetta) have much special to offer. David MenËndez and Felipe Bou as, respectively, Schaunard and Colline practically get lost in the wallpaper. But then Bou has the worst moment of the production, having to sing his entrance lines as he runs behind a curtain, drops his trousers, and relieves himself, to the nose-wrinkling displeasure of his friends. 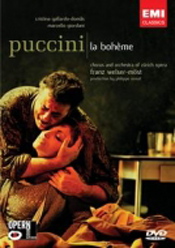 Don’t care for that idea? Well, then, prepare oneself for the amazing coincidence that a similar scene occurs in the Zurich DVD, only there it occurs in act four as the Schaunard, with his pants around his ankles, grabs a bucket and some newspaper. With that unfortunate coincidence aside, the Zurich DVD outclasses the Madrid one, even if ultimately it can’t be called a complete success.
Vincent Lemaire’s clean, spare set, modified simply for each act, suggests a modern-day setting but the time is unclear. Mimi still has her candle, of course, as the libretto makes that indispensable. The lighting (by Hans-Rudolf Kunz) has the faint blue-silver glow of fluorescence. Jorge Jara’s costumes manage to look like the sort of stylish “vintage” clothing bohemians (or hipsters?) of today would sport. The change from the garret to Cafe Momus is done simply by dropping the rear wall of the set and having a few well-chosen props carted on my supers. As Puccini’s music sets the mood quite well, that’s fine. Act three, however, uses the same basic set, and more atmosphere is needed. The booklet essay refers to the act three set as a sort of mass transport waiting area – that escaped your reviewer’s notice, especially as the stove-pot of the garret is present all the way through. The final stage effect, of the back wall dropping away at Mimi’s death to reveal a field of sunflowers, distracts more than it illuminates.
Not exactly a conductor of warmth, Franz-Welser Mˆst is efficient in the sentimental sections and bracingly energetic when called for, and the Zurich Opera orchestra plays brilliantly for him. Marcello Giordani is a little mature for Rodolfo, and his voice now tends to spinto forcefulness, but he manages to make that work for him as evidence of Rodolfo’s passion. Still, better to have avoided the high option as he and Mimi exit at the end of act one. Cristina Gallardo-Dom‚s acts a beautiful Mimi – warm, womanly, and sad. Vocally, she sounds surprisingly worn at times, and one can’t always ascribe that to the characterization of an ill young woman. Michael Volle’s Marcello has a darker edge, really angry at his Musetta at times, and not paying much attention to Mimi at the start of act three. Interesting, but not so appealing. Elena Mo?uc’s hearty, busty Musetta deserves better. Cheyne Davidson’s Schaunard and L·szlÛ Polg·r’s Colline come across as more odd than goofy. Somehow, despite these reservations, the singers all come together to create a more touching group of Bohemians than the Madrid cast can. 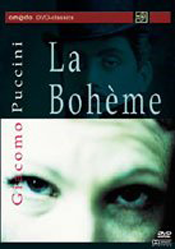 The 1989 Canadian Opera cast, with only one well-known name, work within a cramped set (for every scene, not just the garret) and in fussy traditional costumes. Every moment, as directed by Brian Dickie, seems to come from a frayed playbook titled “This Is How to Play ‘BohËme.'” Within this conventional framework, everyone does well enough to please the undiscriminating. Unsurprisingly, it is a fresh Hei-Kyung Hong as Mimi who gives this DVD its only real distinction. She is in marvelous voice, and easily as affecting as either Mula or Gallardo-Dom‚s. Her Rodolfo, Neil Wilson, looks more like the character than either Giordani or Machado, but his voice is undistinguished, and he looks tense whenever the vocal line rises. Gaetan Laperriere and Katherine Terrell play the other couple, with Kenneth Cox and John Avey as Schaunard and Colline, the perennial hangers-on.
The review copy had a slight but very irritating lag between audio and video, so mouth movements almost never corresponded to the actual singing. That flaw could be overlooked if the performance were more special, but as it isn’t…
If one were desperate for a new BohËme certainly on DVD, the recommendation here would be for the Zurich, with its more original setting and a consistently capable cast. Those who like opulent sets could go for the Madrid, and Inva Mula deserves respect for her efforts. The Canadian DVD would suit those best who love Ms. Hong. Or one could just wait for the BohËme on DVD – one should be appearing any minute now.
Chris Mullins