Donald Runnicles’ Opera Orchestra and Ian Robertson’s Opera Chorus give a
magnificent account of the music, which is among Wagner’s most sweeping and
bewitching. Runnicles and General Manager David Gockley have assembled an
outstanding cast for this, the first new production of Gockley’s 20-month-old
intendancy, and the cast delivered the goods, in an ensemble performance of
international stars, the like of which has not been heard in these parts for
some time.

However demanding and difficult the opera may be vocally and
instrumentally, this tale of the 13th century minstrel torn between Venus’
earthly, “sinful” and Elisabeth’s idealized, redemptive love is a
near-impossible bear when it comes to staging, especially in the 1861 Paris
version and its extended ballet scene.

On that point, Graham Vick’s overbusy, occasionally just plain silly
direction will be discussed (and derided) heatedly.
Attention-diverting production excesses, especially the primitive overuse of
awkward missionary positions, seem close to some of those under Gockley’s
predecessor, Pamela Rosenberg. 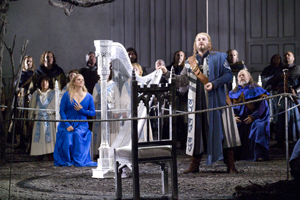 There is a wealth of greatness squeezed in the four-hour performance that unfortunately opens with a ballet thatís a mix of Pina Bausch, Greco-Roman wrestling, and a Groucho
Marx routine, and ends with little boys emerging from the stage floor as if
in a prairie dog hunting game.

But music, the essential component of the evening, triumphs over it all,
making the stage monkey business almost immaterial. Runnicles’ customarily
outstanding direction of Wagner holds true here, with rock-solid tempi,
balances, sterling support for the voices, and wonderful control of (the
many) climactic passages where he avoids “burping” the orchestra, presenting
powerful, convincing, steady high points instead.

The Opera Chorus, handicapped by Vick’s requirement to wave arms, roll on
the floor, and act ecstatic or possessed at the most inappropriate moments,
gave a memorably solid, beautiful performance, holding back (for good or ill)
from blowing the walls down when it had the chance.

Peter Seiffert ó a large man and no actor ó was vocally sensational in the
title role, fulfilling the dual and conflicting requirements of heroic and
lyric tenor. His Rome Narrative was powerful, if rather dry. Warmth and
beauty, on the other hand, characterized Petra Maria Schnitzer’s Elisabeth;
vocally and dramatically, she gave a true star performance, especially in the
difficult third act, creating an affecting “female Parsifal,” waiting for him
in vain.

Mezzo Petra Lang was the bold Venus, singing well, but not quite at her
best. The young English baritone James Rutherford made a memorable San
Francisco debut as Wolfram, with a meaningful, moving Song to the Evening
Star. All the principals, except for Eric Halfvarson’s mighty Landgrave (and
fine horsemanship atop the white quarter horse Alloy), had their local debut
in this production.

Vocally, one of the most striking performances of the evening came from a
young singer in a three-minute role. Having been made to sit on stage
motionless for almost an hour, Adler Fellow Ji Young Yang sangthe Shepherd’s
aria with affecting brilliance, exhibiting both musical intelligence and
peerless communication of emotions. When she sang of the sun’s warmth (“da
strahlte warm die Sonnen”), you could feel the bright light, the nourishing
heat. An extraordinary talent.

Ron Howell’s choreography for Venusberg ó women in long, clinging white
shifts, men naked to the waist ó was angular, clinically (and unsuccessfully)
sexual, and altogether distracting from some of the most sensual music ever
written. The Opera’s program notes decried productions with “unfortunate (and
justly parodied) exaggerations… cheap eroticism and a kind of corybantic,
danced Kama Sutra” of the scene ó describing perfectly what took place in the
War Memorial. 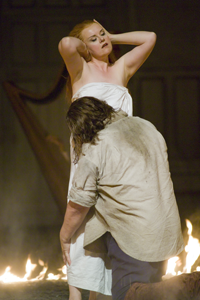 Stage directors have forever tried to “improve” on Elisabeth’s quiet,
offstage death as she is sacrificing her life for Tannhauser’s salvation
Vick’s direction on that point will cause much controversy, but in fact it
makes sense, while remaining true to the meaning of the text. In a kind of
assisted suicide, Wolfram reluctantly, gently, lovingly snaps Elisabeth’s
neck when she begs for death, and he goes on to sing to the Evening Star:
“Wie Todesahnung, Damm’rung deckt die Lande…” (“As a presentiment of death,
twilight covers the land”).

Paul Brown’s stage design uses a hangar-like unit set, with large windows,
all scenes enhanced by opulent costumes. Brown and Vick are provoking the
audience to shout “fire!” in a crowded theater by using up gallons of propane
that flares as a large circle on the ground, as branches of a tree, for long
periods.

But just how crowded was the theater? A startling fact from opening night,
something clearly indicating what a tough row Gockley must hoe to attract
audiences back to the War Memorial: in this once-Wagner mad town, on the
opening night of a major new Wagner production, the second balcony ó with its
affordable seats and best acoustic in the house ó was half empty. Wagner
fans, opera lovers: you don’t know what you’re missing.