All three of Monteverdiís great works ó LíOrfeo, Il ritorno
díUlisse in patria, and Líincoronazione di Poppea are being
given in this anniversary year of his ground-breaking leap forward for the
art-form, along with three more minor works later in the season. However,
this cycle can also be seen as a celebration of a rather more contemporary
master, albeit one synonymous with Netherlands Opera itself as well as with
the old masterís works, director Pierre Audi. What Audi does, particularly
with these very early works, is to achieve the near-impossible: he takes an
audience back to a time before time, to a place that might be no-place, but
which communicates to us through visual textures and stage architecture that
never confuses, always make sense. A set or prop may prompt an initial ìI
wonder whyÖ.î, but invariably the question is soon answered and we are
the wiser for it. He is a director who illuminates, rather than obscures. On
the downside, as he loves to use fire as exclamation points in his
productions, giving us three of his operas on successive nights did rather
devalue the currency: what, another explosion and burst into flaming torches?
But that would be to quibble with the scheduling, not the pieces themselves.
As would be to query the order of the weekendís offerings: why not in
chronological order rather than putting ìPoppeaî before ìUlisseî?
Some reasons suggest themselves, and the noticeably emptier house on the
final Sunday could be either cause or effect: ìUlisseî is certainly the
least accessible and immediately engaging of the trio where even Monteverdi
seems to struggle with the essentially static nature of the libretto.

All three of these productions are well known now around the world, and
have been available on DVD for some time. The local opera-goers have also had
several opportunities over the past 17 years to see them fine-tuned to their
present state, so can their re-emergence be justified? Certainly it makes
sense in this Monteverdi anniversary year, as weíve seen elsewhere on both
sides of the Atlantic, but productions of this quality have a second, even
more important role. Netherlands Opera has always prided itself on the
strength-in-depth of its ensemble singers and with these three pieces they
shrewdly mixed in many of their younger talent with visiting big names and
often gave them opportunities in more than one. 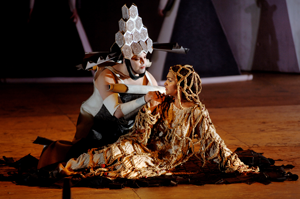 ìLíOrfeoî is quintessential Audi where all three natural
elements of earth, fire and water combine in sets of tangible solidity and
exceptional beauty. They were matched by singing of a similar calibre with
not a single disappointing voice on display ó standouts being the
experienced countertenor David Cordier as a ringing La Musica, Alan Ewingís
deeply expressive and mellifluous bass as Coronte and the two exciting
younger voices of Tania Kross (La Messagiera) and Anders J. Dahlin (Pastore
1, Eco/Spirito). Tenor Jeremy Ovenden was giving his debut performance in the
title role and if his vocal resources were occasionally tested by
ìPossente spirtoî, with some rough edges here and there, overall
it was a very satisfactory performance showing an expression and intelligence
that will surely develop further.

One very positive aspect of the scheduling of all three operas on
successive nights was the opportunity to contrast and compare several of the
younger singers in different roles. Dahlin shone again in ìPoppeaî, his
beautifully produced light lyric tenor floating serenely around the music of
the first Soldier and Lucano, whilst the bigger names of de Niese, Mehta and
Stotijn gave expressive and fully-rounded performances that didnít
disappoint. De Niese continues to extend her capacity to express the darker
emotions and passions and there was less shrillness in her top, more gentle
colour, than I have heard before from her. I doubt we have ever seen a more
seductive or believable Poppea. Malena Ernman, one of todayís more
versatile sopranos, seemed uncomfortable at times in the role of the
despicable Nerone, her statuesque Nordic beauty rather at odds with the
characterís requirements. She has a good range, although the gear-changes
sounded less than smooth on Saturday night and it took most of Act 1 for her
to settle vocally. By the final scenes she was entirely credible, even
disturbing, in her vocal and dramatic commitment. Bejun Mehta, as the
luckless Ottone, brought his usual assertive dark countertenor to the role
with admirable effect, if not much fine-tuning of expression. Christianne
Stotijn was deeply affecting as the wronged and vengeful Ottavia ó her
lovely chocolate tones could colour and caress the notes at will. Yet, it was
another young singer new to this writer that perhaps left the strongest
impression. The Chilean-born tenor Emiliano Gonzalez-Toro gave an outstanding
and very promising performance as the comic/pathetic governess Arnalta, his
final gorgeous lullaby to the sleeping Poppea a model of legato line and
sheer vocal beauty. Let us hope his talent is nurtured and guided in the
right direction.

All the singers were of course aided immensely by inhabiting Emi Wadaís
amazing costumes. These works of art ó no better term ó could carry the
opera on an empty stage and are rightly renowned. Textures that intrigue the
eye, materials that merge from shade to shade in the changing lights, fabrics
that shimmer and float. They evolve with the story, they almost become the
story. 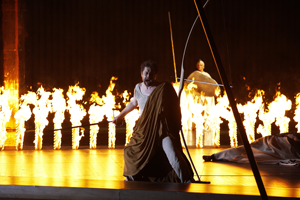 Such heights of visual and musical delight are hard to follow and that is
where the decision to place ìIl ritorno díUlisse in patriaî at
the end of the three works must be questioned. It is a much darker work, it
comes well before ìPoppeaî in terms of composition, and although
it has some lovely music, it is essentially much more static and almost
entirely given over to examinations of the protagonistsí psychological
states of mind whilst grappling with the whims of interfering deities. It
needs the best singers, and luckily it mostly had them ó in particular Paul
Nilon in the title role, as expressive and idiomatic as ever, and totally
convincing as the struggling hero. Here too, we had a chance to admire again
other singers from earlier on: Ewing, Agnew, Cordier and Kross. And in
particular the excellent Wilke te Brummelstroete as Minerva ó with a
searing soprano, crisply enunciated text and strong presence she lit up the
stage most effectively. Matching Nilon in emotional vocalism was Irish
mezzo-soprano Patricia Bardon as the grieving Queen Penelope, like the
Englishman an experienced baroque singer. Her dark and silky tones revealed
grief, anger and confusion with total surety. As so little happens
dramatically for most of the story, Audi keeps his ìbig gunsî for one
major coup de thÈ‚tre when our hero pulls the bow to convince his
queen who he is. Then, with a massive explosion of light, fire and thunderous
noise the house shakes and any guilty ìnappersî in the 15th row are
rudely awakened. Then, gently and almost apologetically, the opera winds down
again through the final, loving duet between husband and wife, back into
darkness and quiet.

One final aspect of this trio of Monteverdian genius must be mentioned ó
Netherlands Opera invited three separate period instrument bands in to
provide the music (although some players mixed and matched in at least two)
and it was interesting to compare the approaches of each director/conductor.
Stephen Stubbs and his Tragicomedia/Concerto Palatino took command of the
ìLíOrfeoî, Stubbs playing from both harpsichord and his best
known instrument, the theorbo (chittarone). His other harpsichordist was none
other than Christophe Rousset, making up the nine other continuo players.
They were supported at dramatic moments by another 16 players of brass, wind
and strings, including some outstanding playing of the difficult cornet by
Bruce Dickey and Doron David Sherwin. This band offered subtle and virtuosic
playing at the service of the drama. The next night it was Rousset in charge
of his own Talens Lyriques for ìPoppeaî, only 14 in number but
with a warm sound and obvious total familiarity with each other and the
piece. Now Stubbs withdrew to lute/theorbo/baroque guitar and was matched in
the continuo group by the likes of Erin Headley on viola da gamba and
StÈphane Fuget on harpsichord and organ. On the final night the even smaller
forces of Glen Wilsonís ìEsxatosî tried to hold the musical interest of
ìUlisseî but sadly failed to succeed entirely. Just eleven players was
perhaps a risk too far for this medium sized house, and it must be said that
although Wilson expended much energy and commitment to his singers from the
harpsichord, the total sound world was pinched and meagre in comparison to
the previous nights. Having said that, it is always a pleasure to see so many
young players in these period groups and like the less experienced singers on
the stage above them, they can only continue to stretch their skills with
these magnificent stagings of Monteverdi.