The theatre will always be full; the audience
will contain both opera aficionados who need something they haven’t seen a
million times before, and the newcomers who are the holy grail of the opera
house’s marketing strategy and who need to be given a reason to return to see
other operas in future. There are really two ways one can go ó either a
fairly traditional staging or an innovative reinterpretation ó but above
all, it’s important to achieve the near-impossible aim of being all things to
all people. The drama needs to be compelling, and preferably interesting
too.

It was common knowledge that film director Sally Potter, whose new
production opened English National Opera’s 2007/08 season, was to go down the
‘innovative reinterpretation’ route. As such, it was inevitable that this
most familiar of operas would be removed from its familiar setting in order
to rid it of its well-worn stereotypes.

So where was it set? Good question. The first act, with its music
full of sunshine and midday heat, was set in some dimly-lit wasteland
populated by security guards (in place of soldiers) and cheap whores (in
place of cigarette girls). Who were they to us? It was impossible to
recognise these people or to empathise with them ó and it was impossible to
follow the thread of the drama, as the decision to cut all dialogue reduced
the opera-comique structure to a song-and-dance show.

It became clear later on that we were probably supposed to be in Britain:
in the final act we headed for the customary Spanish bullring, with the
chorus as a horde of boorish British tourists (enabled by Christopher
Cowell’s very liberal translation). So why, for the first three acts, were
none of the characters recognisable to a British audience ó and what on
earth was a star Spanish toreador (David Kempster) doing in a bar in an
English back street? Surely the coincidental appearance of a key character in
an entirely unlikely situation is one of the most enduring of operatic
clichÈs, and therefore anathema to Potter’s concept (it didn’t appear to be
intentionally ironic). The third act of course took place at an airport, the
home of the present-day smuggler; you can imagine why three girls might have
a go at fortune-telling to pass the time, but not why one of their number
might take it quite so seriously. 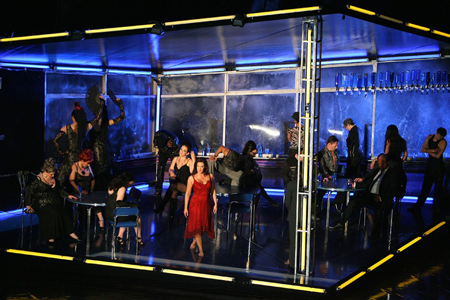 There were some striking moments – tellingly, they were those where the
singers were left to sing, as if in concert, against an almost plain
backdrop. Micaela and JosÈ’s duet benefitted from this; so did Micaela’s
aria, lustrously sung by the young American soprano Katie van Kooten in her
company debut. The final scene was quite riveting, with JosÈ maniacally
terrifying and Carmen an emotional wreck.

Fortunately there was also plenty of energy in the music. ENO’s new Music
Director, Edward Gardner, conducted with poised tension and enjoyed the
climaxes, and there was a lot of fine singing, not least in the title role.
According to the press release and some of the advance publicity, Alice Coote
was recovering from a viral infection ó there was no announcement before
the performance, and she sounded on fair if not top form. The problem was
that she was seriously miscast. Although the veiled smokiness of her mezzo
brings something very alluring to the role, it’s not a voice equal to the
weight of the music and, more troublingly, her body language simply didn’t
match it. She moved awkwardly, and was not helped by her costumes ó for
most of the opera she was incongruously dressed like a traditional Carmen.
Opposite her, Julian Gavin was a blazingly passionate and believable Don
JosÈ once he got going, but David Kempster failed to bring the necessary
vocal suavity to Escamillo.

Ironically, the operatically-inexperienced Potter’s intention to escape
clichÈ resulted in a production in the manner of many of ENO’s productions
of the past few years (bearing a particularly strong resemblance to David
Freeman’s controversial Otello in 1998) punctuated by some Spanish flavour
supplied by unremarkably-choreographed tango dancing. Whatever the intention,
a disservice was done to the piece, and to opera buffs and newcomers alike.
Although the third and fourth acts worked reasonably well on their own terms,
it was Sally Potter’s Carmen, not Bizet’s.