Despite rumours to the contrary, English National Opera’s advertising material
claims that this 12th revival of Nicholas Hytner’s popular production of ‘
The Magic Flute’ will be the last. Though it’s arguably better to get rid
of a production in its prime rather than when it’s been done to death, it will be a
sad loss. The staging has been popular with all sectors of ENO’s audience, as a
result of its balance, clarity, wit and visual beauty. This staging more than any other has
given me continual pause for thought over the years, leading me to better understanding of the
piece.

The ‘ serious’ characters are well-rounded and balanced; after all, they
are all supposed to be in some way human. The Queen of the Night is drawn in particularly fine
detail; she believes that she’s acting for the good, or why would she afford Tamino
the protection of the flute and the guidance of the three boys? Heather Buck’s
threatening coloratura was like an explosion of simmering anger and frustration on top of a
soft, warm-hued centre, not an all-guns-blazing outpouring of evil. Sarastro, too, has
something to learn; as he gets to know Pamina better, he loses arrogance that he never knew he
had, and comes to respect a woman as an equal.

Andrew Kennedy was a noble Tamino with lovely tone, though his oddly distorted vowel sounds
are becoming increasingly irritating. Sarah-Jane Davies matched him well as Pamina, singing a
beautifully poised ‘Ach, ich f¸hls’ (‘Now I know that love can
vanish’). Brindley Sherratt’s Sarastro was perhaps a little weak on the
bottom notes, but gave an imposing, centred performance, and Matthew Rose is such a fine
Speaker that I long to hear him as Sarastro.

Roderick Williams was a congenial Papageno with considerable charm, delivering Jeremy
Sams’s English dialogue in an approximation of a Yorkshire accent. Talking of
accents, his disguised Papagena is conventionally played in this production as an elderly
Irish tea-lady, which proved a verbal challenge too great for the Swedish soprano Susannah
Andersson. Once she was out of ‘ character’ and into the duet, her diction
was perfect and she sang very sweetly. 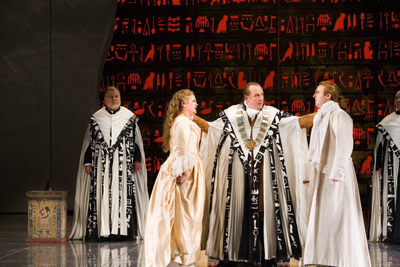 The chorus were on form and Martin AndrÈ conducted with delicacy and lyricism, but the
greatest joy of this production remains the staging. The live doves summoned by
Papageno’s pipes; the flood of green light when Tamino is wandering in the woodland;
the bears tamed by the flute; the majestic white pillars of the Temple of Wisdom and its
glorious interior golden screens with cut-out hieroglyphics; Papageno’s marital nest
full of baby birds. Given ENO’s tendency to replace serviceable and popular stagings
of core repertoire with misguided ‘concept’ productions, could they not
be persuaded to keep this lovely piece of musical theatre for a few seasons longer? I hope so.