The structure, inaugurated in the once-rich mining town in 1903, fronts on
a busy, narrow street. There is no square that allow a grand vista; indeed,
the Ju·rez is best approached obliquely from the Jardin Union, the long
rectangular square to its right with classically trimmed trees, wrought-iron
band shell and outdoor cafes, where strolling mariachi musicians play. Only
there can one pause and absorb the grandeur of the Romanesque facade with its
gentle broad stairs and Doric columns topped in bronze. Oneís eyes move up
to the eight, copper-cast Hellenic muses that top the portal.

ìEclecticî is the word encountered everywhere in descriptions of the
theaterís style. One enters a French lobby, for Parisí Garnier was in the
mind of Joseí Noriega, the original architect. By comparison, of course,
the Ju·rez is happily modest. There is no grand staircase after European
models, but a stairs on the right of the lobby that ascends directly into the
Green Room across from the first of four balconies.Opposite these stairs is
the smoking room with hints of Art nouveau in its stained glass and handsome
woodwork. Originally a retreat for men only, today it offers refreshments to
all ó and still tolerates smokers.

Up a small flight of stairs from the lobby, one enters the auditorium, a
showpiece of multi-colored splendor, where Moorish arches frame the
proscenium boxes. One looks up to the top of the horseshoe balconies to a
six-pointed crystal chandelier that sheds subdued radiance on the 850-seat
auditorium. The coming of Christianity to Constaniople is the subject of the
huge painting on the fan above the stage. In words this mix ó ìeclecticî
seems an understatement ó might suggest a Disneyland hedge-podge, but in the
Ju·rez it works ó and works magnificently. One can sort out the stylistic
components, but there is no temptation to do so. They flow easily into each
other to blend in an esthetically pleasing whole.

Enrique Carlos Greenwell Castillo, a Guanajuato-born architect
specializing in historic preservation, has been involved in the Juaírez
since 1953. Then 19, he helped paint interior walls to resemble the original
wall paper. ìThe theater is a document of Mexicoís history, and you
canít understand it without knowing that history,î Castillo said one
October morning in his studio in the heart of Guanajuato. ìNapoleon,
Emperor Maximilian II, Ju·rez ó they were all involved in events leading to
its construction.î

The 19th century was a turbulent time in Mexico, when ó as Castillo
summarizes ó either Mexico was being invaded by someone or the country was
caught up in civil war. A turning point was the declaration of the republic
following the execution of Maximillian in 1865.ìEight years later things
had stabilized,î Castillo says, ìand that was when one first thought of
honoring Ju·rez with a world-class theater in Guanajuato. ìIt was clear
from the beginning that it would bear his name.î

Although Ju·rez, then president of the republic, was busy running from
both the French and the Austrians, he spent some time in Guanajuato and for a
few weeks made it his capital. ìModern Mexico was born in the 1880’s,î
Castillo says. ìAnd it was a time of economic revival, in which a lot of
theaters were built. ìIt was also a time when French culture dominated in
the country, and this was a major influence on the original design of the
Ju·rez.î 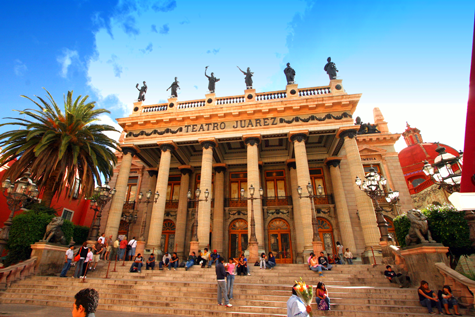 Cornerstone of the theater was laid in 1873 and work began on Noriegaís
plans. Two years later work was suspended and then resumed in 1892, plans now
revised by Antonio Rivas and Alberto Malo, who opted for greater ostentation
in the building. ìThey were not architects!î Castillo laughs.
ìThey were mining engineers.î

The Ju·rez finally opened on October 27, 1903, with the performance of
ìAidaî by a visiting Italian company. ìIt could have opened a decade
earlier,î Castillo says, ìbut they had to wait until Porfirio Diaz could
attend. ìIt took him 10 years to get here.î Diaz, the major heir of
Ju·rez, was Mexicoís president ó with a brief interruption ó from 1876 to
1911.

Hard times descended on Guanajuato soon after the opening, and for decades
the Ju·rez was used ó Costillo points out ó as everything but a
theater. ìItís a sad story,î he says, ìand it went on for almost 100
years.î

ìIn 1912 it was leased to a private company for movies ó for silent
films, but it went bankrupt in a few years,î he says. ìIt was a ballroom,
a circus and a place for wrestling and boxing matches. ìPolitical
assemblies, pop concerts and local festivities brought in crowds that had no
respect for the building. It continued to deteriorate.î In 1949 the Ju·rez
again became a cinema, and Costillo recalls seeing films there when he was a
boy.

ìBy 1957 it was a ruin, and the cinemaís lease was not renewed. The
Ju·rez was turned over to the University of Guanajuato, founded in 1732 and
long one of Mexicoís most respected schools. Influenced by the
reconstruction of historic buildings in war-devastated Europe, the 50’s
brought renewed interest in the theater. In 1964 a congress of architects met
in Italy and issued the ìVenice Charterî that called for the conservation
and restoration of historic buildings, monuments and sites everywhere.
ìInspired by reconstruction in Europe, the charter was like a new Ten
Commandments for us,î Costillo says. ìBut work was undertaken with no
special criteria.î

It was in 1953 that Costillo had became actively involved in restoration
of the Ju·rez. He his task then was painting the auditorium walls in the
ornate pattern of wallpaper that could not be replaced in kind. ìIt had
been stripped away in bits and pieces by movie-goers,î Costillo says.

In 1951 the University had organized the cityís first full symphonic
ensemble and moved its concerts to the Ju·rez. It was, however, the
launching of the Festival International Cervantino in Guanajuato that finally
brought about the full rebirth of the Ju·rez. Although a contemporary of the
conquistadors, Miguel de Cervantes didn’t make it to the New World ó at least
not during his lifetime. In the past half-century, however, he has become a
living presence in Guanajuato, now a city of 200,000. The author of ìDon
Quixoteî first “arrived” there ó so to speak- in 1953, when students at the
university began outdoor performances of his short farcical plays known as
“Entremeses.” 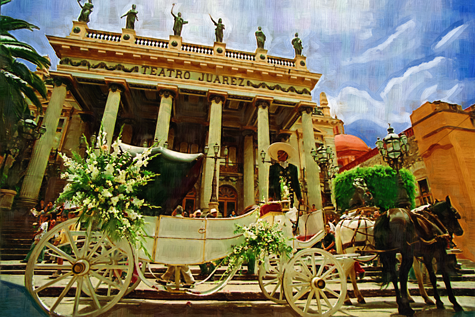 It was on that tradition that the Mexican government in 1972 founded the
Cervantino, which staged its 35th season in October. It is Mexicoís major
arts festival and one of the major artistic events in all of Latin America.
“Don Quixote is the icon of this city,” general and artistic director Irma
Gabriela Caire ObregÛn says, pointing to the 800 items in the local Quixote
Iconographic Museum. “He is an adopted local son, the ‘good fairy’ of the
festival.” (A heavy bronze plaque in the lobby of the theater celebrates 1972
of ìthe Ju·rez year,î celebrating the man who ó as Costillo says –
ìwas Mexicoís Abraham Lincoln.î)

ìLocal pride in the theater revived,î Costillo says, ìbut there were
a lot of problems. The building had to be brought up to code in safety
standards. ìThere were no emergency exits. The original furniture was gone,
and wood had rotted. ìThe building was falling down!î A new wave of
reconstruction was launched ó under Costilloís supervision ó in 1989.
ìThe muses above the entrance had rusted and were replaced,î he says.
ìWood was restored; structural improvements were carried out ó along with
an up-grading of the electrical system.Something major is done every year;
for 19 years the government has invested a significant amount of money in the
Ju·rez. ìThe masonry of the building, having withstood major floods, is
sound, and insects do not like the red pine of the roof!î

And although he does not work directly with the Cervantino, he shares the
festivalís commitment to the Ju·rez. ìWe are constantly in touch,î he
says, underscoring his admiration for Caire. For Caire, named to her post
early in 2006, the Ju·rez is one of the most beautiful theaters in Mexico.
ìWe want to stage more events there,î she says, ìbut itís an old
theater, and there are limitations on what we can present.î

If the Ju·rez long suffered from an absence of the art for which it was
intended, rich compensation has come through the Cervantino. In 1980 Beverly
Sills sang Rosina in ìBarber of Sevilleî there. Birgit Nilsson, Aprile
Millo and Dmitri Hvorostovsky have sung on its stage, and Yehudi Menuhin has
played there. Leonard Bernstein and Mstislav Rostropovich have conducted
visiting orchestra, while the Kronos, Cleveland and Kodaly Quartets have
played chamber music in the theater.

Although at present the Ju·rez is little used outside the Cervantino
season ó the Universityís orchestra now plays in the near-by Teatro
Principal ó Costillo tells of an annual event central to the life of the
city. And one is awed by the celebration there of what Americans know as
Halloween. ìEvery year on November 1 there is a performance of Joseí
Zorrillaís ëDon Juan Tenorio,íî he says. ìItís a tradition that
we could not live without.î

Beyond its beauty and its importance as Guanajuatoís finest
performing-arts venue is the iconic role of the Ju·rez in the city. It is in
every sense the heart of the community, and on a fresh October evening young
people who have never been ó and probably never will be ó inside the theater
sit on its steps enjoying the scene at their feet.

Built on the ruins of a cloister, the Ju·rez sits today in a pedestrian
zone, where countless cafes and street vendors serve a public that seems
always in a festive mood ó a reflection perhaps of the building itself. In
198 UNESCO designated Guanajuato a World Heritage Zone in recognition of its
beauty and culture. The Ju·rez was no doubt a factor in granting that
recognition. (Fans of ìCitizen Cane,î by the way, will be delighted to
know that actress Dolores del Rio was honorary president of the original
Cervantino board.)