Set in some hazy
fin-de-siècle fairy tale Orient, the tale is ageless, its symbolic structure based on many an ancient
trope and theme, especially beloved in such near-contemporary versions as Andersen’s “Little
Mermaid,” Pinocchio and Die Walküre — but Frau could never have been created for the stage
before the era of electric stage lighting. There is the matter of the Empress’s shadow (which must
not exist until the penultimate scene, when it should be apparent and obvious), but the many
other spectral intruders and the pauseless flow of scene to scene and world to world would have
defied the pre-electronic stage. Hofmannsthal and Strauss deserve credit for rooting their
homegrown myth so securely in a mystic fabulous while making full use of the latest (1919)
technology to bring it to life. Companies that venture to stage Frau must gather the finest vocal
and instrumental forces, needless to say, or risk falling on their faces — but they also risk
disaster if they simplify excessively, if they do not go for broke in the visual line.

All of this was clear to the Lyric Opera of Chicago when they put a new production of the opera
(the second in their history) together this fall. The stage is agog with smoke and mirrors,
turntables within turntables so that characters and set elements drift apart and off the stage,
ominous ramparts and portals whose openings and closings must be calculated to a hair, scrims
and smoke machines, cages and lightning bolts of neon tubing, whirling dancers almost invisible
in the darkness and startlingly visible (nearly nude) hung from the ceiling or rising from a well
mid-stage, singers obliged to perform while on horseback in mid-air, or from a rickety bridge
across mid-stage, or behind a distorted eye or confined to a spotlight by fluttering hands, barely
seen. The gimcrackery is choice, the stage pictures and the vision of three separate worlds (spirit,
earthy, and the imperial middle realm) rather more coherent as well as handsome than in, for
example, Herbert Wernicke’s recent Met production.

Another word about the dancers, who deserve it: dance is most often used in opera either as
divertissement or sideshow, in any case as a separate thing where one relaxes the ear and lets the
eye take over, welcome or unwelcome as that may be. The LOC Frau is a rare and impressive
example of using dance as part of the action, enhancing the magic, motile scenery. The dancers
never call attention to themselves (as they so often do when choreographers take up direction);
they are part of the stage magic here, creating the dungeons in Act III simply as hands fluttering
in the faces of those imprisoned, swaying about the Amme in Act I to suggest the world of dark
spirits she inhabits, becoming the hands and heads of the unborn children and the flood that
sweeps the scene away in Act II. 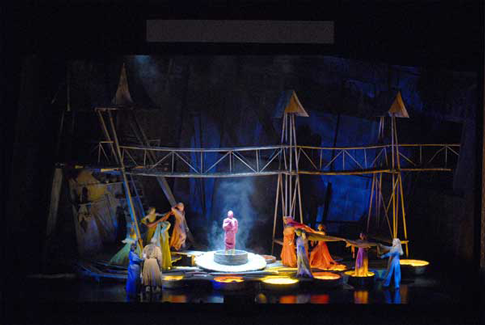 The singing is sumptuous, especially from the ladies. Christine Brewer is today’s great
Wagnerian heroine, her voice room-filling and rock-solid but never cold; rather, warm, deeply
moving, an earth-mother Dyer’s Wife. Deborah Voigt’s Empress is a shooting star spewing Ds
and C-sharps into the heavens of Act III and Jill Grove, in a breakout performance, was in
complete command as the wicked Amme, one of the toughest roles in the repertory. Robert Dean
Smith is evidently immune to acrophobia — and I refer to the Emperor’s tessitura as well as the
flying horse. There were a few rocky phrases from Franz Hawlata, generally a sturdy and
sympathetic Barak, the figure whose baritone must be the center of this morally centered tale.
The twenty small roles were well-handled, in part by having some of them acted (the Falcon, the
Apparition) by dancers while the singers stood discretely behind them, garbed in black. Sir
Andrew Davis drew all the complexities together to tell this complicated story clearly and
mellifluously. The usual cuts were, alas, observed — the show nonetheless ran to four and a half
hours with intermissions.

One comes away from such a performance feeling, in the first place, the awe any first-rate
presentation of this complicated opera must produce — who was keeping track of which doors
should rise and which fall while tableaux and performers floated in and out of them, often in
pitch dark? Rare is the military operation that boasts such precision. Paul Curran’s production,
Kevin Knight’s designs and David Jacques’ lighting were constantly inventive and astonishing
— though I did think the mystic Empress should be dreaming in something classier than a big
brass bed, and the upturned umbrella used as a boat in Act III seemed to have strayed in from
some other production entirely. These two props screamed “Fix me!” in tones as loud as any
brass in Strauss’s orchestra.

I did have one misgiving about the direction: In their efforts to “humanize” a story full of tropes
and archetypes, the producers and the actors (one must discuss them here in their non-singing
aspects) have given the characters behavior and expression that suggest unnecessary and
inexplicable subtexts to the action. We are in a fairy tale world here, where “spirit” beings aspire
to human-hood, fish dinners sing, and apparitions seduce. This can be staged “realistically” — as
at the Wiener Staatsoper, where the Empress is a modern Viennese lady on a couch talking her
way through psychoanalysis — but having chosen, as Chicago has, to give us a fairy tale with all
the trimmings, it is unwise to give the characters unnecessary layers: good should be good here,
and wicked, wicked. Fairy tale, like our unconscious, knows no half measures.

Awkwardness is most clearly apparent with Deborah Voigt’s Empress, the titular lady without a
shadow. Having played the role “archetypically” in half a dozen other stagings, the newly svelte
and agile Miss Voigt has decided to get into the swim of things. Instead of sitting in the shadows
observing the Nurse’s devious plots and the pain they inflict on Barak and his Wife, developing a
moral conscience and, thus, a soul, this Empress is actively complicit with the wickedness,
crowning the Dyer’s Wife, flirting with the Dyer, observing the temptations with a cynical smirk.
It makes her transformation — the central moments of the drama — more difficult to accept.
Grove’s Amme, too, tended at times to convey comic fluster rather than malice in her gestures,
which contradicts the assurance of her stated utterances.

But these are minor points in a thoroughly winning evening of opera at its grandest.

Click here for audio and video courtesy of Lyric Opera of Chicago.