So also for those unaware that Caesar
and Cleopatra ever visited Chicago: Under the auspices of Handel and the Lyric Opera, they
came, they saw, and they kept local opera-goers happily glued to their seats for nearly five hours
at a stretch.

A lot of the credit for this goes to David McVicar, who admits the first objective of the
production he designed for the Glyndebourne Festival (and which, truth to tell, fits a bit
awkwardly in a house twice the size of Glyndebourne and three times the size of any theater
Handel ever wrote for) was to entertain. Basing his interpretation on parallels between Rome’s
conquest of Egypt (and Cleopatra’s conquest of Caesar) and red-coated Britain’s occupation of
Egypt around 1900 (and the Bollywood dance-ical sensibility in movies now made in the former
British Raj), he has given us an all-singing and usually dancing spectacle that puts anything on
Broadway to shame for special effects, never mind the contrast of Handel’s sublime melodies to
anything pop. Too, the singers here, besides being as attractive, athletic and showy as anyone in
Mumbai, fill the enormous venue without microphones.

A few spoilsports did grumble that the jokiness sometimes got in the way of their pleasure in
Handel (though few of the jokes occur at serious, semi-tragic moments) and the more delicate
ornamentation of the baroque line which is so necessary a part of Handel style often got lost in
the expanses of Chicago, but still: five hours of baroquerie on a Monday night, and they stayed in
droves!

Giulio Cesare is probably the most popular of Handel’s forty operas. There are two good reasons
for this: the opera concerns the affair between two personalities whose reputations still linger in
the popular consciousness (in contrast, how much do you really know — or are excited at the
prospect of learning — about Deidamia, Amadis or Lotario?), and more important, the libretto is
first rate, tracing the character development of its six principals, aria by aria, until they succeed
or fail to grow into triumphant success: Cesare, the Roman conqueror, must discover that he has
a heart; Cleopatra, the amoral pin-up, must fall truly in love and learn the courage and empathy
that will suit a reigning monarch; Sesto, a child when we first meet him, must mature into a
Roman warrior, capable of defending his mother and avenging his father; Cornelia must learn to
survive her grief at her husband’s murder; and Tolomeo and Achilla, the conniving and
dishonorable Greco-Egyptians, must learn sincerity, courage and honor — which they signally
fail to do, meeting their proper rewards. It’s didactic and old-fashioned, but it is not (as so many
baroque libretti are) haphazard: genuine tests are met or failed here, the characters move on or
die, and the action is clear and constant. Revivals in days past (but not long past) often
rearranged and interpolated music, making mincemeat of Handel’s clarity, but the days when
audiences accepted this and shrugged off their confusion are happily behind us.

Those familiar with the DVD of the McVicar production will also be familiar with his Cleopatra,
Cornelia and Tolomeo, Mmes. de Niese and Bardon and M. Dumaux. The interpretations of all
three have deepened emotionally while the athletic feats of de Niese and Dumaux remain
jaw-dropping and tireless. My problem with Ms. de Niese, so lovely, so charming, so healthy, so
inexhaustible, so eager to conquer the world (isn’t that teenaged Cleopatra all over? was even
Vivien Leigh in slinky silk — in the classic film of Shaw’s play — a sexier kitten in the role?)
is that it is never clear to me that the deeper emotions, the discovery of her own heart in such
arias as “Piangero la sorte mia” which are the heart of the opera, mean much of anything but
breath control to this youthful singer. In Handel’s operas, fast arias like “Da tempesta” and
Cesare’s “Quel torrente che cade” excite the newcomers, but the slow ones express the emotional
truth of the work, and de Niese does not yet — or, perhaps, in a show as energetic as the
McVicar staging, can’t — reveal them, or demonstrate that she appreciates them. There is time
for her to deepen, however; for the present, she’s fun to hear and an awful lot of fun to look at.

Mr. Dumaux still does backflips and cartwheels as Tolomeo, as on the DVD, but his singing is
becoming a thing to take pleasure in as well. It is appropriate that he is more the willful tyrant
than the spoiled brat, since this production restores so much music that is usually cut — both
Tolomeo’s lust for power, vengeance and Cornelia, and Cornelia’s and Sesto’s triumph at his
destruction get more play than they usually do. This extends the evening considerably, but giving
Cornelia her one joyous aria saves Bardon, as Cornelia, from a part only a Stephanie Blythe (or a
Maureen Forrester) could save from tedium. Bardon’s pleasant voice lacks the personality of
those ladies; she needs that dollop of energy at the end.

Maïte Beaumont, the Sesto, has a bright, clear alto, quite exciting in adolescent triumph but also
touchingly vulnerable in the self-pitying introspection of “Care speme.” She also plays a young
boy credibly; I’d love to hear her Cherubino or Oscar. 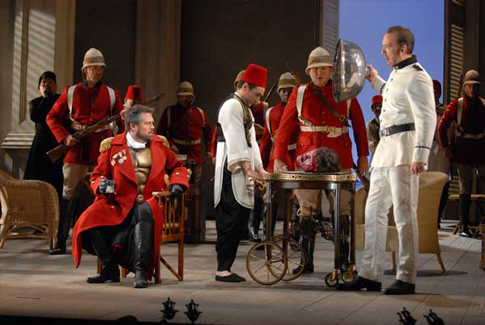 David Daniels, probably the world’s foremost Cesare, undertakes the title role (as he has nearly
everywhere else in the last ten years). This is a role — Julius Caesar, for gosh sakes! Soldier!
Lover! Statesman! Bestselling author! whose name became a synonym for monarch! — that, for
me, cannot be credibly impersonated by a woman, though I never saw Baker or Troyanos
undertake it. Daniels definitely plays a most masculine Cesare, all right, but his luscious voice is
slow to warm up. Perhaps the vast spaces of this opera house are unkind to his voice (which is
not vast), his lapidary phrasing, his sensitivity to the meaning of the words he sings, but even in
smaller houses I have not been impressed by his singing of the first act of Cesare. The arias
might be tossed off by any competent countertenor — even the divine “Va tacito e nascosto”
(staged by McVicar as a warriors’ pavane, with rival armies stomping in time to its studly,
ominous march-time) does not bring out the special throb of Daniels at his best.

By Act II, amorous arias and catastrophic turns of the plot seem to warm him to the task. He
takes off during the battle royal with violin that is “Se infiorito” — but then, another feature of
this singer is the delight he takes in having a partner-adversary to strike sparks: grand duets and
obbligatos always give us Daniels at his best, and he always shows his partner to advantage too
— he is a colleague as well as a sportsman, and here he also a lover — his scenes with de Niese
get quite steamy.

Emmanuelle Haïm earned full marks for leading a much-cut-down Lyric Opera orchestra to a
baroque sound quality startling in its precision the day before performing Strauss’s Die Frau
ohne Schatten — but no doubt the Lyric Opera, like most opera house orchestras the world over
— are getting used to the requirements of the baroque revival. So is the Chicago audience,
which saw few empty spaces as the hours went blissfully by.

Click here for audio and video courtesy of Lyric Opera of Chicago.