McNally, of course, didnít really need a composer. One of the most popular
playwrights of the day, he has an uncanny ability to find words that ìmake
musicî without staff paper. His early ìLisbon Traviataî and more recent
ìMaster Classî document that gift.

McNally, however, struck out in a new direction when he wrote the libretto
for Heggieís ìDead Man Walking,î premiered in San Francisco in 2000 and
now the most performed new opera of the decade. He then wrote the text for
ìAt the Statue of Venus,î which Heggie composed for the gala 2005 opening
of Denverís Ellie Caulkins Opera House. And on February 29, 2008, the
Houston Grand Opera will premiere ìLast Acts,î a chamber opera written by
Heggie for star mezzo Frederica von Stade. Gene Scheer based the libretto for
it on McNallyís ìSome Christmas Letters,î performed at a 2001New York
AIDS benefit. In mid-December the cast and production crew of ìLast Actsî
met in San Francisco for a workshop designed to put the score in final form
for the Houston premiere.

Heggie is pleased with the results. ìEverything looks right, and the
work is really in good shape,î he says. And heís pleased with his
decision to score ìLast Actî for two pianos and eight further
instruments. ìThe pianos are just right for the piece,î he says. ìThey
create a chamber-music atmosphere and they can be lyric, percussive and
orchestral.î HGO music director Patrick Summers will conduct from one
piano; Heggie will be at the other.

McNally wrote ìSome Christmas Lettersî for a New York AIDS benefit in
2001. The play explores the dysfunctional relationship between a mother and
her daughter and gay son through letters and phone calls. In New York Julie
Harris played veteran actress and mother Madeleine. ìI read ëLettersí
seven years ago and I was in tears,î Heggie recalls. ìI fell in love with
it and I said to myself: ëThis needs to be set to music!íî He has
worked with Sheer to make it operatic by adding story lines to the plot.
(Scheer, author of librettos for two operas by Tobias Picker, has
collaborated with Heggie on the song cycles ìStatuesqueî and ìRise and
Fallî and on ìTo Hell and Back,î premiered by the Bay-Area Philharmonic
Baroque earlier this season.)

In ìLast Actsî Heggie has moved in a direction more lyrical than in
earlier works. ìItís really music theater,î he says. ìThe music
serves the characters in the drama.î And thereís even a bit of
autobiography in the story. ìMy father died when I was a kid,î Heggie
says. ìThis could be my life. Thereís so much in it that any family can
relate to.î He sums it up as ìa heavy story with a light feel – a tragic
tale with a lyric undertow.î 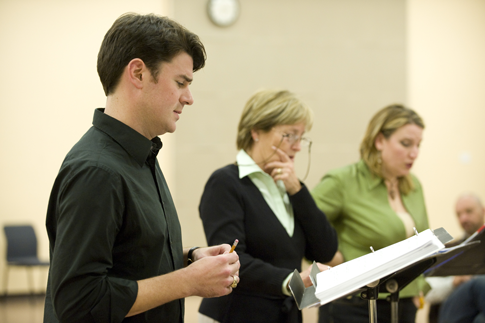 ìFlickaî von Stade, who goes ìway backî with Heggie, shares his
enthusiasm about ìLast Acts.î ìI had met Jake in Los Angeles early
on,î says the most popular – and enduring – mezzo of her generation. ìBut
it was in the ë80s, when he worked in the press room at the San Francisco
Opera that I really got to know him. ìOne day he showed me some of this
songs, and I flipped. They were incredible – simply marvelous!î Von Stade
estimates that she has now performed over 100 Heggie songs in recital. For
the premiere of ìDead Man Walkingî Heggie had suggested that she sing
Sister Helen, the lead in the opera, but von Stade felt this should be left
to a younger singer, and Susan Graham was cast in the part. Offered her
choice of supporting roles, von Stade opted for the mother of Joseph De
Rocher, the man on Death Row.

On the heels of the December workshop, the singer finds Heggie ìin a
whole new place.î ìëLast Actsí is more in a ëpopí vein – more
like Broadway,î she says. ìYet itís not a Broadway show ñ itís
different. And the melodies are incredible.î And after two complete
run-throughs in San Francisco, she finds the score perfect. ìThereís not
one wrong step in it,î she says. ìItís always the right thing at the
right time. ìItís exactly what Jake wanted it to be – and itís
touching!î

And although stories about dysfunctional families are hardly rare these
days, von Stade is struck by the universality of the story. ìIt rings so
true,î she says. ìThis could be any family anywhere. ìItís Terrance
at his best.î Turning to the challenge of her role, the singer comments
that itís difficult to find a redeeming quality in Maddie. ìSheís so
impossible!î she says. ìBut then you realize that people become who they
are for a reason. ìAnd what has happened to Maddie become clear as the work
ends.î

Von Stade turns to the genesis of the work, in which she was involved from
the outset. ìWhen Jake first talked to me about it years ago, he was
thinking of something for Berkeley Rep. ìTerrence was excited about the
project, and we were all feeling good.î Then things got out of hand.
McNally wanted to add characters, and Heggie began talking of a full-scale
Broadway production. It was von Stade who brought the two back to the
original plan. And Maddie, she says, was ìtotally tailor madeî for her.
ìSheís somewhere between my mother and me,î she says, ìand she
strikes very close to home. ìSheís a woman deeply involved with her
children, and her problems are very pertinent to any woman in show
business.î She calls the role both demanding and very taxing emotionally
and sees Maddie as a ìspringboardî from which the daughter and son
develop. And sheís hit hard by a late line in the text when she says: ìI
think these two are going to be okay.îMaddie has a good deal in common with
von Stade, who made an extreme effort to balance her own life between her
career and her two daughters. 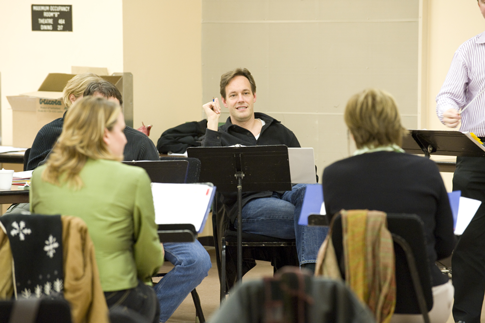 The HGO premiered Heggieís second major opera, ìEnd of the Affair,î
in 2004, when David Gockley was still general director.Anthony Freud, who
succeeded Gockley in 2005, met Jake Heggie during an early visit to Houston.
ìJake told me about this idea that had been washing around, but hadnít
yet found a home,î he says. ìFlicka too has a long relationship with the
HGO, and I had been talking to her about a small-scale work just for her. I
loved this story immediately.î ìWe then brought in Leonard Foglia, who
has worked with both Jake and McNally, to create an in-the-round production
that Freud defines as ìcabaret style.î

Freud, who has obviously seen a lot of opera, admits that he cried at the
end of the San Francisco run-throughs. ìItís wide ranging and very
human,î he says. ìEveryone will find in it something that triggers the
trauma of recollection. ìIt will touch the sensitivity of every member of
the audience.î ìThe intimacy of the piece is its strength,î he says.
ìJake has a unique ability to celebrate the circumstances of a situation.
ìThis is very sophisticated writing.í

ìLast Actsî will be performed in the HGOís 1065-seat Cullen Theater
with the ensemble on stage with the singers. ìThere are no sets,î von
Stade says. ìJust an occasional chair and a mirror. ìEffects are achieved
with light, and the scenes flow together easily. Lighting designer is Brian
Nason. (ìLast Acts,î in three acts without intermission, lasts 90
minutes.) Heggie has recently set the final monologue of McNallyís “Master
Class” for Joyce DiDonato, who has recorded it for release next year. ìLast
Actsî is a co-commission with the San Francisco Opera.

ìLast Actsî by Jake Heggie and Gene Sheer opens at the Houston Grand
Opera on February 29; eight performances run through March 15. For
information and tickets starting at $50, call 1-800-626-7372 or visit www.houstongrandopera.org.

Footnote on “Flicka”: ìRetirementî is not a word in the
vocabulary of Frederica von Stade, born in 1945. Asked about future plans,
Frederica von Stade speaks of ìla sistema,î the Venezuelan program that
provides every kid in the country with music lessons. It has been brought to
the attention of the world in the past year by superb Simon Bolivar Youth
Orchestra and its conductor Gustavo Dudamel, the 26-year-old who has been
named music director of the Los Angeles Philharmonic. Plans are being made by
several American communities to ìcloneî the system, and von Stade has
organized an inner-city childrenís choir in Oakland. (She makes her home in
the East Bay.) ìI work with them twice a week,î she says. ìTheyíre
building a new cathedral in Oakland, and I hope to have the choir ready to
perform there when it is finished.î