We have
already seen Purcell’s ‘King Arthur’ and Vaughan Williams’s ‘Sir John in
Love’ (with the same composer’s ‘Riders to the Sea’ to follow next season)
but the composer playing the largest part in this revival of the English
operatic repertoire is Benjamin Britten. The operas covered so far ñ ‘Billy
Budd’ and ‘Death in Venice’ ñ have proved some of ENO’s greatest successes
of the last two seasons, and this latest co-production of ‘The Turn of the
Screw’ with the Mariinsky Theatre, St Petersburg (where it premiered in
2006), is no exception.

Director David McVicar, always good at exploring themes of corrupted
innocence, views the story’s central ambiguities from an unusual angle by
attributing the evil forces to the children rather than the ghosts. Rather
than being innocents possessed by an evil force, or blank slates ripe for the
overworkings of the Governess’s imagination, these two children were quite
clearly the principal malevolent influence in this drama, and the source of
the ghosts’ powers from the start. In front of Mrs Grose they were little
angels, but whenever her back was turned they were engaging in subversive
rites: turning Flora’s doll into a pig, digging a grave for the same doll
while singing their cherubic Benedicite, and ñ in Miles’s case ñ making
sexual advances towards the Governess.

And yet McVicar still threw in a note of doubt; for example, the
schoolroom scene between the Governess and Miss Jessel was not a dialogue, as
it is often played, but two independent monologues, suggesting that neither
woman has a greater foothold in reality than the other. Chillingly, despite
the obviously menacing character of the children, the audience was still
seduced into siding with them. The characters’ relationships with one another
and with the audience are carefully and intricately designed, but somehow the
audience never feels overtly manipulated ñ just disturbed.

The silent cast of walk-on servants, fast becoming one of McVicar’s
production trademarks, were ever-present as scene-shifters, and went some way
towards addressing the issue of creating a suitably intimate, claustrophobic
atmosphere in a theatre the size of the Coliseum. When the giant sliding
windows of the set shifted, the creakiness ñ which was, I suspect,
unintentional ñ served only to crank up the atmosphere, to which Garry
Walker’s taut conducting was an ideal musical counterpart. 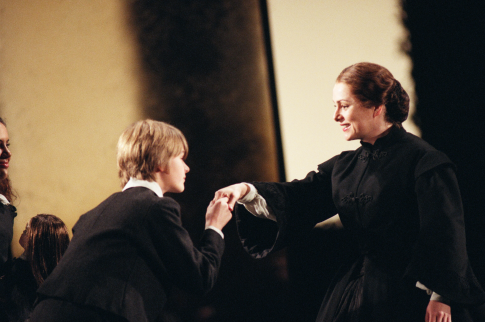 Rebecca Evans sang beautifully as the Governess, though her diction was
far from clear; the honeyed sweetness of her voice and liveliness of her
demeanour made for a particularly unsettling contrast with the children’s
poised coldness and the monochrome darkness of the set and costumes. Timothy
Robinson’s Quint, was lean, hungry, feeding off Miles’s energy; Cheryl
Barker’s Miss Jessel used the intensity of her presence to suck the warmth
out of the atmosphere whenever she was on stage. Singing her first Mrs Grose,
Ann Murray’s characterisation and diction were excellent even if her mezzo
really is very shrill on top these days. The two children ñ the excellent
second-cast Miles, 12-year-old Jacob Moriarty, and Guildhall undergraduate
Nazan Fikret as a Flora in fairly advanced adolescence ñ were really
first-class.

The result was an evening which left a chill in the air and, for the right
reasons, a nasty taste in the mouth.