A dearth of major Wagnerian voices might be, has
been, blamed Ö but other companies do better Ö or so it seems to us New
York Wagnerians.

The current revival of Die Walk¸re, always the most popular of
the Ring operas, is impressively satisfying: none of the singers are
bad, some of them are great, only one of them is even stout (Stephanie
Blythe, who, however, sings like the goddess she plays and moves in a
stately, never clumsy, manner), while an unfamiliar hand on the podium brings
out some unfamiliar colors from the depths of this shimmering score.

The weakest link in the cast was Clifton Forbis, the Siegmund ó his
gravelly, forced quality, an ill-supported top, no lyricism in the
ìWinterst¸rme,î all made this a woeful Wehwalt. The only time he sang
with much power was the cry of ìWalse! Walse!î ó something about this
shout seemed to align his throat properly for the first ó and last ó time
all night. In rather striking contrast, Adrianne Pieczonka, a slim, girlish
Sieglinde, sang with a full tone a bit beyond complete control, and was
underpowered only in the ìtriumph of womanî explosion in Act III. She
might be starting on the road to a major interpretation; Forbis, however,
seems simply miscast.

James Morris had a Mozart and bel canto background when he first essayed
Wotan twenty years ago ó and was then widely expected to fail. Instead, he
thrilled all ears, and he has owned the part ever since. (Could his bel canto
experience be responsible?) Wobbles in his Hans Sachs last year made me
wonder if his Valhalla sun had set, but he was in fine voice during the
second performance of the run of Walk¸res, a little dryer than the lustrous
hue of old, no doubt, but wobble-free, in command of the full range of notes
and dynamics, and an experienced actor of this figure who attains tragic
stature through tardy self-knowledge.

Lisa Gasteen, a star of Rings from London to Vienna to Adelaide,
made her first essay at the title role of this opera in New York. She sang,
it was announced, with a sore throat, and one would like to credit that for
the general weakness of her voice above the staff that began with her first
war-cry and continued to the end of the night. But Wagner was not a high-note
composer, and the rest of her voice was lovely, beautifully produced, full of
deep emotion. 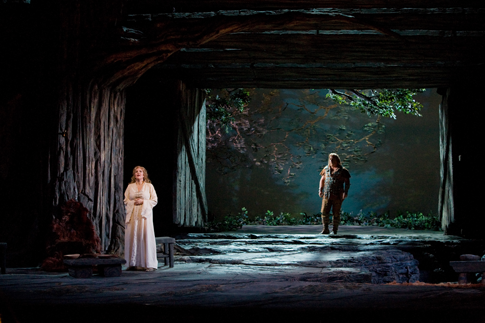 A scene from Wagner’s ìDie Walk¸reî with Adrianne Pieczonka as Sieglinde and Clifton Forbis as Siegmund.

She also cuts a handsome figure and bounds about the rocky sets
with youthful athleticism, as a hard-riding warrior goddess ought to ó but
how many do? In the orchestra, I had doubts about the size of the voice when
it came to filling the Met, and friends who sat upstairs shared them, but
this was an honorable attempt that gave much pleasure. If her health on
Monday is not the reason for her weak top, however, she is hardly the woman
to sing the higher Br¸nnhilde of Siegfried. This experience of her
made one interested in hearing her under optimum circumstances and in many
roles. (A revival of Frau ohne Schatten would suit her nicely ó
sheís sung both soprano leads in Germany.) 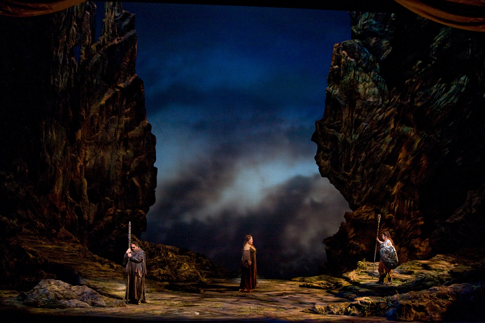 A scene from Wagner’s ìDie Walk¸reî with (from left) James Morris as Wotan, Stephanie Blythe as Fricka, and Lisa Gasteen as Br¸nnhilde

Among the smaller roles, Mikhail Petrenko was especially striking ó
joining the lengthy list of Hundings whom one wishes had more to do, or big
juicy roles in something else in the very near future. (Whatever became of
Stephen Milling?) Kelly Cae Hogan, a singer new to me, was first off the mark
among the valkyries, and one wished her war-cry, clear and focused and
bright, had somehow been substituted for Gasteenís cautious one; the rest
of the gang were also happy choices.

The stage direction seemed to have been tightened, and was especially well
synchronized at such tricky moments as Siegmundís death (and Sieglindeís
flight) and the valkyrie ensembles. The diction all around was exceptional,
precise without being intrusive. Lighting for this production seems to be
getting steadily dimmer ó which makes things like the magic fire all the
more effective.

Lorin Maazelís approach to Wagner was vivid and the pace snappier than
we are used to, which rather heightened the excitement of a happy occasion.
As at every great Wagner performance, one heard things, instrumental colors,
one had never noticed before. Consider, for instance, Wagnerís use of
kettledrums for everything but beating time: enhancing this, emphasizing
that, pointing words or other instruments, a sudden insertion of ominous
texture in the midst of a leitmotiv associated with things not ominous ó
insofar as anything in the Ring is free from shadow.