That is one thing that makes John Adams’ “Doctor
Atomic” unique among recent American operas. At the same time, the success of the work gives
hope that the national ear is not totally deaf to the urgency that speaks so strongly from this
account of the anxious hours leading up to the first explosion of a nuclear bomb in the New
Mexico desert on July 16, 1945. “Doctor Atomic,” directed by sometimes enfant terrible Peter
Sellars, who also wrote the libretto, was premiered by the San Francisco Opera in 2005.
Following performances in Amsterdam last summer, the Chicago Lyric Opera has revived the
SFO staging as a major event of its current season.

Adams first tried his hand at contemporary history in 1987 with “Nixon in China.” And Sellars
— as Edward Said commented on his work with Hindemith’s “Mathis der Mahler” in London in
1986 — is one of the few in this country “who connect opera to an ongoing social political
debate” in an effort to combat “the prevailing belief that operas are essentially harmless, if not
completely antiseptic.” There is obviously nothing either harmless or antiseptic about “Doctor
Atomic,” defined by Adams as “an unflinching drama of contemporary humanity in crisis.” And
the acute sense of crisis in today’s world, where leaders threaten the use of nuclear weapons with
the ease that their forefathers played with tin soldiers, underscores the sense of urgency felt in the
audiences that pack the city’s Lyric Theatre for eight performances beginning in December and
continuing on into January.

The 1945 detonation of “the Gadget,” as those involved in the Manhattan Project called that first
bomb, stands as the major turning point in all of human history, for with it mankind unleashed a
power capable not only of heretofore unknown destruction, but able even to destroy the earth
itself. The fear shared of igniting the atmosphere that haunted Robert J. Oppenheimer, father of
the first bomb, informs “Doctor Atomic” from beginning to end, and Adams has done an
incredible job of expressing it — in part through electronically generated sounds woven
seamlessly into the score — to create what he has called “a post-nuclear holocaust landscape.”
The opera ends openly at “zero minus one,” leaving the audience to deal with the consequences
of the scientists’ “success” in the desert. It is thus an intentionally discomforting work about
events, the relevance of which has grown immensely over the past half century. 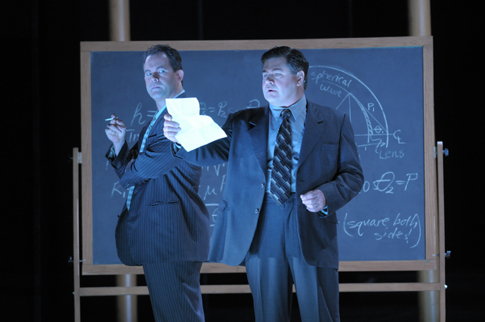 Sellars, drawing deftly upon documentary material — much of it only recently made public —
and poetry to which deeply intellectual Oppenheimer and his troubled wife Kitty were attached
— stresses that the physicist in his challenge of the unknown was the Faust of the 20th century,
and he pairs him tellingly with Mephistophelean Edward Teller, later famous as the mastermind
of the hydrogen bomb. It is the confrontation of Oppenheimer’s intellectual honesty with Teller’s
lust for power that elevates “Doctor Atomic” beyond “mere” art in its concert for moral and
ethical issues.

The Lyric is fortunate in having five of the SFO principles in its cast, and Canadian baritone
Gerald Finley is even more of a dead ringer for nervous, chain-smoking Oppenheimer than he
was at the premiere. And Richard Paul Fink, the reigning Alberich in today’s “Ring” cycles,
makes Teller more threatening that he was two years ago. Highlight of the Chicago staging, seen
on December 18, was Finley’s delivery of the haunting “Batter my heart, three-person’d God,”
that concludes Act One. (The text is by John Donne.) 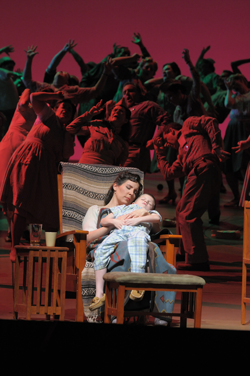 In extensive revisions of the score Kitty Oppenheimer is now a soprano, warmly sung by Jessica
Rivera, who has made her mark as both as both Nuria and Margarita in Osvaldo Golijov’s
“Ainadamar.” One critic called “Am I in your light?,” her Act-One “serenade” of her husband “a
bundled Mahlerian adagietto of emotion,” and in Act Two she brings Cassandra-like insight into
her exchange with Native-American nursemaid, sung with earthy sensuousness by Lyric studio
artist Meredith Arwady.

Despite revisions since the premiere, however, the tension that has the audience writhing in Act
One is lost in Act Two, in which the score loses its impulse. It will be interesting to see what
further revisions are made when Penny Woolcock directs a totally new production of “Doctor
Atomic” at the Met next season.

Conductor Robert Spano, enviously at home with contemporary scores, brings a sharp focus to
Adams’ score. Questionable, however, are the largely aimless gyrations of an octet of dancers
choreographed by Lucinda Childs.

Peter Sellars sums up “Doctor Atomic” as “a reality that we’re living with every minute,” and the
overall excellence of the Chicago staging left no doubt about. Indeed, as Thomas Mann once
wrote in another context, the opera focuses attention on a time in which “so much began that has
not yet left off beginning.”

The positive response of the Chicago audience is encouraging, for it indicates a willingness —
indeed, perhaps a need — for opera that is unafraid to engage itself in compelling and complex
issue. True, “Doctor Atomic” will never replace “Carmen” and “Butterfly” in public favor, but its
success indicates the existence of a vast number of opera-goers who seek more than mere
entertainment. It is a work that demands a critical response from all who see it. And the opera is
of particular relevance to Chicago, for it was beneath the football field at the University of
Chicago that Enrico Fermi set off the first controlled nuclear chain reaction in history.

A film to watch for

It is sad indeed that a major companion piece to “Doctor Atomic” is largely unavailable to the
current audience of the opera. Although “Wonders Are Many: The Making of Doctor Atomic”
has been shown at several film festivals, it is not yet available through regular DVD channels.

Made for public television, word is that the film will not be distributed until it has been seen on
PBS, and at present no date has been set for its showing there. An engaging counterpoint of
details from Oppenheimer’s life and career and the creation of “Doctor Atomic,” the film reflects
the same anxiety that accounts for the on-stage apprehension so compellingly portrayed by
Sellars and Adams. It is the work of filmmaker Jon Else, whose credits include award-winning
documentary on Oppenheimer and the Manhattan Project “The Day After Trinity” Those who see
“Doctor Atomic” should watch PBS schedules.