Dramatically, Lucia di Lammermoor is perhaps the composerís finest work, and one of the most obvious precursors to Verdi, but itís also one of the most problematic to cast, not least because of its daunting historical association with some of the greatest sopranos and tenors of the twentieth century.

If any opera company can be relied upon to make a credible ensemble piece of an opera thatís known for being a star vehicle, itís ENO, and this first new production of 2008 is a triumph. It may not be orchestrally thrilling ó Paul Danielís conducting doesnít really allow any rhythmic variation or space, at least for the first two acts ó but the staging is dramatic, emotionally involving and coherent, and the principal casting is almost faultless. All did not go entirely to plan on opening night; singing the chaplain Raimondo, Clive Bayley succumbed to a chest infection part-way through the first act and he continued to mime the role to the voice of his cover, Paul Whelan, who is due to sing two scheduled performances of his own at the end of the run, but who on this occasion sang from one side of the proscenium.

In David Aldenís bleakly monochromatic production, with sets by Charles Edwards and costumes by Brigitte Reiffenstuel, emotion takes second place to practical and political considerations. A fixation with the past ó particularly childhood, and images of dead ancestors ó prevents anybody from influencing their own future or bringing anything interesting or new into their lives. It has turned Enrico into a bitter, almost emotionless shell, with a perverse obsession with his naÔve young sister, whom he keeps trapped in childhood before brutally íbreaking her iní and throwing her into her unwanted marriage to Dwayne Jonesís soulless pretty-boy Arturo. Mark Stoneís sense of bel canto legato leaves something to be desired, but the darkness in his voice makes his Enrico deeply nasty.

Edgardo is really no better. While Enricoís reaction to his surroundings and the events of his past have turned him introverted and cruel, Edgardo has become careless, rash and impetuous, which ultimately makes him almost as responsible for Luciaís fate as her brother. Barry Banksís vocal and dramatic power belie his small stature; his presence is easily a match for Stoneís, and his final aria sequence is thrillingly, beautifully sung. 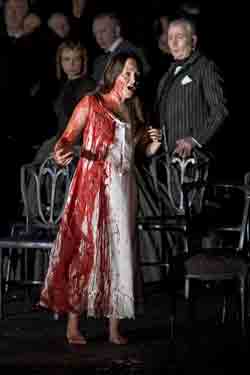 In the tile role, Anna Christyís remarkable physical portrayal and crystalline soprano ó not audibly marred by the bronchitis which had prevented her from completing the dress rehearsal ó make her utterly convincing as this troubled, abused young girl. There is something other-worldly about her voice, and its partnership with the glass harmonica (restored to the Mad Scene as Donizetti intended) creates a chilling resonance. Although the libretto refers to her passionate nature, passion is lacking; she is more of a dreamer. We first see her perched at one side of a miniature stage, gazing obliquely at the closed curtain; she is discovered there again following Raimondoís revelation that she has murdered Arturo, and during the mad scene, after the curtain is pulled back to reveal her husbandís bloodied body, she gradually retreats into the ìstageî area as if it is the realisation of a long-held dream.

Tellingly, the blood which drenches Luciaís and Arturoís wedding-night garb is almost the first colour thatís been onstage all evening; it serves as both a coup de theatre and a symbol of Luciaís release through madness from the bonds of her dead, grey, repressed surroundings.