Shrouds mantle the vaults of heaven; the gilt and sparkle of the opera house seem to mock the gray mood.

Let me explain why I was eager to hear Olga Borodinaís Carmen again: She starred in a close-to-perfect series of performances of the opera a few years ago, ably partnered by Roberto Alagna (such a piteous child when he finally got the message in the last act, ìTu ne míaimes plus?î and then leaped for her throat) and Rene Pape (the sexiest of all possible toreros).

At that performance I felt I was seeing Bizetís Carmen for the first time ó seeing the character as Bizet conceived her, as she is almost never performed. She was not a sexpot. She couldnít be bothered to deal with masculine fantasies. She walked in on her way to work, sneered at the idiotic, amorous male chorus, sang a song (why not? She had a great voice), noticed the pretty soldier on the sidelines and tossed him a flower ó for the hell of it. She was a Carmen who didnít care if we were staring or not. Most Carmens work far too hard ó they shove their poitrines in every face, they hoist their dresses to display their legs, their world is all about sex. Not Borodina ó her world was all about doing what she wanted to, with whoever cared to join her ó and snapping her fingers at those who would not. In Act II, when Frasquita and Mercedes pushed themselves in Escamilloís face, this Carmen sang ìLíamour,î pensively (and in that low, dusky, impossibly sensuous Borodina voice) ó she wasnít singing about love to attract Escamilloís attention, she was brooding about it to herself. And that was just what did attract his attention. Was Jose going to kill her? All right ó he was going to kill her. But he would not keep her from being herself out of something so alien as fear.

That was Carmen. A real, a credible, an adorable Carmen ó precisely because she did not care if we adored her or not. She was herself. And with Borodinaís voice.

But last week something fell on Borodinaís foot, and she did not sing on February 19.

Her replacement was Nancy Fabiola Herrera, a singer unknown to me. Herreraís Carmen was no last-minute exercise; itís a finished portrait, everything in place, comfortable on the enormous Met stage, no matter how many choristers and herds of farm animals Franco Zeffirelli clutters it with. Not really a surprise, as Ms. Herrera was scheduled to take the role next week. Its nuances were hardly strange to her. 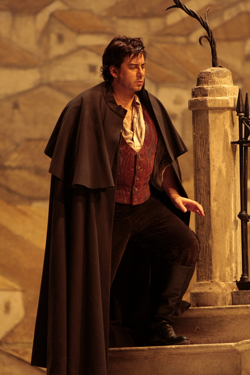 She is a handsome young woman with a handsome voice, a pleasing quality in the lower notes and no break. She can certainly sing it, plus she can act and dance, and plays castanets as well as any Carmen since Teresa Berganza. (Iím told she has zarzuela training.) But her Carmen was a clichÈ: the spitfire flirt. She sang her arias prettily enough, but she was trying to please. Of a deeper, more self-conscious Carmen there was no sign until the fortune-telling of Act III, when she withdrew into herself. She was not so pretty any more, a dark and brooding quality came over her voice, she seemed to withdraw into herself and become one with the music; the opera began to seem to be her story.

Just then, however, she came up against a rival worthy of her steel ó Krassimira Stoyanova, one of the great singing actresses of our time, whom the Met has squandered on the role of Micaela. (She will be our Donna Anna next year, however; Iím expecting fireworks.) Stoyanova sang the aria beautifully, but it was her confrontation with Jose and Carmen that made us sit up straighter: she wasnít just defeated in love, she was angry at what lust had done to the man she loved, angry at Carmen (at whom she barely deigned to look) and furious at Jose. These lines are throwaway; in most performances one hardly notices them; in this Carmen all three performers were electric, their confrontation crackled.

These later acts were Marcelo ¡lvarezís best as well. A burly man, he is not flattered by Joseís uniform; as a thuggish smuggler, whatever Carmen might say, he seems perfectly at home, capable of any violence. This made up for a weak, ill-supported account of the Flower Song. Lyric moments are not, evidently, ¡lvarezís forte; when he must be passionate, he is an interesting singer. Someday, not too far off, an Otello ó but just now, I wouldnít want to hear him in the love duet of that opera until he has worked on his lyric phrasing. Just now, when he tones down the passion in order to plead, he merely sounds weak.

His madness in the final scene was less pitiable, less human than Alagnaís, but effective. He and Herrera seem to have worked on this: they did a neat little bullfighting dance, a paso doble as it were, when he came at her with his knife and she dodged, fearlessly and, with a glance of contempt, walked past him ó exposing her back ó daring him to do his worst. It was a thrilling conclusion, and drew a standing ovation.

Lucio Gallo was the least impressive toreador I can recall, and not merely because he is too fat to evade a slow, blind yak ó his singing is without personality, pretty notes phoned in. You did not notice him; you were surprised that anyone noticed him. He has no stage gifts, and the Met appears to have stuck him in at the last minute, when they changed a run of Hoffman for Carmen late last spring, hoping it would all fall into place. Iím guessing the Met also did not think through the casting of seven-foot-tall John Hancock as Dancaire opposite four-foot Jean-Paul FouchÈcourt as Remendado ó I exaggerate, slightly ó but they seized the opportunity for some delicious Mutt-and-Jeff muggery. When they nudge each other, as comrade smugglers will, speculating on the same female rear end, what different acts (we ponder) do they imagine performing? Jeffrey Welles sang a worthy Zuniga. (Why not give him Escamillo? Or Hancock? Neither has the physique du role, but they could both put it over with flair.)

Emmanuel Villaume conducted; the opening prelude was unsatisfactory, all crash-bang-boom and clichÈ. The preludes to the other acts were more satisfactory, more breathable, and he was gracious to the singers, both familiar and (in Ms. Fabiolaís case) unfamiliar.

The Zeffirelli Zoo Story production (horses, burros, dogs) holds up well, but I object to his having set the opera ó three acts of which are supposed to take place in the riverside plain of Seville ó in mountainous Granada, solely because the sets (especially for Act II) thus become more scenic. Let Spain be Spain.