No! — at least not when the designer in
question is Mark Grey, who is now emerging as a major American composer.
Listen to Greyís new ìEnemy Slayerî and youíll hear what the
difference between a designer and an engineer is. The beneficiary of
extensive collaborations with John Adams, Peter Sellars and the Kronos String
Quartet and of work at a Norwegian jazz club above the Arctic Circle, Grey
understands sound — the raw material of music — as a fashion designer
understands fabric, color, cut and style.

ìI sit in the audience surrounded by peopleís reaction to music,î
says Grey, now 41. ìI feel their emotional energy and I know how to sustain
a tension that keeps them involved.î In ìEnemy Slayerî Grey has woven a
sonic tapestry that overwhelmed the audience at the premiere of the work by
the Phoenix Symphony on February 7.

Commissioned by the orchestra to mark its 60th anniversary, the 70-minute
oratorio is something new in music. One does not seek to define the style of
the score, but surrenders rather to a flow of energy that parallels the
forces of nature. True, Grey employs bi-tonal and bi-diatonic means to make
the score increasingly atonal as the story develops, but these are only the
externals of an achievement that has all the markings of a Wagnerian
Gesamtkunstwerk [italics] — a composite work of art that might well prove a
major monument of early 21st- century music. And the contemporary relevance
of ìSlayer,î subtitled ìA Navajo Oratorio,î will astonish those who
come to the work ìcold,î expecting an evocation of the Native-American
past but confronted by a wrenching drama of the present day.

A young Arizona native returns to his people from a desert war, where a
cousin died in his arms. “Your blood poured brightly through my hands like a
lamb being slaughtered,î sings the baritone soloist. ìI could not stop
it!”

In the story, told in verse with urgency and economy by Laura Tohe, a
Navajo poet on the faculty of Arizona State University, the monsters of
native myth become the tormenting memories of death and devastation that
haunt the returned soldier and prompt him to tell his story. Although
Greyís ideas for the oratorio reach back several years, the work — once
defined — was quickly written. Grey met Michael Christie, now in his third
year as music director of the Phoenix Symphony, in 2004 in Rotterdam, where
both were involved in the staging of John Adamsí ìDeath of
Klinghofer.î

ìSeveral times we took the train to Amsterdam to hear the Concertgebouw
and visit museums,î Grey says. ìThe trip was an hour each way, and that
gave us time to swap ideas.î Christie premiered Greyís violin concerto
ìElevationî at the (Boulder) Colorado Music Festival in 2005 with Leila
Josephowicz as soloist. The conductor had just accepted the Phoenix
appointment and talked with Grey about a new score for the orchestraës
up-coming anniversary. “Michael is eager to premiere new and exciting
works,î Grey says. ìAnd although he left the door open to me, the idea of
an oratorio came up immediately.î

Grey thought about a re-telling of the David and Goliath story, but found
that it had little meaning for Phoenix. At that point he stumbled on Monster
Slayer and his brother, central figures in the Navajo epic of creation. Twin
warriors, they made the world safe for others. Grey was especially fascinated
by Nidaa’, the Navajo ceremony that washes away the psychic torments
resulting from violent acts. When Enemy Slayer returned from killing the
monsters that had threatened his people, he went through this ceremony. The
relevance to a modern veteran is obvious.

ìWe were not out to make this a literal translation of myth,” Grey says,
“but to view a ceremonial path through a contemporary lens.î Grey found
librettist Laura Tohe by googling [does that need quotes?]ìNavajoî and
ìpoet.î 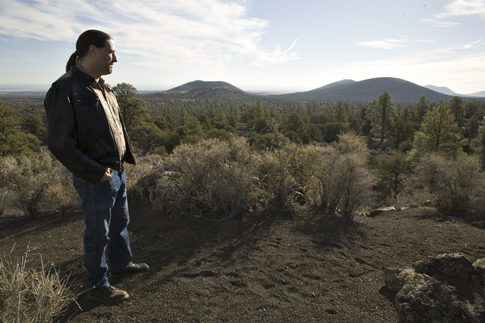 Born on the Arizona reservation and educated in one of its boarding
schools, Tohe is now professor of English at Arizona State in near-by Tempe.
And although Tohe admits that when she accepted the assignment as librettist
she had to look up both ìlibrettoî and ìoratorio,î the idea of an
updated version of native myth caught her fancy.

As Grey continued his research he saw this story increasingly within the
context of the entire Southwest, for the Navajo reservation, the largest in
the United States, reaches into New Mexico and Utah. ìItís a region rich
in creation stories,î Grey says, ìand more and more I felt the energy of
this region with its mountain spirits, deities and monsters. ìAnd it was
clear to me that this would be a large work — a work for mammoth chorus and
orchestra.î

Greyís source material, of course, came from oral tradition, and that
posed a problem. ìThe minute you write something down, you remove it from
its ceremonial function,î he says. ìAnd out of understanding for the
Navajos and their community, we did not want to do that. ìWhat we wanted
was a contemporary window on a very old story.î And Grey opted for a single
solo voice, a baritone protagonist as the suffering soldier and kept at his
reading while Tohe moved the project forward. ìLaura got me involved in a
dialogue with the Navajo community,î Grey says. ìShe put together a group
of elders, and with them we discussed cultural sensitivity — what was
appropriate and what wasnít. ìShe opened doors and built a bridge between
us.î

Grey speaks of his collaboration with Tohe as ìa shared passion.î
ìWe achieved an incredible balance between Navajo tradition and a
contemporary dialogue,î he says of the Strauss-Hofmannsthal relationship
that characterized their collaboration from the beginning. ìIt was back and
forth from the outset; we worked in tandem. I sent Laura fragments of the
score, and she came by to talk with me. ìTogether we visited places
associated with the story, and the cultural palette grew wider and
wider.î

In one of their first conversations they agreed that there would be no
effort to make the score ìsound Indian.î Grey was determined to avoid the
stereotypes that one encounters in films — and in contemporary operas.
(Well-intended recent operatic exercises in cultural tourism come to mind:
Henry Malliconeís ìCoyote Talesî (Kansas City, 1998). David Carlsonsí
ìDreamkeepersî (Salt Lake, 1996; Tulsa, 1998, and Anthony Davisí
ìWakondaís Dreamî (Omaha, 2007). Grey felt no temptation to
ìimportî drummers and dancers from the Navajo nation. ìTheir tales are
told with dance,î he sys. ìIt is all part of a myth-rooted ceremony. You
cannot take its components out of this context.î

The chorus — director Gregory Gentry expanded the PSO Chorus to 150 for
the premiere — speaks for the Navajo people and in a larger sense for all
humanity. ìFamily and community are especially important for the
Navajos,î says Grey, noting that the chorus functions here much as it does
in Greek tragedy. ìThe ensemble speaks with an ancestral voice; it is there
to help — and to cleanse the returned soldier.î (Tohe tells of an older
brother who never recovered from his involvement in the Vietnam War. Upon his
return to Arizona he refused ceremonial cleansing and died at 40 from his
exposure to the toxic environment of war.)

Given the power of Greyís music and Toheís poetry the inclusion of a
visual perspective on this story might seem superfluous. However, what
photographer Deborah OíGrady contributes to this production is far removed
from the travelogue sometimes considered a bonus at concerts. With what she
defines as ìprojected visualizationsî OíGrady has brought another
dimension to the oratorio. Using the latest digital software, she underscores
the sweep of the music with images that move and morph and make the Arizona
landscape an integral part of the work. “I tried as much as I could to be
sensitive to the music,” OíGrady. ìAnd with digital technology, you can
do something more sophisticated than just one picture fading into
another.”

Most moving are OíGradyís shots of the tattered flags above the Fort
Defiance Navajo Veterans Cemetery. (OíGrady, by the way, is married to
composer John Adams.) Soloist for the premiere was Scott Hendricks, a
youthful American now in great demand in European opera houses.

ìEnemy Slayerî is a big work — in the sense the Mahler is big. It
requires space to tell a story of urgent importance that reaches across
cultures and centuries, and at the premiere Christie demonstrated a refined
understanding for the spaciousness of the score. The carefully prepared
performance of Greyís lush and loving music brought home just how original
the composer is in his understanding of the design of music. He has created
here a collage of colors that brings the many voices of soloist, choir and
instruments together with near-magical homogeneity.

In ìEnemy Slayerî Grey might well have composed cthe requiem that
laments Americaís unfortunate adventure in the Middle East. The work
deserves to be widely performed. Michael Christie will conduct ìEnemy
Slayerî at the Colorado Music Festival in Boulder, Colorado, on July 24 and
25, 2008. Soloist at that time will be Daniel Belcher. For information, visit
www.coloradomusicfest.org.