Its main set is a pale, dank, tiled basement ñ the excesses of the banquet in the palace above are glimpsed on an upper level which sits just below the proscenium arch. The ‘below stairs’ angle may be one of director David McVicar’s trademark devices, but here it is evocative of a sewer, an underworld, a space suspended between this world and Hell. Designer Es Devlin has exercised faultless attention to detail in bringing this concept to life.

The people who inhabit this place are as devoid of human emotion as the animal carcasses we see hanging in one of the basement’s doorways. Following Narraboth’s suicide, the others make a point of picking their way around his fresh corpse as if to demonstrate just how little his death matters to them.

Nadja Michael’s Salome is credibly young and nubile, slinky, poised, if not really sexy. She produces a huge sound considering her physical build, and it gleams on top when it is in tune, though she does have a few intonation problems. Her fixation with Jokanaan is quite understandable, as Michael Volle dominates the stage in both voice and presence even when he cannot be seen.

The Dance of the Seven Veils is not done as a conventional striptease but as a dream interlude after the modern fashion. It is a subtly disturbing fantasy sequence, where the tiled walls give way to black depths with cinematic projections which suggest Herod’s sexual obsession with Salome from early childhood. This unspoken suggestion of Salome’s lifetime of rape by her stepfather makes sense of her scheme to destroy both Jokanaan and Herod himself. At the end of the dance, Salome leads Herod off for one final tryst ñ this time on her terms ñ before making her fatal demand.

Robin Leggate was a late substitute as Herod. If he lacked the physical presence and vocal weight of Thomas Moser, who he replaced, he certainly found an element of black comedy in his petty, bickering interchanges with Daniela Schuster’s Herodias.

Against the murky grey-white background, there is an emphasis on the luridness of Herod’s court ñ represented by Herodias in her glittering turquoise gown ñ and of Jokanaan’s murder, when the naked executioner emerges from the cistern dripping with the prophet’s blood. However, Salome herself is a pale sylph in a glistening white dress, and Herod’s fantasies of her during the Dance of the Seven Veils have a crisp monochrome purity. From Herod’s perspective, her horrific request for Jokanaan’s head comes as a complete surprise from someone he sees as a perfect specimen, an alabaster ornament. 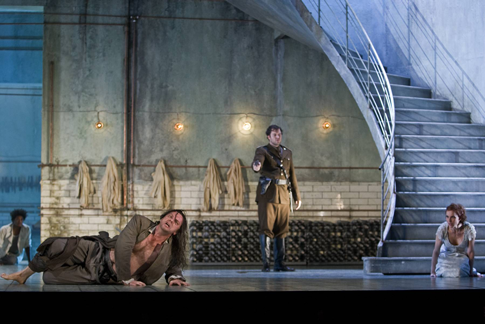 And as this beautiful creature’s white slip and limbs become drenched in Jokanaan’s blood, the assembled court ñ at first averting their eyes in revulsion ñ gradually turn towards her and become transfixed on the spectacle, just as Herod’s and Narraboth’s eyes had always been inexorably drawn in her direction.

Orchestrally, the standards were generally high; Philippe Jordan certainly has an understanding of how to bring out the horror in Strauss’s opulent score, though some untidy brass playing took the shine off the texture.