In fact, so complete is the restoration that the program book describes it as a “new production (sets) owned and constructed by San Diego Opera.” However, the costumes are credited to the Metropolitan Opera, with the premiere date given as December 22, 1977. Furthermore, the program features a tribute to Schneider-Siemssen written by San Diego’s scenic and production designer, James Mulder (working with Alexander Schneider-Siemssen).
Anyone who has seen the DVD of the Metropolitan production, featuring Richard Cassilly, Eva Marton, and Tatiana Troyanos, would have recognized the sets seen in San Diego. The most remarkable feature of the handsome, very traditional staging is the seamless transition from Venusberg to the valley outside Wartburg. With the use of a special scrim and lighting, the change happens before the audiences’ eyes, and soon has prompted a wave of applause to swamp over the music. The second act hall lacks any imaginative transformation effect, but is lovingly detailed.
At the final performance of the run, seen February 3, conductor Gabor ÷tvˆs managed a spirited reading of the score through the first two acts, after some less than pleasing ensemble and intonation in the overture. A worthy cast at first seemed somewhat muffled by the atmosphere of a dusty revival, albeit without the dust. Michael Hampe’s direction certainly brought little new to the drama. Robert Gambill knotted his brow as he pleaded with Petra Lang’s Venus to let him return to Wartburg. The good men of Wartburg stamped around almost like extras from Braveheart, with too much hearty spear-waving. In act two, Gambill’s Tannh‰user strutted around with rock star-petulance as he sang his song of defiant eroticism, making Camilla Nylund’s pretty Elisabeth look like a star-struck audience member on Wartburg Idol. Reinhard Hagen as Landgraf and Russell Braun as Wolfram brought some appreciated reserve and class to their roles.
If the first two acts passed by pleasantly but unmemorably, the last found the show finally pulling together into something special. Away from Gambill’s hero, rather dull to that point, Nylund’s pliant voice produced some aching beauty. Then Braun stepped forward to deliver a gorgeous hymn to the evening star, which would surely have received a long ovation if Wagner had allowed such (a couple of lonely claps tried to force the issue). Then Gambill reappeared, transformed both as the character and as a performer. He found real anguish and delivered his long narration with both vocal force and fine dramatic detail. Although the sudden appearance of the Pope’s blooming staff (so to speak) could have prompted a few giggles, the climax found all the pathos that Wagner would have wanted, and the final chorus soared majestically. 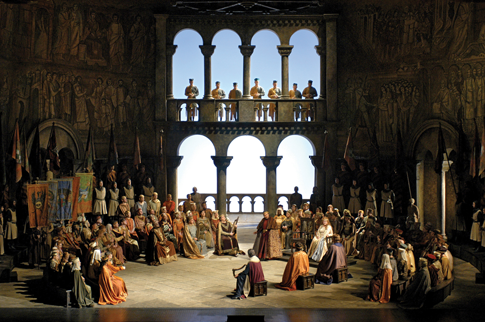 So as Tannh‰user the man found his redemption, so did this production of Tannh‰user. With its 2008 season off to a strong start, San Diego Opera now looks forward to a rare staging of Donizetti’s Mary, Queen of Scots, set to open February 16th.
Chris Mullins