When I
first heard the score of Peter Grimes on a recording, this grinding
melody seemed an inexplicable change of rhythm. When I then saw the opera, in
a naturalistic production (as most of them have been ñ a natural choice in
an opera so free of hyperbolic, godlike characters, so full of pointed
village incident), all became clear to me: Peter the fisherman, has tossed a
rope from his boat onto the shore. In a tiny fishing village, every
able-bodied person helps out ñ they will take the rope to the capstan on
the wharf and wheel him in against the tide. But the villagers ignore Grimes
the pariah, until some of the less snooty types, Balstrode (retired sea
captain), Ned Keene (apothecary who caters to all appetites ñ licit and
otherwise), and Auntie (the blowsy innkeeper who keeps a brothel on the side)
take the rope and wheel Peter in, singing a song in proper style. Britten
gave us landlubbers a glimpse of coastal life, revealed Grimesís position
as outcast, and introduced one of the dozens of fascinating moody, tangy, not
quite pretty melodies that enrich this extraordinary score.

This is sung very well in John Doyleís stylized staging at the Met ñ
but whatís going on? The singers step in an ungainly fashion, in place ñ
but there is no capstan. To anyone who has not seen a naturalistic staging,
or who has not studied the libretto closely, or who hasnít spent time in a
seaport, the song, the moment, the drama go by the board.

This is my problem again and again with Doyleís artfully pointless
staging. In Act II, a boy falls down a cliff to his accidental death ñ a
death for which Grimes will be blamed. But we do not see this ñ we hear the
faint, thin scream and see Peter staring down a trap door. Unless you know
the opera, you will not understand the scene. (Is this a theater piece or a
concert?) In the last act, instead of coming upon the maddened Peter and
trying to coax him home as in other productions, Ellen and Balstrode stand in
doorways ten feet above him on the stage. There is no link. Ellenís cry
when Balstrode tells Peter to drown himself did not touch me ñ the only
time it hasnít. I donít fault Patricia Racette for it ñ I fault her
position on the stage, high in the wall of doorways. She should be reaching
for Peter with the maternal instinct that is her nature, and only at
Balstrodeís words does she realize ñ still instinctively fighting against
it ñ that she can no longer save him. Worst of all, perhaps, is the great
riot scene of Act III, scene 1 ñ when the townspeople howl for Grimesís
blood ñ the pacifist Brittenís disgusted tribute to the appeal of
so-recently-defeated fascism. Itís not here. The chorus on a narrow apron
of stage forms like a congregation, the individual characters stand like
soloists in a choir ñ no turmoil, no orchestrated roister, no mob, no
terror. Itís a tribute to choral study, not a drama, much less one of the
most shattering moments of political theater in modern opera.

The musical forces performing this walled concert are in exceptional form.
Donald Runnicles deftly weaves the orchestra into a nautical tapestry, and
his light, moody touches are so effective I visualized the sea in its various
moods and colors as Britten played his oceanic instrument. The uneven burst
of bawdy tavern music, for example, that intrudes on the murky tides of the
prelude to Act III, has never felt ñ sounded ñ looked ñ more like a
picture, a video, an impressionist painting of lights reflected off a lonely
pier into the dark, imponderable heaving sea at night. Runnicles leads a
gorgeous performance, always light, always hinting deep, never slacking the
tension; the Met orchestra play like heroes for him.

Anthony Dean Griffey has the sort of lyrical tenor Britten wrote for ñ a
tenor much in the mold of Peter Pears, Brittenís partner and muse. The
dreamy, fantastic side of this fisherman out of water comes through, but I
could have used more of the hearty brute than Griffey is able to imply. It is
right that he looks more haunted than the romantic leading man, but I never
felt ñ as I did when, say, Jon Vickers sang the role ñ that Grimesís
apprentices, or Ellen whom he loves, or anyone else was in any danger from
Griffeyís Grimes. He couldnít hurt a sea urchin. I wanted more of the
murderous determination that I heard in his performance as Abraham to David
Danielsís Isaac at Carnegie Hall in Brittenís Second Canticle. But he
always phrased beautifully, and the soaring reaches of the part are within
his compass.

Patricia Racetteís Ellen was a warm woman under rigid self-control ñ
trying to persuade Peter to share her generosity of spirit, rounding on the
townspeople who persecute him, and stuck up to no one ñ we would not expect
a respectable schoolteacher to be on easy terms with Auntie and her
ìnieces,î but Ellen is no snob, and Racette gives us a rounded self that
this fixed, awkward staging does not permit enough scope.

Among the operaís many minor but important characters, Teddy Tahu
Rhodes, a great tall fellow with a great big baritone, made an auspicious
debut as an unusually imposing Ned Keene; Anthony Michaels-Moore was an
unusually subdued Captain Balstrode; John Del Carlo a Dickensian Lawyer
Swallow; Jill Grove (who should be singing lead roles, as she proved in the
Chicago Frau ohne Schatten) a wry Auntie; and Felicity Palmer
girlish as mad Mrs. Sedley. 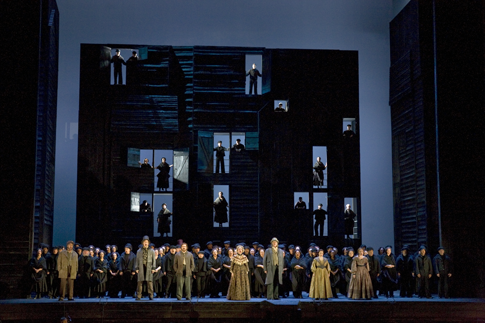 A scene from Britten’s Peter Grimes.

Twenty years ago, Met choristers told the New York Times that Grimes was
their favorite opera, since they are not in the background of the plot but
are actually the principal antagonist ñ the creature that destroys Grimes.
They certainly sing the piece as if they loved it dearly. (Britten, like any
great British composer, writes juicily for chorus. If you got it, flaunt it.)
A friend pointed out to me at this performance that the orchestra is silent
in most of Grimesís mad scene ñ the only sound apart from his monologue
is the spooky moan of the mob muttering ìGrimes!î in the distance, one of
the weirdest effects in all opera, wonderfully evocative of the sea in a fog.
ìBut theyíre giving him his pitches!î my friend realized. Britten
combined the fog effect with the desired musical result. Now thatís
genius.