Mozart was eager to make a splash in the music scene of Vienna, to which
he had just moved, and in the opera scene of Central Europe under a
discriminating and forward-thinking patron, Joseph II, and ñ not a little
ñ as a figure in the Enlightenment, the shining of a new light of universal
brotherhood and citizenship in which glow humanity would emerge from the
prejudices and bigotries of old. With his delicious Seraglio, Mozart
failed and he triumphed: during his brief lifetime, it was the most popular
of his operas, a hit throughout the German-speaking world.

Joseph II, himself newly liberated from the restraints of his mother and
ìco-regent,î Maria Theresa, was seeking new ways to give unity to his
disparate realms (from Transylvania to Flanders to Milan). Nationalism seemed
a likely card to play and in that cause he created a German national theater
in Vienna to which the most talented actors and playwrights were invited.
That success inspired him to attempt a German opera company, replacing all
the Italian stuff, perhaps building on the ballad-operas that an English
import, The Beggarsí Opera, had spun off all across the land. This
new plan was not a success ñ none of the contributions to it were very
inspired except Seraglio, the last, for which both Mozart and Joseph had the
highest hopes.

Here, as so often, Mozart got carried away: He paid his audiences the
compliment of assuming they were intelligent enough to understand what he was
up to. Upon a traditional escape-plot, with exotic music inspired by
Janissary marching bands, he devised a fable of true love tested ñ and
rewarded, thanks to an enlightened pasha who, alas, never gets to sing
anything. But for the resourceful Belmonte and stalwart Konstanze, whose high
birth must be demonstrated so as not to let the message seem too
revolutionary, Mozart composed music as difficult to sing as it is wonderful
to hear. Indeed, only a most Italian-trained singer could possibly get
through Konstanzeís music in any decent shape ñ she may well be the
single most difficult role in the dramatic coloratura repertory.

This was not at all the Germanic simplicity Joseph was looking for, and he
was a little startled: ìToo beautiful for our ears, my dear Mozart, and a
monstrous lot of notes,î he is said to have commented. Those inclined to
hoot at the monarch for his folly should try to sing either lead role before
they do so, or listen to the hash most top-ranked divas make of Konstanzeís
arias, whose demands Mozart enhanced to display the phenomenal agility of
Salieriís mistress, Caterina Cavalieri, who created the part. A soprano
once told me, ìThey say ëMartern aller Artení is the toughest thing to
sing in the entire repertory, and itís true ñ because ëAch ich
liebteí cannot be sung!î 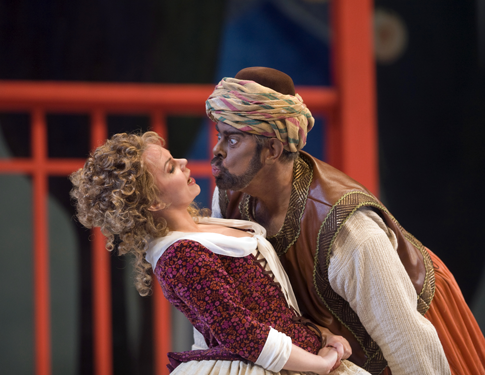 Diana Damrau made rather a splash last fall singing Pamina and the Queen
of the Night in alternate performances of The Magic Flute ñ but
Konstanze is a tougher part than either of those, and Damrauís attractive
but not abnormally agile soprano was simply not up to it: colorless trills,
tuneless runs, desperate and ill-supported leaps at the pitch that one
canít really justify by reference to her desperate situation in the plot.
There were some lovely triplet figures in ìAch ich liebteî and she got
through ìMartern aller Artenî honorably but not pleasurably. She was less
ìconstantî than one had hoped.

Alexandra Kurzak, who has also made a success of the Queen of the Night,
had a far easier time with the far easier role of Blondchen.

Matthew Polenzani has sung Mozart roles ñ including Belmonte at the City
Opera a few years ago, but even more so Ferrando in the Metís last run of
CosÏ fan tutte ñ with a grace, an elegance, an ease of phrase
from top to bottom that place him among the finest Mozart tenors not only of
this generation but previous ones ñ one thought of Wunderlich, Valetti and
Gedda. But this time around his Belmonte was rough going ñ he hit the
notes, but the sound was less than delectable, a gravelly quality creeping
in. Far more pleasing was the tenor of Steve Davislim, a debutant, as
Pedrillo; his preposterous ìMoorishî serenade in Act III could have gone
on for three or four more verses without wearying the ear. All four singers
ñ despite a little shrillness from Miss Kurzak ñ reached their peak
during the splendid loverís quarrel quartet that ends Act II, the first
ìconversationalî concertato in opera, from which so much was to
develop.

Kritinn Sigmundsson, a witty actor with a fine, house-filling, orotund
bass, was almost all one could wish for in an Osmin ñ the one character
untouched by the ìenlightenedî multicultural benevolence, and therefore
the one who makes that achievement seem as impressive as it is. Sigmundsson,
alas, lacks the low Fís and Eís that a great Osmin requires ñ that Kurt
Moll and Matti Salminen had ñ but gave such pleasure it was easy to
overlook this flaw. Matthias von Stegmann seemed a bit effete in the
non-singing role of the sentimental Pasha ñ he did wave those long-stemmed
roses about a bit much. (Like many other admirers of this opera, Iíve
always regretted that the Pasha does not sing ñ couldnít we transfer an
aria or two from Mozartís unfinished other Turkish singspiel,
Zaide? And maybe drop one of Belmonteís four repetitive arias to fit
it in?) 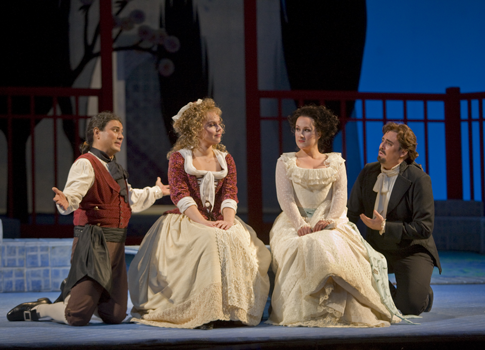 The old John Dexter production is restaged at each revival; there is
nowadays more beefcake on display (Dexter would have enjoyed that), but in
general Max Charruyerís revisions are sensible, coherent ñ and funny.
David Robertson made rather scrappy work of the exquisite overture, and the
flutes were rackety during ìMartern aller Arten,î but this lovely little
masterpieceís many parts fell by and large neatly into place.