Perhaps they own too many copies of the entire opera already but are attracted to one or two members of the cast on yet another set. Perhaps in a busy life, they really only ever have time or the desire to hear their favorite selections from an opera. And just maybe, in today’s market, the complete set is no longer readily available.
Whatever the reason, lovers of French opera would do well to consider either or both of two sets from Classics for Pleasure’s opera highlights series. The Gounod Faust, with Victoria De Los Angeles, Boris Christoff, and Nicolai Gedda conducted by AndrÈ Cluytens, already enjoys a deservedly high reputation. CFP offers a generous 75 minutes of music, whereas the Puccini sets from this series recently reviewed here on operatoday had well under 60. Still, not that much is heard of Gedda in the title role until his big third act aria. In fact, nothing from the first act appears at all. As strong as Gedda is, having more of De Los Angeles’s truly angelic Marguerite prompts no complaints. Some may regret an arguable lack of elegance in Christoff’s Mephistopheles, but he certainly captures the character’s demonic side. Ernest Blanc makes the most of Valentin’s affecting music. The climatic trio loses some power when so abruptly excerpted, but all in all, this highlights set has ample evidence of why this recording has been so highly esteemed for so long. 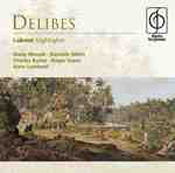 The Delibes Lakme set manages to be even more “French,” with Alain Lombard leading the Paris OpÈra-Comique forces and a cast of Mady MesplÈ in the title role, Danielle Millet as her maid, and Charles Burles as Gerald, Lakme’s English love interest. After Delibes’s wonderful prelude, as enchanting as the best of his ballet music, this set takes the listener directly to the famous female duet. Mesple’s sweet, high-set tone helps make the Indian princess a believable, not to mention attractive, character. She also manages the pyrotechnics of the “Bell Song” with a relaxed flair that benefits the music. The rest of the cast is able, but to be blunt, the score of Lakme, other than its just referenced well-known parts, tends to a generic craftsmanship. All the more reason to be grateful for this highlights set, then.

CFP provides track and cast listings, and a story synopsis tied to the tracks. Without any other notes of any kind, however, the booklet has to be called slim. But for a budget price, both of these sets can claim to be very fair value.
Chris Mullins