Although Cosa raraís eponymous
rare treasure concerns the honesty of a beautiful woman, Opera Theatre surely
enjoyed the play on words in presenting this rarely performed but
once-treasured opera. The company has successfully contextualized Mozart in
its last few seasons by presenting works of his contemporaries, including
GrÈtryís Beauty and the Beast (1771) and Cimarosaís The
Secret Marriage (1792). Vincent MartÌn y Solerís opera continues this
trend, since nearly everything about Una cosa rara reminds us of its more
familiar Mozartian brethren.

Born in Spain two years before Mozart, MartÌn lacked his contemporaryís
astonishing precocity, though by his early twenties he had composed comic
operas for many important Italian towns. He moved to Vienna in 1785, four
years after Mozartís own arrival. The following year each man composed an
opera for Emperor Joseph IIís Italian theater. Mozart inaugurated his
partnership with librettist Lorenzo da Ponte, culminating in Le nozze di
Figaro. MartÌn likewise collaborated with da Ponte on his comic opera,
Una cosa rara. Figaroís modest success in May 1786 was
overshadowed by Una cosa raraís triumphant debut eight months
later. In October 1787 MartÌn penned a follow-up hit with the immensely
popular pastoral work Líarbore di Diana. Less than a month later,
Don Giovanni opened in Prague. In it, Mozart acknowledged his
peerís popularity by quoting a tune from Cosa rara during the Act
II dinner entertainment. These textual and musical links to Mozart are not
just historical happenstance, but structurally important in Cosa
rara. Da Ponteís influence weighs heavily, with both the plot and the
characters echoing Figaro and CosÏ fan tutte. Although
MartÌnís musical style lacks the spice of Mozart at his best, Cosa
rara is perfectly passable as good 18th century opera. For us just as
for the Viennese, MartÌnís pleasant pastoral ditties digest easily.

Stage director Chas Rader-Schieber conceived Opera Theatreís Cosa rara
as a farcical world of warped whimsy, albeit with a rather friendly touch.
His vision was amply fulfilled by the aforementioned sheep on wheels, pink
flamingos, garden gnomes, etc. These flamingos extended beyond mere props,
even decorating the outdoor gardens at intermission. The set and the costumes
seemed to get as much or more attention than the music, since each
characterís entrance was accompanied by applause or laughter. The costumes
continued to get more and more outlandish, culminating in the high (or low?)
point of the Queenís Act II hunting outfit, which featured giant pink
glittering antlers affixed to her head. It was all extremely silly, but the
cast (and audience by extension) seemed to have a ball.

Although the visual spectacle of this production dominated at times, the
vocal performances were solid as well, with some truly excellent moments.
Soprano Mary Wilson was both impressive and endearing as the dotty Queen of
Spain, and she certainly seemed to enjoy her silly onstage shenanigans. She
wowed the audience during many of her numbers, particularly the virtuoso
rondo in Act II. A great example of Cosa raraís more elevated
musical style for the noble characters, Wilson nailed the difficult technical
passages in this aria with finesse and good taste in ornamentation. Her son
the Prince was interpreted in a delightfully hammy manner by tenor Alek
Schrader. With his over the top pink and black sequined costume, his platinum
blond wig a cross between Madame Pompadour and rockabilly ‡ la Jerry Lee
Lewis, Schrader titillated the audience throughout. His difficult Act II
recitative and aria was very nicely sung, although perhaps one might desire a
little more power in the finish. Corradoís part, sung by Paul Appleby, was
much less substantial, with only short solos. 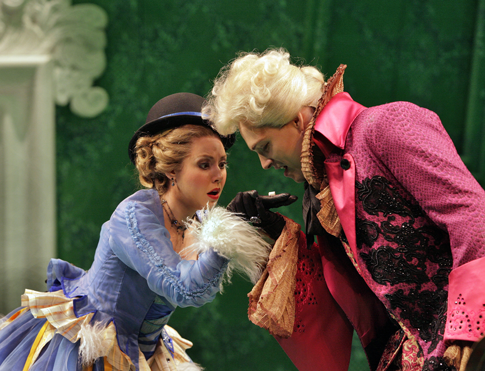 On to the peasants! Soprano Maureen McKay was absolutely delightful as the
ingenuous shepherdess Lilla, and had the audience in stitches from her first
entrance, running frantically onto stage and literally throwing herself at
the Queenís feet. Though this particular performance had a few isolated
strained notes in the higher register, McKay has a lovely clear voice, and
her perfect acting really helped make the production. Lillaís lover Lubino,
a rather dimwitted impetuous shepherd, was well-served by Keith Pharesí
rich baritone voice and excellent diction. Phares particularly amused the
audience with his ridiculous Act I parody of a vengeance aria. If Lilla and
Lubino represent the perfect shepherd couple, their counterparts Ghita and
Tita offer (still more) comic relief. Ghita was saucily interpreted by
soprano Kiera Duffy, while Matthew Burns took the bass role of Tita. The two
bickered impressively, interspersing their arguments with hilarious make-out
sessions. Both singers had some of the more difficult patter singing in
Cosa rara, which they managed with aplomb. Matthew Burnsís voice
was especially impressive, as was his stellar diction.

The orchestra members, drawn from the Saint Louis Symphony Orchestra, were
well conducted by Corrado Rovaris. They performed the 18th century style
cleanly and followed the singers sensitively, with the only minor shortcoming
being the occasional trampling of forte-piano alternations.

Hugh Macdonaldís new English singing translation certainly added to the
hilarity of it all. He clearly reveled in fashioning silly rhymes such as
mooning and spooning and swooning, and even alerted the audience to the
arrival of the melody famously quoted in Don Giovanni. His new
translation played a major role in the successfully slapstick comedy of this
Cosa rara, cramming in jokes, puns, wink-wink references, and
general silliness by the handful.

Opera Theatreís rare treasure in this performance seemed to lie not in
the revitalization of some forgotten masterpiece, but in presenting an opera
completely without pretensions, a perfectly frivolous summer treat.