The event, which was free to the public, included an up-close interview with
Franco Zeffirelli, performances from his Metropolitan Opera colleagues, and a
signing of a limited edition of a hagiographical book about his Met
productions as well as other vast memorabilia that documents the career of
the award-winning producer and director of opera, theatre, film and
television. 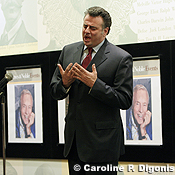 Marcello Giordani performed the aria Nessun Dorma magnificently,
dedicated to both Franco Zeffirelli and to the late Luciano Pavarotti. Later,
Marcello Giordani joined Aprile Millo for the love duet from Act I of
Tosca. Their voices were golden and clearly gave flight to Franco
Zeffirelliís visions of opera. Baritone Mark Delavan performed as well to
the delight of the audience. The performances were followed by an interview
with Ira Siff. Franco Zeffirelli, as he settled into the sage green chair
that awaited him, spoke fondly of intriguing memories and kept the audience
captivated in the style of all Zeffirelli productions.

[Reprinted by permission of the author from Metroway ó The Online Guide to
Everything New York.]