The Metropolitan Operaís database, for example, shows that it has been
performed there more than 1,000 times since November 1886. The number of
performances has declined in recent years, largely because of the workís
cost of production, the workís vocal demands and the workís relative
conservatism. Nonetheless, Aida holds an important place in
Verdiís oeuvre and todayís repertoire. As Roger Parker has noted:

Aida remains the most radical and ëmoderní of Verdiís
scores: its use of local colour. Aida, constantly alluding to its ambience
in harmony and instrumentation, is the one Verdi opera that could not
conceivably be transported to another geographical location. In this
respect it was an important indication of the influence local colour would
come to have over fin-de-siËcle opera, and an object lesson on the
delicacy and control with which this colour could be applied to the
standard forms and expressive conventions of Italian opera.

Before me are DVDs of two highly disparate productions of Aida.
One is a production presented at the Arena di Verona. Built in 30 C.E., the
Arena is a huge open-air structure that seats 15,000.

The other production by the master of extravaganza, Franco Zeffirelli,
comes from Teatro Giuseppe Verdi in Busseto, Verdiís birthplace. Teatro
Giuseppe Verdi barely seats 350; but this lovely theater is truly a small
jewel.

Aida is a colossal work that brings out massive ideas in stage
design. These two productions live up to that concept perfectly. So I will
review these DVDs separately. But I invite the reader to keep in mind the
contrasts between these productions as well as their similarities. Those very
things are a tribute to the mastery of Verdi. 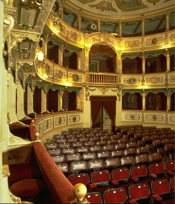 Coached by Carol Bergonzi and directed by Franco Zeffirelli , this
production cast young performers to celebrate the 100th anniversary of
Verdiís death. The size of the theater did not stop Zeffirelli from doing
what he does best-spectacle. What actual sets there are look massive and fit
the aura of what Aida is supposed to look like. Other dramatic views
are achieved through the skillful use of painted or projected back drops.
Albeit small, the orchestra was up to the task in the theaterís tiny pit.
The flute solo was particularly notable.

The singers, who were then hardly in their 20’s, are not well-known. Some
may recognize a few of the names, such as Kate Aldrich and Scott Piper.

Piper possesses a nice tenor voice. As Radames, he tentatively tackles
ìCeleste Aida,î delivering a credible rendition of that monster. He can
sing loud and with a robust sound, be it in victory or rejoicing, yet sings
tenderly and softly in the last duet.

Kate Aldrich performs Amneris. One does not think of a mezzo tackling this
role early in a singerís career, but Aldrich makes Amneris believable.
Although she does not bring the subtlety to it that a Zajick does, that is a
learned attribute. Aldrich is sensitive, cunning yet able to demonstrate the
insecurity of thinking her chosen man has given his heart to another. When
she knows at the end of Act IV that she has lost Radames, her remorse is
clearly felt.

It is a bit disconcerting to see the High Priest, the King, and Amanastro
so youthful looking and sounding. They are nevertheless believable and
refreshing.

Zeffirelli skillfully handles the ìbig scenesî on the tiny stage. He
does not include the ballet for the most part. And the grand triumphal march
is presented as a parade that the waving extras look on. We see their backs
as they jockey for position to see the spectacle. The music is well played so
we do not miss that triumphant moment. As the parade ends, Radames appears in
the Temple where the victory ceremony is performed.

There are other nice touches. In Act III Aida sings of her country (ìO
Patria miaî) as she sits at the banks of the river and reaches into the
water to touch it and bring her wet fingers to her faceÖÖ.almost as holy
water. Aaron sings this great aria convincingly.

My favorite portion of Aida is the ending duet. I want it to be
tender and loving. These two young singers do it with aplomb.

The costumes are lush and lavish. Soft pastels and vivid reds are well
presented. The colors darken as the tragic ending of the opera approaches.

I found this little production refreshing. I appreciated what it must mean
to these young singers to work with the masters like Bergonzi and Zeffirelli
and to be in a DVD that is in world wide distribution. 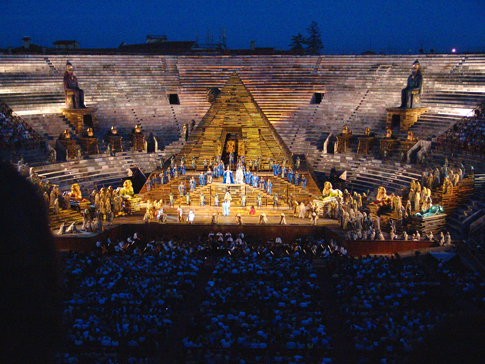 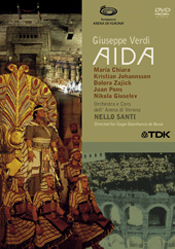 This massive production befits the location. Opera has been presented in
the Arena di Verona since 1913. Production designers have been tempted by the
vastness of the space available to them, and have often used live animals and
enormous sets.

This production follows the traditions of this ancient arena. Huge sets
depicting the temple, trumpeters high above the top of the sets and a cast of
what seemed like thousands (but probably not quite that many!). There are
live horses in the triumphal scene, but no elephants!!

All of the ballet music is there along with the dancers. Nothing is
missing in this extravaganza.

Maria Chiara was arguably one of the great Aidaís of her time. She was
the partner of many a great Radames, including Luciano Pavarotti. This time
frame is late in her career but she still can carry off the role. There are a
few rough patches at the top of her voice but not enough to really complain
about. Her ìO Patria Miaî is lovely and heart wrenching.

When this video was made, Kristjan Johannsson was just beginning his
career, which led him to the Met as well as most of the opera houses in
Europe. His style is rough and direct. His only voice level is loud. I
hesitate to be overly critical in that the location could well be
overwhelming and the tenor may have tried to over compensate for that. When a
bit of a tender sound is called for, as in the final duet, Johannsson is just
not able to produce it. His robust moments, however, are more appropriate.

Juan Pons as Amonastro is worth watching and hearing. He brings to the
role the tenderness of a father and the regalness of a King.

Dolora Zajick is a force to be reckoned with. This voice is truly amazing.
Her acting ability is everything one would want from this Amneris. She easily
makes us hate her, empathize with her and in the end mourn with her. She is
one of the great Amnerisí of our time.

Nello Santi is an old pro and the orchestra gets to show off all its
skills as it traverses Verdiís score. We all wait for the trumpets and
brass in this opera; but there are some wonderful flute solos, as well.

This video is well worth the time to watch Aida as a huge
spectacle and to hear some amazing singing by the women in the cast. With the
exception of Pons, one must bear the male performers to enjoy this
production.