In my
many years of reviewing and observing operas I have often been privy to
magnificent performances, and some not so great; however, the concert given
by Cecilia Bartoli to a full-house at the Musikverein in Vienna has surpassed
expectation and remains at the top of my list as a spectacular live
performance

The air of anticipation outside the concert hall was monumental. Of
course, posters and advertisements of Signora Bartoli’s lovely visage
graced subways, street posts, and the concert district. All of Vienna seemed
to be in a frenzy to welcome this most endearing and talented performer. The
line-up for standing room tickets was unprecedented, and the concert hall was
filled to its very core. In my many years of attending concerts, I have never
felt such energy over one given performer, let alone in Vienna where musical
standards are of high public interest.

For many months prior to the release of her new album, Maria Malibran:
La Rivoluzione Romantica, Bartoli had given interviews and spoken
publicly about her passion and devotion to the artistry of Maria Malibran, a
young and talented singer who died at a young age, and perhaps before she had
achieved the pinnacle of her career. Expressing a profound interest in
musicology, Signora Bartoli has conducted a significant amount of research
for this album, making it all the more interesting to listeners, fans, and
scholars. Although her other albums have been successful, there is something
more intimate about this album, not to mention that it marks her most superb
singing to date.

As the Kammerorchester of Basel arrived on-stage, one noticed that the
platform for the conductor remained empty. The audience was silenced and the
concert began with a performance of the Overture from La Figlia
dell’aria, written by Manuel del PÚpulo Vicente GarcÌa, one of the
forefathers of Italian singing technique. The piece exuded distinct 18th
century attributes and grand dynamic shifts that were well controlled by the
chamber orchestra. The typical melodic influx of classical style with
underlying 16th note rhythms soared into the more than wonderful acoustic of
the Groﬂer Musikvereinssaal. The overture was a pleasant way to begin the
concert. It set the stage for what was to be an emotional and exciting
evening.

The audience, silent, waited for the stage door to open and out glided
Signora Bartoli, in a beautiful crimson red gown. Already on their feet, the
audience welcomed her with enthusiasm and love. Bartoli beamed with pleasure
and welcomed them with as much endearment as they offered her. Not only did
she take center-stage as the singer, she took her place on the
conductor’s podium, facing the audience. On this evening, Bartoli was
not simply the performer, but also the conductor. The orchestra began the
music to the recitative, scene and aria, “E non lo vedo…son
Regina. Bartoli’s colorito and the manner in which she uses
her voice as an instrument is remarkable. Her impeccable use of sotto
voce and the attention she pays to textual inflection is exuberant and
emotionally captivating. She paces herself through each verse and mingles her
voice with the orchestra in such a way that nothing ever seems out-of-place.
In the middle of the aria, she began to employ her explosive
fioritura, which is fiery and seamless. Her depth of range and
approach to every vocal idiom she uses are, perhaps, technically perfect.
Also affective, was the shift in mood she could create, from a happy one to
one that exuded pathos. Her accurate and aesthetically appropriate singing is
imbued with a generosity and genuineness that one must see and hear live, in
order to fully appreciate the extent of Signora Bartoli’s talent. How
brilliant is a performer who can stand and sing with such accuracy and
emotion, and also listen simultaneously to every instrument in the orchestra
and give them cues as to their entrances. Bartoli conducted the
Kammerorchester with delicate and swift movements of her wrists to the
amazement of the audience, who vocalized their feelings of gratitude.

Giuseppe Persiani’s Romanza from Ines de Castro,
“Cari Giorni,” was perhaps the most moving performance of the
concert. Bartoli’s opening lines, “Cari giorni a me sereni
d’innocenza e di virt˘,” brought many to tears. She thoroughly
understands how to use the voice to express emotion, a trait that is
paramount to her artistry. The ominous opening of the Romanza was lyrically
accompanied by solo cello and harp. Bartoli never sings two notes in the same
shape. She is constantly fluctuating and employing different colours, using
straight tone and then spinning with such intensity that one could easily
forget that this is a human voice. It seems metaphysical: of this world, but
shared with a higher realm. A strong silence filled the hall before applause
erupted with force.

After a short orchestral Scherzo by Felix Mendelssohn Bartholdy, to
provide a moment’s rest for the singer/conductor, Bartoli emerged to
sing “Infelice” a scene and aria also written by Mendelssohn. The
long and intricate text was moving and the orchestra was profoundly sensitive
to Bartoli’s instructive gestures. Again, her lines are seamless and
the coloratura that pours from her could be described as one continuous and
linear expression of beauty.

“Her lines are seamless and the
coloratura that pours from her could be described as one continuous and
linear expression of beauty.”

Next, a moment of sheer excitement for the audience as Bartoli sang one of
her famous arias, “Nacqui all’affanno…Non pi˘
mesta,” from Rossini’s La Cenerentola. I will go so far
as to say that this is “exclusively” Bartoli’s aria. No one
can perform it with the same intensity, brilliance, and sheer energy that she
possesses. It is a tour-de-force. The sound that poured from her, the
extensiveness of her range was nothing other than a magnificent gesture of
joy and love. The audience called on her for five curtain-calls prior to the
intermission, to cheer their hearts out for this singular woman whose voice
and joyous presence filled the entire building, and the entire city with
love.

The second half continued with Rossini’s “Bel raggio
lusinghier…Dolce pensiero,” from Semiramide.
Bartoli’s coloratura seemed even more surreal here, with her delicate
shaping and long languid breaths. She once again showed herself to be una
virtuosa. With pure Bel Canto technique at her disposal, she was
able to shift the mood of each section of the cavatina, and used articulation
as an expressive device, never disconnected from the text—a feat that
is difficult in many Bel Canto operas because of the influx of vocal
pyrotechnics. The cabaletta was fiery and an authentic example of an
unprecedented virtuosic instrument. Her ornaments, which may or may not have
been improvised, were all aesthetically tasteful and brilliantly
formulated.

After an Overture from Il Signor Bruschino, Bartoli performed,
“Assisa a piË d’un salice—Deh, calma” from
Rossini’s Otello. Even through the lengthy text, Bartoli kept
every eye focused on her. She was a spectacle all unto herself. The sensitive
harp sequences married with her voice in lovely tranquil moments that moved
many to tears. What is perhaps most endearing about Bartoli is her ability to
make us believe. She is never fake. Everything she sings, she feels. Each
piece was in a different style and yet, she melds them together in one
brilliant ideal of expression. 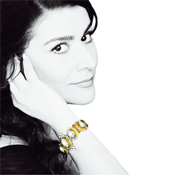 Perhaps the most endearing moment of the evening came in Michael William
Balfe’s, Yon moon o’er the mountains, which Bartoli sang
with such affection. Although she did not sing one German number in a
primarily German-speaking city, she sang this lovely strophic song with
slightly affected English, but so beautiful was her attempt that the audience
exploded in applause, as they had for every other piece, yet the applause
grew in length and intensity as the concert came to an end.

Her final number was Rataplan, written by Malibran herself, which
Bartoli performed with the percussionist of the Kammerorchester, who produced
the sound of the marching drum. It was an absolute moment of energetic
expression for Bartoli. She beamed with happiness as she completed the number
to a magnificent standing ovation that seemed to last forever.

After acknowledging her audience, those who sat behind her, around her, up
in the balcony and in the orchestral section, she turned and shook hands with
every member of the Kammerorchester in a gesture of supreme grace. The work
she has conducted on Malibran and her obvious understanding of this music, in
the most detailed sense, culminated in this performance; and yet, Bartoli was
not willing to take all the credit. She openly expressed her respect for
these performers who were able to help her bring her project to life.

The applause continued for many moments, and even after having received
numerous bouquets of flowers, she emerged again to sing part of
Rataplan, but this was not enough for the audience of course, who
began to push their way toward the stage. Those in the standing room were
pushing their way into the concert hall, as well, from outside the house.
Graciously, Bartoli sang Nacqui l’affanno again, and this time
she purposely brought the orchestra to faster speeds to increase the speed of
her coloratura. In a moment of genuine communication, she held a high note
while putting her hands in the air and waving with both hands to the
audience, who waved back at her with exuberance. The concert was over and the
smiles and tears of this audience lasted out the door and into the night.

I had the distinct pleasure of meeting Signora Bartoli after the concert.
After several hours of signing autographs, she emerged out the artist’s
door with her mother, who has supported her and been her teacher and coach
since a young age. With a smile on her face, Signora Bartoli graciously
accepted my praises and we exchanged cordialities in Italian. My comment to
her was one of great respect for the work she had done, but my comment to
concert-going audiences is this: For many years Ms. Bartoli has been often
criticised for the size of her voice, not being big enough, and it is my
professional opinion that the voice does not need to be large in order to
communicate expression, emotion, and musicality. There are those with voices
larger than hers who fail to communicate as she does, and whose technique is
far from what hers is. It is a voice that touches you in the most intimate
emotional place, no matter where you are seated. Furthermore, I would argue
that there is a significant amount of power in Ms. Bartoli’s voice and
the technique is more than impressive. Oftentimes society is met with
something that is out of the norm; immediately, certain individuals are quick
to place ideas upon it that really have nothing to do with the truth because
it frightens them or because they do not fully understand what it is. Ms.
Bartoli’s talent is extraordinary and hers is a musical truth: to bring
joy, to those who wish to feel it, through her voice. There were surely many
people in that concert hall who had had a difficult day at work, or some who
may have been suffering losses, and she single-handedly was able to change
their mood and affect every single person there in a positive light. Although
there are my talented singers in our midst, who all deserve accolades for
their talents, Ms. Bartoli resides at the very height of them. Hers is a
talent that will be documented for centuries as one of the truly technically
precise, emotional, and devoted performers in history.