If the new company specializes in unfamiliar
repertory ñ in this case the Italian seicento, terrific news if
youíre a Cavalli or Scarlatti fan ñ and I am! ñ my cheers will be all
the happier. If, on attending, one finds the house packed, the crowd excited,
the dramatic values high and the voices exceptionally attractive, there is
very little to do as a critic but spread the word and wish the company
well.

For their opening production, Opera Omnia chose Monteverdiís hardly
unfamiliar swan song, The Coronation of Poppea (1641), choosing to
perform it in a slangy English translation in order to make the stage
activity (often complex, always highly motivated) more immediate as well as
comprehensible to audiences who may not know the work.

I first heard the piece well over thirty years ago when the New York City
Opera gave it a sumptuous staging with a large, nineteenth-century orchestra
and large, nineteenth-century-style voices: a top-heavy bore, amidst which
glamorous Carol Neblett distinguished herself with the first total nudity on
a New York opera stage, and Barbara Hendricks distinguished herself in the
tiny role of ìDamigellaî (the Maid) ñ the only memorable singing of the
night. It has been thrilling to watch baroque performance style evolve over
the years: today, young singers know what this sort of music is about, how to
make a goat-bleat trill an effective piece of vocal acting, how to vary the
pace of declaimed monologues, how to be sexy in the duets ñ and to hear
performances like Opera Omniaís, with a band of seven (two theorbos). (One
of the best Poppeas I ever heard was sung over three strings and
continuo.)

The staging was vaguely modern dress, with mixed gender assignments:
Ottone was a male countertenor, Nerone a female alto, Arnalta ñ naturally
ñ a campy tenor in drag (when has Arnalta ever failed to steal the show?),
Valletto and Amore female sopranos in drag. None of this seemed to confuse
anyone. Neither did the ìallegoricalî opening, the ìbetî among
Virtue, Fortune and Love over which one rules mankind ñ but the working out
of the story confused the stage director: Ottone fails to murder Poppea not
because the god of love appears and tells him to stop (as here), but because
Ottone still loves the faithless Poppea and is therefore unable to kill her.
This was the one major annoyance in the staging, which mercifully did not (as
is often done nowadays) make a wild gay orgy of Neroneís drunken carousing
with the poet Lucano. 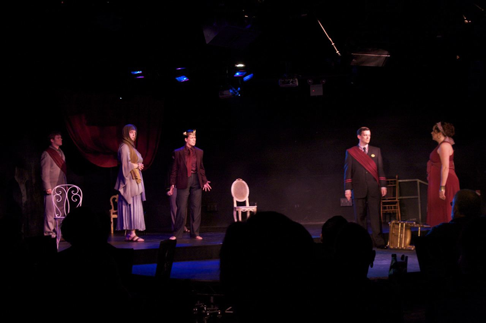 Scene from The Coronation of Poppea

Not so long ago, filling so large a cast with young singers whose voices
were beautiful enough to hold the modern ear through scenes of Monteverdian
declamation would be highly unusual anywhere but in the finest music schools;
Opera Omniaís forces all sang with clear, grateful, seemingly effortless
technique, appropriate to the music (no romantic vibratos), and were
personable and ardent on the stage. I especially admired scene-stealing Marie
Mascari as Fortune and the comic valet, Jeffrey Mandelbaum, who projected a
very masculine countertenor, more tenor than alto, as Ottone, and John
Youngís Arnalta, who got the laughs without falling into camp excess.
Cherry Duke made a fine, unusually masculine Nerone, if not quite the
adolescent punk the score implies (or is it just that I canít forget David
Danielsí strutting, finger-snapping sex-lout in the role?). Steven Hrycelak
held down the low end well ñ if not the very lowest notes ñ as the
philosopher Seneca, whose gravity (in contrast to all the other charactersí
frivolity) is underlined by his being the only really low voice; Molly Quinn,
as the confused Drusilla, seemed to have two voices, a soubrette soprano and
a darker alto; both fell pleasantly on the ear, but she should find a way to
mix them in more suitable proportions. Melissa Fogarty was an insufficiently
weighty figure as the bitter Empress Octavia ñ perhaps the suitcase she
carried in her final scene distracted us from her tragedy. Hai-Ting Chinn
sang the whorish Poppea elegantly, but without the deep sensual feeling that
Poppeas like Troyanos have brought to this music. Still, her final duet with
Ms. Dukeís Nerone was the perfect conclusion to waft us into the night in a
cloud of erotic reverie: Ah yes, back in 1641, this is why opera
caught on.