Cavalleria rusticana, or ‘Sicilian Revenge’ in Sean O’Brien’s
translation, was psychologically insightful and dramatically compelling. The
whole piece took place sometime in the 1940s inside a tiny village hall, with
murky walls and an oppressive low ceiling, an uncomfortably intimate
microcosm of a community in which everybody knows each other’s business. All
human life was here, from the illicit out-of-hours assignation between
Turiddu (Peter Auty) and Lola (Fiona Murphy) to the village women preparing
an Easter dinner. The importance of this central space was underlined by the
centre-stage presentation of the Siciliana at the start and Turiddu’s
graphically brutal murder at the end, both of which Mascagni envisaged
occuring in the distance. Only Jane Dutton’s rejected Santuzza, fidgety and
obsessive, remained on the periphery, coming into the central space for her
pivotal scene with Roland Wood’s threateningly masculine Alfio.

Ed Gardner’s punchy conducting complemented Auty’s red-blooded ardent
tenor especially well, and brought out the opera’s almost constant sense of
raw heightened emotion which the piety of the Easter Hymn and the calm
respite of the Intermezzo serve only to accentuate.

The addition of a mentally-disabled brother for Turiddu could so easily
have come across as a cheap theatrical clichÈ, but his one line announcing
Turiddu’s murder, normally reserved for an offstage woman’s voice, had
devastating impact.

The English translation was somewhat hit-and-miss, but the only real
problem — and it was a big one — was the incongruity of the drab
indoor setting with Mascagni’s lush Mediterranean score. Jones’s production
was a riveting piece of theatre in its own right, but the music seemed almost
incidental to it.

After the interval, a surreal repeat of the ‘Cav’ curtain call heralded
the descent of a new, bright orange curtain. We were thrown into the environs
of a British provincial theatre sometime in the 1970s, about to welcome the
stars of a TV sitcom for a week-long run of a cheesy bedroom farce.

This ingenious production was The Comedians, a genuine and
coherent contemporary take on Leoncavallo’s opera, a behind-the-scenes
portrait of a clutch of outdated entertainers whose popularity is based on a
faÁade of cheap laughs and in-jokes. With the exception of the bird aria,
which didn’t make a lot of sense out of its natural context, the whole affair
worked extremely well and was in a completely different class from your
average half-hearted opera ‘modernisation’ which tends to be riddled with
inconsistencies. Lee Hall’s English-language version was again more a
reinvention than a translation, designed specifically in conjunction with
this staging, renaming the characters to suit the context. These were
recognisable characters, in equally recognisable sordid liaisons and public
breakdowns against the backdrop of an impeccably-realised backstage
environment by the set designer Ultz. 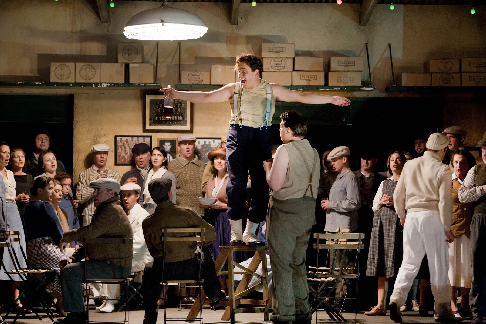 Although the characterisation was uniformly excellent, the singing, it has
to be said, was variable; Geraint Dodd’s Kenny (Canio) had a softer-grained,
less focused tenor than is ideal in this role, while Christopher Purves’s
Tony (Tonio) was put under some vocal strain in the Prologue. Mary Plazas’s
Nelly (Nedda) and Mark Stone’s Woody (Silvio) were far more vocally
consistent, with strong support from Christopher Turner as Brian (Beppe). 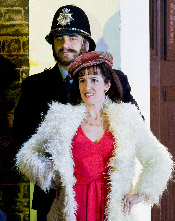 In a stroke of genius the final scene was given on a split stage, as if
the on-stage theatre had been spliced at the proscenium arch and opened out
like a book. Thus we got to focus on the audience’s reactions as much as the
on-stage action. The sense of unease and horror was expertly ratcheted up,
and when Kenny had killed Woody and Nelly and turned his gun towards the
audience, the onstage audience’s collective dive for cover kept much of the
real audience laughing right up to the last moment, until Kenny delivered his
devastating closing line and turned the gun on himself. Suddenly, nobody was
laughing any more. Absolutely brilliant. 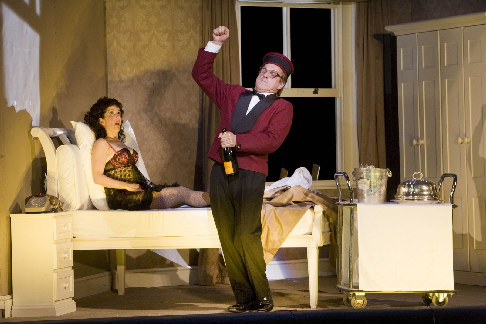 All photos by Robert Workman