For many devotees of Debussy’s great work this might have seemed heresy and doomed to failure, but they would have been wrong. For three nights at Sadler’s Wells’ Lilian Bayliss Theatre in London last week capacity audiences were treated to not only a magnificently innovative production but also to a highly successful and totally sympathetic orchestral reduction of the score that never once sounded thin or lacking in texture and Debussian detail.
Add to this some very promising young voices, nurtured in the tradition of Independent Opera, and this was a fine way to end, sadly, a programme of opera stagings by Independent and to set the bar high for any similar undertakings in the future.
The atmosphere of fatalism, of humans moving within the eternal constraints of their kind, enclosed in the “forest” of the castle’s stifling social norms was brilliantly realised with a dark set consisting of 3 zig-zag wooden walkways supported by pillars which created both a “pit” for the musicians underneath and an exit and entry space, on occasion, for the singers. The castle’s permanent residents, Arkel and GeneviËve, move mainly on wires controlled by “servants” (or masters?)visible at the sides of the walkways, presumably indicating their incapacity to break out of the prison of their own making, whilst the other characters are “free” to move at will. All are dressed in the constricting costumes of the opera’s own time, circa 1902, and everything seems to have a patina of dust and dereliction about it, with both castle and grotto, forest and seashore, merely hinted at with single props and occasional flats. MÈlisande, the focus and intuit of this psychological drama, seems to emerge from these shadows, is illuminated briefly and fatally as she embarks on her relationships with Golaud and PellÈas, and returns to whatever realm she came from, leaving her child as legacy, or, possibly, her curse.
If the design, set and direction (Madeleine Boyd/Alessandro Talevi) worked memorably well, then it was entirely complemented by Stephen McNeff’s scholarly but entirely sympathetic new orchestration for 35 instruments. Never once did one feel anything was missing — the smaller space absorbed the smaller string sound, and other important Debussy sound-world effects were retained by clever reallocation of parts. Significant obbligatos — flute, harp, oboe etc — were all there, and if this put more strain on the soloists, it didn’t show. Stylish and dramatic by turn, effortlessly idiomatic, conductor Dominic Wheeler gave this refined version the attention it deserved.
The singing was uniformly good, sometimes excellent, with the many French speakers in the cast keeping the all-important rhythm and style of the libretto intact. If Ingrid Perruche was a trifle too robust, both vocally and physically, for an ideal MÈlisande, there was no doubting her abilities to interpret the text intelligently. Her most believable PellÈas was the young Norwegian baritone Thorbj¯rn Gulbrands¯y who, after a slightly strained start, sang with fluency and the requisite ardour, making light of the high tessitura. In perfect contrast to him was the dark, resonant bass-baritone of Andrew Foster-Williams as the tortured Golaud, a singer whose voice has blossomed into something very special these past few years. The tone was fully supported and consistent through the range, he has power to spare and obviously relishes this kind of dramatic challenge relatively early in his career; it cannot be long before his Golaud is taken up by a major house. The Arkel of bass FrÈdÈric Bourreau was assured and poignant — he managed to convey a sense of what the old king might once have been — whilst Marie Elliot as GeneviÈve used her warm mezzo to good effect, despite the quite literal confines of her role. Young soprano Caryl Hughes as the child Yniold cleverly whitened her voice to almost boy-soprano tone and was convincing as the innocent vaguely troubled by what he observes around him. Young Czech bass Vojtech Safarik sang his few Doctor’s lines with assurance. 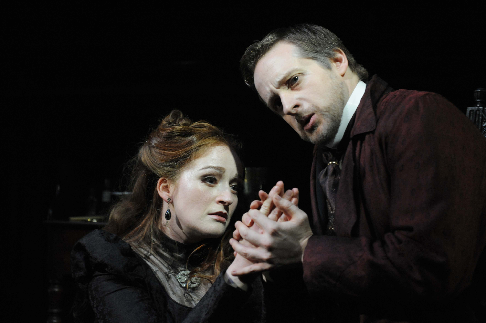 Ingrid Perruche (MÈlisande) and Andrew Foster-Williams (Golaud)
This was opera as it should be but seldom is — innovative yet respectful, ambitious yet pragmatic, and above all committed to the development of talent in all departments. We shall miss Independent Opera’s productions in the UK and can only hope that their ideals are carried on elsewhere.
Sue Loder © 2008

All photos by Robbie Jack courtesy of Independent Opera Company