I thought of this during one of the many patches in John
Adams’s new opera, Doctor Atomic, when nothing much was going
on and there was plenty of time for gathering wool. But the particular
buildup of suspense I reflected on was Mozart’s, in the Act I finale of
his last opera, La Clemenza di Tito. Sesto (you may remember) has
set fire to the Capitol and stabbed the emperor, his great friend, at the
request of the snubbed Vitellia – who has changed her mind, but too
late. The orchestra depicts the rising flames of the catastrophe, aided by
the chorus. The chorus sings no words, only “Ah!,” a cry of
horror, in various tones – we may, perhaps, assume their feelings are
too shocked for words, or that the distance and the flames are turning their
words into undifferentiated noise. In the foreground, Sesto is cursing
himself for his hideous deed. If we have read the synopsis, we know that in
fact he has slain the wrong man, and Emperor Titus is just fine (and will
remain clement). No matter – the alarm of the crowd, the insanity of
the act, the emotions of the evildoer occupy our thoughts. The music rises
and falls, and we are at the edge of our seats: what will happen
next?

There was very little suspense at Doctor Atomic. The bomb will be
tested, it will be a success, the earth will not explode due to chain
reaction, the bomb will then be dropped on Hiroshima, the war will end, the
world will be shocked and uneasy. We all know that. It is up to the composer,
the librettist (Peter Sellars), the director (Penny Woolcock), the conductor
(Alan Gilbert), the singers to make us feel the tension of unanswered
questions: what will happen next? To whom will things happen? (Because these
characters stand in for us, who have been haunted by the bomb all our
lives.)

They do not achieve this. 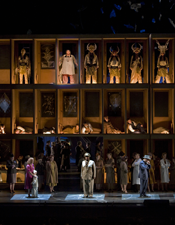 A scene from John Adams’s Doctor Atomic. [Photo by Ken Howard courtesy of Metropolitan Opera]
There is, in fact, a great deal of musical interest going on during
Doctor Atomic – in the pit. There are genuinely intriguing
sounds, developments, inspired innovations of percussion, melodies that spin
and writhe and tingle. As a symphonic meditation on nuclear energy and its
destructive implications, this would be an evening worth spending.
Adams’s purely instrumental music is often impressive, sometimes deeply
feeling. As the accompaniment for stage action and a work of vocal theater,
however, Doctor Atomic let me down.

The libretto was certainly at fault – it’s very difficult to
create poetic, metaphorical feeling on the grandiose level on which this work
pompously and preachily insists if the words you hear remain sullenly,
risibly pedestrian. Bets on the amount of radiation. Nervous but hardly
profound discussions of the implications of the weapon. Pros and cons of
dieting. A sonnet by John Donne that might be a step in the right direction
if it had anything to do with the action, and if the setting were at all
appropriate or at least appealing. (How on earth can anyone make a New Mexico
sky at sunset, or during a thunderstorm, dull?) A vision from the
Bhagavad Gita and a lullaby by a Native American seem designed
merely to cover extra cultural bases – and the lullaby, insistently
chanted to keep us mindful of the coming catastrophe (well, Native American
songs often are one or two lines, repeatedly chanted) does not build
tension – it gives evidence that tension is what they creators of this
work would like to provide. But, words and music, they have no idea how to go
about it. 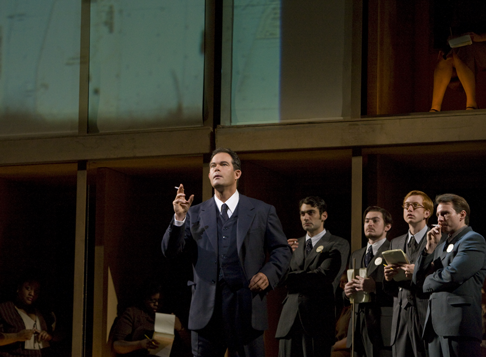 The voices are well produced, but they are deployed as electronic
instruments might be: as notes on a page, not as instruments of emotional
utility. Everyone in this opera is ordinary but no one is human. Even the
gods of Wagner and Gluck get to be human. (I am told Gerard Finley’s
personal agonizing, as Oppenheimer, was poignant on screen, but in the house,
mediated by microphone, it made very little effect. Sasha Cook sounded good,
but whether her character, Kitty Oppenheimer, was agonized by her marriage or
the bomb or wondering what to pay the babysitter was not apparent from her
vocalises.)

The staging is certainly at fault – like the libretto, it harps on
the inanity of the human activity that led to such profound consequences,
without illuminating either one. If you’re going to symbolize
world-catastrophe, you have to make it personal, but Sellars and Adams cannot
make their inventions live. They can’t even make them explode. Oh for a
Mozart. No, there aren’t many Mozarts – oh for a Ponchielli or a
Meyerbeer, journeymen who knew how the machine worked, how to put catastrophe
on stage, how to make it personal and real to a large, disparate audience.
How about a hunchbacked scientist who invents a bomb out of vendetta on his
society and discovers too late that it has torn the skin off his own beloved
daughter? That might be an opera. If you could find a Verdi to compose it.

Instead we get the Oppenheimers’ marital problems, a failure to
communicate, though thanks to the sound system, heaven knows they are loud
enough. This scientist represents this argument, that scientist represents
another one, and none of them are either human or archetypal enough to be
superhuman. Just cardboard. One could forgive that if their music was
interesting, but the vocal lines are uniformly un.

At the Met last spring, Satyagraha, with its diorama staging and
intentionally incomprehensible libretto (in Sanskrit), was a vocal drama of
real excitement and beauty, with metaphorical actions giving access to the
creators’ meditations on significant philosophical questions. There was
no suspense in Doctor Atomic, and nothing in the debate around the
atomic bomb was brought to life in it.

Arjuna’s Dilemma is another recent opera based, in part, on
the text known as the Bhagavad Gita, the most famous (and
philosophical) episode from the Mahabharata, the longest epic ever
composed. With Satyagraha and Doctor Atomic, this is the
third opera I’ve seen this year that drew on the Gita – which has
become the Orlando Furioso of modern opera, as the Gita itself and
its characters grow as familiar to opera-goers as Ariosto’s characters
were to music lovers of Handel and Vivaldi’s day. 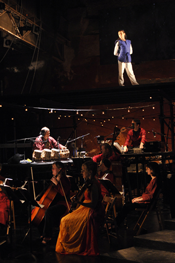 Badal Roy on tablas (foreground) and John Kelly as Krishna (center) from Arjuna’s Dilemma [Photo by Stephanie Berger]
In the Gita, Prince Arjuna, driven (with his four brothers) from
their kingdom by some sneaky cousins, is about to take part in a murderous
battle with the usurpers, and has doubts about the whole thing –
killing, being killed, slaying all those pals he used to hang with, spreading
mayhem through the countryside and no doubt into the heart of many a widow
and orphan and bereft parent. What’s it all for? His
charioteer, however, assures him that life goes on (and everyone who dies
will be born again anyway), that he’s just one cog in the great big
wheel of life which will cease to turn if people stop to question their
proper position. Of course he’s no mere charioteer – he’s
none other than the god Krishna, and vouchsafes the prince a vision of the
universe as symbolized by his ineffable self. (This is the bit that
Oppenheimer saw in Doctor Atomic.) Arjuna, convinced and
enlightened, fights on. (Where was Krishna when Achilles had his far less
worthy doubts in the Iliad? – you may well wonder.)

Douglas Cuomo has turned the Gita into an opera, making use of
amplified voices, Indian percussion, cellos, saxophones, a bass clarinet from
the Western tradition, background film, foreground choreography, titles to
translate the Sanskrit and English text, all the bells and whistles of modern
opera-creation as deployed, also, by John Adams at the Met. The techno
wonders are all here (in BAM’s self-consciously decrepit Harvey
Theater, a credible scene of battle), and the grandeur of the presentation
matches the grandeur of the conception.

But the experience of Arjuna’s Dilemma is a very different
one from the experience at the Met. Partly this is a matter of length –
Arjuna is about 70 minutes, no intermission – and partly this
is a matter of lack of pretension. The story is a wisdom text not an action
text, a central prescription for the life well-lived in Hindu terms, a
revelation of the god, but one does not feel preached at, manipulated, in
this work – and there is no attempt to tie the extraordinary to the
mundane in the way that a troubled marriage and the quotidian concerns of the
scientists totally failed to achieve in the gaudier piece. 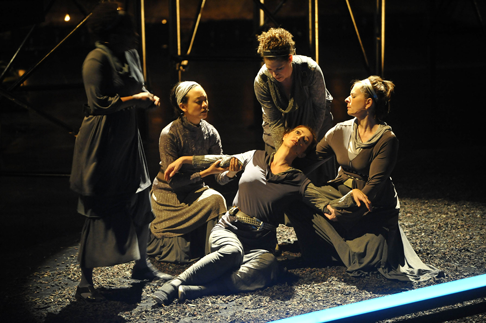 Most of all, Arjuna’s Dilemma has been created by a
composer who trusts sound, a few fine voices and a few fine virtuoso
instrumentalists, to reveal his message in the same way that the great opera
composers trust the sounds will bring to us. The singers’ art (and the
instrumentalists’ art) is the central focus of the work. The message is
not made explicit and ordinary, humdrum, as Peter Sellars’s text did in
Doctor Atomic; its meaning comes to us subtly, open to our different
levels of understanding, on the beauty of the human voice, of melody working
sinuously to take us into trance states while we meditate, line by line, on
the brief story being told us. Tony BouttÈ impersonates Arjuna, dancer John
Kelly (who has also choreographed the piece) plays – but Humayun Khan
sings – Krishna, advising, consoling, manipulating, guiding him. Their
words are taken up, repeated, sung in canon, tossed about, harmonized by a
chorus of five women, and the beauty of the sounds they make expresses a
message never made explicit. We draw our own moral. The instrumentalists,
too, are virtuosos, and take part in the dialogue. No message goes on too
long before it evolves into a new manner of presentation, giving us in this
brief space some hint of the breadth of the message, the universality of
it.

The piece concludes without a gimmick: they have said what they wanted to
say, we have taken in what our individual senses and understanding have
prepared us to take. A tale has been told. We have not been told what to
feel. We feel for ourselves.

Arjuna’s Dilemma is a modern opera, a tale told through
singing.