There are excellent
reasons for this reluctance. Berlioz’s magical setting of scenes from
Part I of Goethe’s Faust (in de Nerval’s translation,
also the basis for Gounod’s opera) focuses hardly at all on the scenes
of action that might be cobbled into a stage drama, but almost entirely on
the poetic “background” of peasants dancing, students drinking,
soldiers marching, fairies flying, devils cavorting, lords a-leaping, maids
a-milking. This scene-setting and the fascinating and novel effects Berlioz
drew from orchestra and chorus to depict it make up most of the evening, and
traditional opera houses, even those equipped with elaborate stage machinery
and full corps de ballet, seldom find it worth the effort. If you know
Damnation at all, from live performance, it is probably from the
concert hall, where the march and the sylphs are favorite show-off numbers,
and two of its arias are greatly loved, Marguerite’s
“D’amour, l’ardente flamme” and
MÈphistophÈlËs’s serenade. Damnation fares a poor fourth in
dramatic success as an operatic Faust, to works of Gounod, Boito and
Busoni – but as a concert piece, it is rather better known than
Schumann’s even less stageable Scenes from Faust. (Louis Spohr
also composed a Faust, even before Goethe published his poem; one wonders
what it can be like.)

As a masterpiece unwieldy by traditional means, Damnation is just the sort
of opera the Met, with its spectacular stage and newly upgraded technical
pizzazz ought to be putting on, rather than twisted interpretations of operas
that worked just fine the old way, such as Peter Grimes,
Lucia or (for that matter) Gounod’s Faust. And now
the Met has done it, and done it to a turn, in a staging by Robert
Lepage (of Cirque de Soleil fame, not irrelevantly), aided by “software
artist” Holger Fˆrterer.

The enormous stage is subdivided into fifteen boxes that become alleys in
a library, rooms in a tavern, a moonlit bridge over a river (and the depths
of that river, and Faust swimming under water), the windows of
Marguerite’s house (no rural cottage for this kid, but the street-long
palace of the Hohenzollerns), the stained glass windows of a church (with
five naked crucifixions) and, at last, the fiery pits of Hell, filled with
naked choristers. Nor are three dimensions enough for this production –
red-coated demonic lizards crawl about on the surface of it, defying gravity,
and soldiers march from stage bottom to top, perpendicular to the wall,
before falling, wounded, three stories, into the arms of lamenting
sweethearts. Marcello Giordani has to climb a ladder down from the
top of the stage (four stories or so) at the evening’s beginning, when
Faust is an old man, not yet satanically rejuvenated, and Susan Graham must
climb up it at the end, to reach salvation. (No one ever said
that route was easy.) The long musical or choral interludes between
Damnation’s few action scenes are danced or acted or mimed by
enormous non-singing forces (and also the Met chorus, which has seldom had so
much to accomplish, while singing to boot), to so busy an extent that I found
it, while thrilling, a sometimes unfortunate distraction from the luxurious
musical performance Donald Palumbo’s chorus and James Levine’s
orchestra were giving to Berlioz’s constantly fascinating
concoctions.

While a very young crowd, accustomed to MTV style in which every note has
its accompanying video image (and to never shutting their eyes and letting
the music make its own image in your head), may be entranced by this
production, especially when it comes to movie theaters, there may be too much
of a muchness for old-fashioned movie lovers who would like to revel in sheer
Berlioz. That curdled opinion only came to me two or three times, but I found
little difficulty concentrating on the evening’s musical delights when
they were set before me. 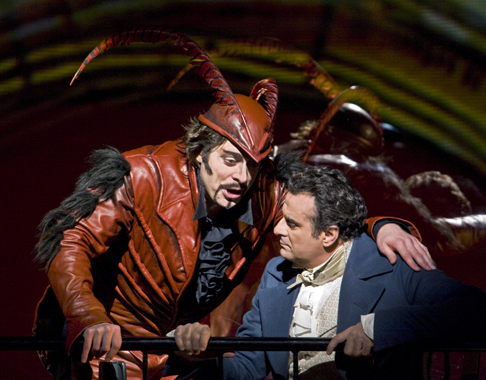 John Relyea (left) as Mephistopheles and Marcello Giordani as Faust

These musical honors, once the dancers, acrobats, and circus and lighting
technicians had all been squared away, were neatly shared. Susan Graham may
not be the most sensuous of mezzos – what would “D’amour,
l’ardente flamme” have been like with Troyanos’s throb in
her voice? – but it was splendid to have her back in her element rather
than, as her Donna Elvira demonstrated, out of it: she sings Marguerite with
total assurance, and fills the hall with the aria’s yearning message.
John Relyea, who is obliged to do many athletic tricks in this production
(but then, he flew at his debut, in Cenerentola, and mounted and
rode a horse in Rodelinda), has a sizable if gruff instrument in
which MÈphistophÈlËs’s wit and slimy charm if not his malice were
always evident. He can win hearts by tossing a feathery leather cap, which he
does at every opportunity. The only less than excellent work came from
Marcello Giordani, who has made a specialty of heroic French roles (Raoul,
Cellini, EnÈe), but here took half the evening to steady his voice, and was
obliged to slide into falsetto once or twice for Faust’s punishing
tessitura. 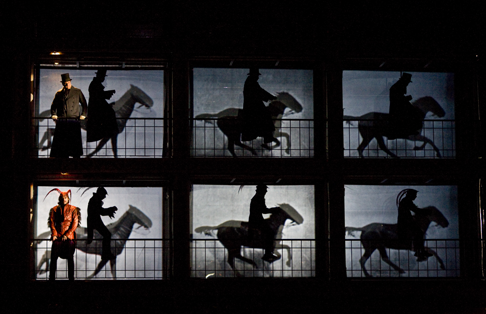 A scene from Part IV of Berlioz’s “La Damnation de Faust” with Marcello Giordani in the title role (top) and John Relyea as Mephistopheles (bottom, in red)

The stars, however, were James Levine and the orchestra that he has honed
to diamond fineness, tricking out every brilliant detail and glow of
Berlioz’s matchless ingenuity, giving us sensual pleasure to survive
any distraction. The acrobats and the special effects were a treat, but I
don’t think I’m the only one who found the evening’s real
delight in the score itself, given such a performance.

This, surely, is as it should be.

All photos by Ken Howard/Metropolitan Opera