Pinkas keeps the energetic sections moving, while finding streaks of drama and unease elsewhere, not unlike that found in the grim tone poems the composer would soon compose, such as “The Noon Witch.”
The tracking of the two sets, helpfully identical, tells at least part of the story, with Chalaba’s earlier performance several minutes shorter on each of the two discs. The only clear advantage one set has over the other is the clear, clean sound of the more modern recording. Pinkas’s darker shadings work well, especially in the second act, set in Hades. But Chalaba’s cast of charismatic singers and the bumptious atmosphere make the opera seem a lot more fun. The singers under Pinkas have fine voices, but without the tang of personality of those in the 1955 recording.
[ 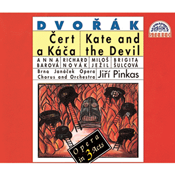 ](http://www.arkivmusic.com/classical/Drilldown?name_id1=3313&name_role1=1&comp_id=32910&genre=33&label_id=212&bcorder=1956&name_id=58194&name_role=3)Neither set, unfortunately, can make a case for *Kate and the Devil* as a lost masterpiece. Dvo?·k could not really compose dull music. His melodic gift, though strangely better exhibited in his symphonies than his operas, continually contributes to a stream of well-designed and colorfully orchestrated music.
Reading – and probably of necessity re-reading – the plot synopsis suggests the opera’s problem. In essence we have a story of a shrewish woman who manages to trick her way out of hell by intimidating the Devil himself. Mixed in with this are a shepherd and a princess, prompting some slams at the ruling class. It might seem refreshing that there is no real love story, and that even in her third act victory, Kate comes off with a cottage but still no husband, as she had hoped. However, there is no character for an audience to truly sympathize or identify with. It’s rather a shaggy dog story, maybe one that has just come in from the rain…
Even Dvo?·k’s most successful opera, *Rusalka*, can’t truly be said to be part of the standard repertoire. But those of us who love the warm-hearted generosity of this composer’s music will want to explore any work of his maturity. Either of the two Supraphon sets of this opera probably belong in such a fan’s collection, but both? Doubtful. Go for modern sound with Pinkas or old-school charm with Chalaba.
Chris Mullins